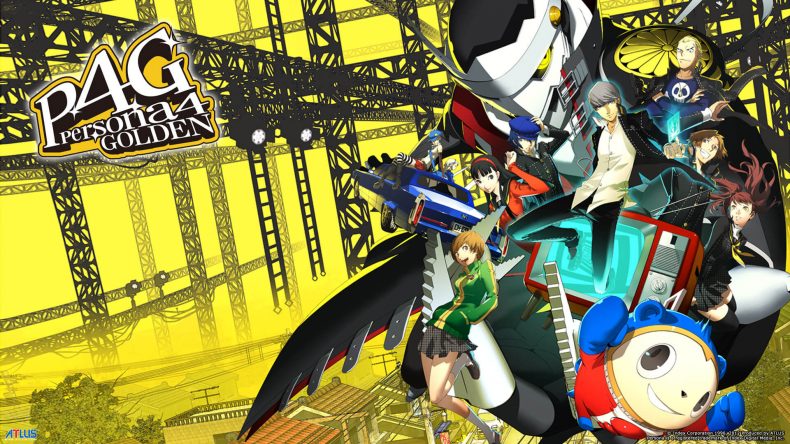 I have never played a Persona game before. In fact I hadn’t just not played one; I had actively avoided playing them because they never looked like my kind of ride. I’ve edited and read reviews of the various games and their iterations ovet the years and never felt overly compelled to get involved myself, but this month I found myself in the enviable position of playing and hopefully reviewing the PC port of Persona 4 Golden, often lauded as one of the best RPGs ever made.

As it happens, this is not a standard review. I don’t need to tell you whether or not you will like Persona 4 Golden, and if you’ve never played one before either my experience is hardly likely to sway you either way. Because after spending some considerable time in Inaba, I’m still kind of on the fence.

Before anyone comes for blood, I’m not saying it’s a bad game. In fact I can see why the consensus is so positive. But I’m learning that to truly love a Persona game you have to truly love a certain way of storytelling. It’s slow-paced, sometimes meandering, and endearingly obscure in a way that only Japanese titles can pull off. It’s dense and deep and complex, and funny to a particular sense of humour, and occasionally plunges into very dark places for the briefest of moments before returning to its colourful world of teenage romance, powerful friendships, and life-saving teamwork. And after-school activities. Lots of those.

So the structure is like nothing I’ve played before. I skipped the original on Vita and then skipped the “Golden” re-release, too, which presents the same game with a lot of extra content sewn into the lining in the same way Persona 5 Royal did for Golden’s successor. Following the player-named protagonist as he travels from the city to the small town of Inaba to stay with his uncle Dojima and cousin Nanako, P4G takes place across an entire school year.

A spate of grisly murders has shocked the small town, and left the police (including Dojima) baffled as to the connection between the victims and the killer’s bizarre method. Stumbling onto a mysterious broadcast known as the “Midnight Channel”, the protagonist and his new school friends discover an alternate world reachable through certain TV sets to which someone is luring their victims – and then killing them. Helped by the cheery yet enigmatic entity called Teddy, its up to you and your friends to battle through the dungeons of this alternate world and rescue those victims. If it sounds weird, believe me, I’m doing it no justice. Because yes, it is weird, but perhaps the strangest thing is how the writing and world-building makes it all seem so eerily commonplace. The kids just accept that this is happening and they’re the ones to stop it, and I couldn’t help think of Stranger Things and the way those friends come together and draw courage from each other.

Teamwork and friendship are huge themes in Persona 4 Golden, standing by one another and risking everything for your friends. In between bouts of the bizarre, you need to attend school, which is deftly curtailed by the time progression system to only show you key moments of each day during which you can interact with teachers, fellow students, your party members and the various after school clubs you can join. Regular events also allow for the deepening of friendships and the strengthening of bonds – as well as your stats.

Traits like Courage, Understanding and Knowledge can be improved upon like strength, dexterity or Vitality in other RPGs, allowing you to grow as a person, not simply as a pigeon-holed class. The higher these stats, the better connections you can build, and this in turn leads to more powerful Personas. And it’s the Personas that give this game and its many battles a sense of gravitas and spectacle. 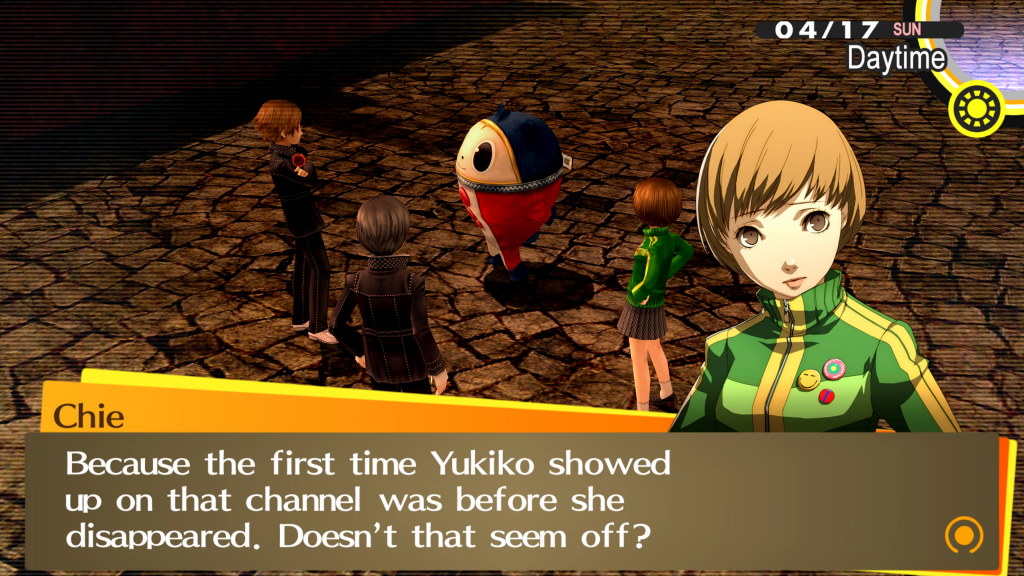 These spirits can be accepted into your heart (the game’s words, paraphrased) to allow you to call on them in battle, each one granting different skills, attacks and abilities. The combat itself is a joy, fast-paced and turn-based, the onus is on using various elements to deal extra damage to your enemies, and you can switch Personas mid battle to maximise your effectiveness. Everything is dependant on SP, or spirit points, which replenish every day or can be restored with various items. These are the fuel for using your Persona, and managing them is key. Fights are great, as you pull out dazzling special attacks and abilities to use against some truly weird and off-the-wall enemies. They’re encountered throughout dungeons as innocuous black or red spirits, but can take many, many different forms. Boss designs are often as mind-bending as the Personas themselves.

But as fun as the combat is, it’s only half the story. Maybe not even half. So much of Persona 4 takes place out in the world and in the town of Inaba, and you’ll be going about a fairly normal life in between jaunts into the other world to rescue friends and fellow students, some of whom will join your party once a malevolent mirror version of themselves is vanquished. In the meantime you can explore the various districts of the town, which open up as you progress and acquire new modes of transport. The most important thing Persona 4 does is encourage you to build relationships, which helps you to unlock the potential of your Personas as well as create new events and influence the story, including the endings.

There’s a lot of dialogue, and I particularly like that it rarely feels like filler despite the fact that you’re often essentially killing time between grinding levels and launching rescue missions. It’s easy to fall for the characters, and not just because it has its share of waifus, but because the characters reveal so much of their personalities as you play – a lot of which is in direct response to things you choose to do or say. The town itself rarely feels overly vital – which is more a product of Persona 4’s 2008 release – but the school does, and by joining clubs and answering teacher questions you’ll develop on a personal level. Despite a few cringey moments and some saccharine undertones of teen romance, I can’t really fault the writing. It makes you care about the characters and the world in a way many games since have failed to do.

Had I played Persona 4 back when it was first released I doubt I’d have gotten into it, and it took me a while this time (it’s a good three hours or so before it really begins), but it wasn’t until I’d started to see all of the various elements and how they gel together that I started to understand why it’s such a beloved series. Am I a convert? Not yet, and I may never be, fully. But I’m glad I finally had a chance to see what everyone else has been telling me for years.