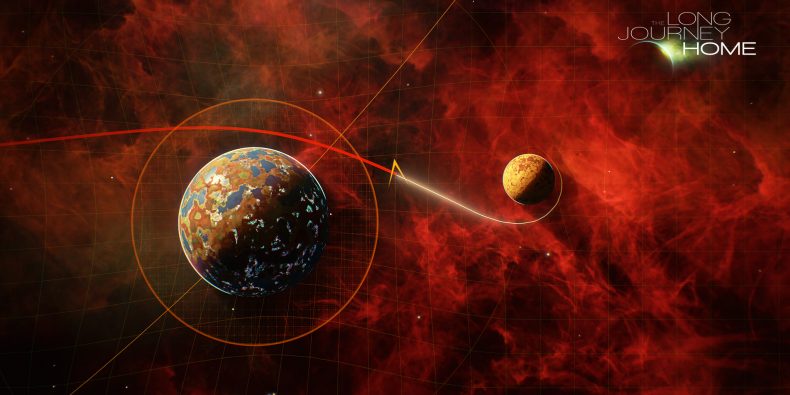 There are some games that mollycoddle you, wrapping you in kid gloves for fear of you not understanding even their simplest mechanics. And at the other end of the spectrum, we have those games that give you the bare minimum to get by. They leave it up to the player to explore and understand how everything is supposed to work. Importantly, learning is part of the experience. The Long Journey Home sits very much in that second camp, by explaining as little of what is going on until it absolutely has to. This forms part of its unique charm, but it’s also its biggest frustration.

A group of astronauts find themselves thousands of parsecs from Earth and must try and return home – a Long Journey Home, if you will. Your role in this is to not only choose your initial astronauts, complete with their various traits and perks that you can use to your advantage but also navigate them through the vastness of space, with the finite resources that you have at your disposal. Gameplay is made up of two distinctly different types. The first is traditional menu-based navigation. Whether it be managing resources you’ve obtained, or checking in on the crew, you’ll be scrolling through various menus, checking everything is in order. You’ll also encounter various alien beings on your travels which you can communicate with. Because these aliens speak different languages, your choices are limited to various topics and approaches. You may choose to “insult” or “praise” something to them. You can ask certain questions regarding something you’ve encountered or indulge in general chit chat. Everything here is selected through drop-down menus, and their responses differ depending on your choices.

The slightly more interactive part of the game is in the spacecraft flight. The main objective is to land on a planet, but it’s not as easy as it sounds. You have to manage momentum, gravity, and thrust. You’ll need a balance between reaching planets, but then gently orbiting close to them without crashing. There’s a brief tutorial for those new to the game on how it works and comes with a bit of practice required to get a feel for it.

The secondary part of flight mode is controlling the lander on planets you want to explore. This time gravity is constantly pulling you downwards towards the planet’s surface. As before you need to utilise momentum and thrust to land correctly. Landing on particular spots means you can interact with areas of interest or mine for valuable resources. These resources can either be used to patch up or refuel your ship, or alternatively sold to make money for you to enhance your ship further for your adventure. Progress is slow and repetitive. You space jump between star systems, with the aim of getting progressively closer to home. But to do this you need to ensure you keep on top of your fuel through either harvesting resources or trading. Furthermore, you need to ensure the well-being of your ship and crew. You do this by alternating between ship and lander navigation, but it never really changes beyond these simple flight concepts. And to make matters worse, the lander control can be very fiddly and frustrating. Gravity and other weather conditions can make landing difficult. Sometimes a simple landing mission can result in serious damage and harm to your crew. This is a far cry from the intention of gathering resources and improve your current situation.

The Long Journey Home takes a relatively hands-off approach to support you through some of its complicated menus and methods of progression. There are brief tutorial messages that pop up, but these are often succinct, giving you the minimum information rather than elaborating on various mechanics. It took me far too long, for example, to understand how I went about trading my resources for money. Such a barrier to entry is off-putting, especially when the controls can be fiddly. In fact, the best thing that happened to me was a couple of hours into my first playthrough. I accidentally managed to run out of fuel, and decimate my entire crew through suffocation. It meant I had to start again from the beginning and was actually a blessing in disguise. I went into my second adventure with more knowledge about how the basics worked. I had a bit more of a clue about what I should be doing, which made the game more fun. And that’s important to note: The Long Journey Home encourages multiple playthroughs and learning as you go. Not least because right from the outset, your choice of crew helps create different adventures. But also because everything you will encounter in this game is randomly generated. From the planets you visit, to the aliens and their opinions and interactions. Your adventure will change each time, and that does create a new experience each time. That uniqueness that does go hand in hand with the impetus being on you to explore and learn as you play. Replaying the same linear system would become tiresome admittedly. However, the random nature of the star systems, means sometimes your progress can be down to your luck rather than judgement. More hostile aliens, or less hospitable planets to explore, can make your journey more difficult if you’re unlucky with your RNG.

That lack of control both in terms of what to expect, and indeed the control of that ruddy lander sometimes, mars The Long Journey Home. It’s clear the ambition here was of a grand scale, akin to the vastness of space you are travelling through. Daedalic clearly had aspirations of a large, ever-changing experience. And truthfully, there’s a lot of fun to be had interacting with some of the more quirky alien races. Not to mention the sense of pride in your nudging ever closer to your elusive goal of getting back to Earth. But the random nature works against the experience and sometimes frustrates an already repetitive and potentially annoying set of gameplay parts. Those that persevere will likely find a lot to like here, but the majority of those who take up the challenge will likely find themselves far too frustrated before the fun kicks in. Either confusion, a lack of control, or bad luck will likely catch you first. Which is a shame because the ideas here aren’t terrible, but they feel spread too thin. A slightly less random, and tighter experience would find a bigger audience ready to take up its interstellar challenge.

The Long Journey Home has some great ideas. But ultimately it is a victim of its grand ambition. Repetitive, often frustrating gameplay further mar the experience.