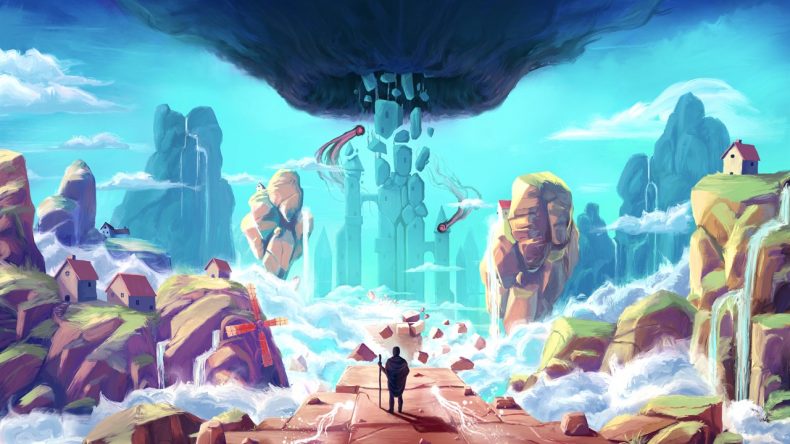 Every once in a while you come across a game that you just click with. It could be some fast paced FPS, a narrative focussed game or even an overwhelmingly difficult game that gives you just the right amount of challenge. For me, puzzle games like The Sojourn just do it for me. Like most people, I like being challenged by games, and while other games can provide difficulty, there’s a difference when it comes to a puzzle. I think it might be down to the fact that there’s usually only one answer. Once that mental puzzle glass has shattered and the solution is made clear it’s a highly satisfying feeling that puzzle games just do so well.

The Sojourn’s puzzles are just the right level of difficultly, stopping just short of them being infuriating. There’s also the additional use of a light and dark side used to complete puzzles. There are some paths that will only appear if you’re in the dark side of reality, and likewise there are paths that are only accessible if you’re in the light side. It’s an interesting mechanic as when you progress through The Sojourn it becomes less obvious if you should be completing the level in the light or dark side. The visuals that represent the light and dark realities are stunning. As you’d expect, the light side is colourful and uses plenty of warm, sharp colours that makes it feel like it’s a permanent Summers day. Even the dark side is pretty in its own way. Using opposing, colder colours like black, purple, and red, you get the sense that this is definitely the bad place. That’s further backed up by the sprouting spikes that block your path, but these are only found when you’re in the dark place.

The puzzles themselves feel like they constantly evolve with each section having its own staple mechanic. The first section of puzzles include platforms that switch the area to the dark reality, but only for a limited time. This is represented by a bar that depletes the more you move around. Later puzzles have beacons that have portal-like beams shooting from it that again take you to the dark reality, but only when you stay within the beams.

The way the puzzles evolve as you go, means that they slowly incorporates each staple from the previous area to the point that the later puzzles have a bit of everything. You are eased in though, as the first few will focus mostly around the new idea giving you a bit of practice before gradually adding in extra bits and pieces. It kind of gives off the message that you’ve grasped this new element, so let’s see how you fare if an old one is added in. There are also bonus puzzles thrown into the mix if you want an extra challenge. These can be identified with either a scroll appearing above an entry point or when you complete a level and a new section appears with a scroll you can collect. These are entirely optional, but they do have some inspirational quotes that heavily point to what the overarching story in The Sojourn is getting at.

Developer Shifting Tides has gone for an interesting theme with The Sojourn’s story. It’s told through statues of the residents of the area that appear intermittently in certain sections. It appears to be one about trusting authority figures, and there are some powerful messages along the way. It’s a strong theme in an otherwise calm and relaxing game, but I won’t spoil the meat of the narrative here, obviously.

While the puzzles and story are enjoyable, The Sojourn has a few issues. Firstly, the frame-rate. While not consistent, and the majority of it runs fine – when the frame-rate dips, it dips hard. It always seemed to drop at the most inopportune time, too. It never happened during a puzzle, instead it would be when a sequence was happening. Whilst merely an annoyance, more than anything, it takes you out of the game and mars the story during cut-scenes. There’s also a bizarre drift that caused my character to strafe to the right automatically. I’ve checked with other games and controllers, but it does seem exclusive to The Sojourn. This too is more of an annoyance as it seems to fix if you tap left on the controller. But it can cause bigger issues if you’re trying some platforming that requires a bit of balance and skill. It really didn’t help when I was moving the camera and not noticing I was drifting, usually at a point where the bar was nearly empty. I quickly noticed I was drifting when the bar depleted and I was back in the light world, meaning I’d have to redo that section of the puzzle again.

Apart from these issues I greatly enjoyed the overall experience. The Sojourn is a good puzzle game with a strong message that’s pieced together with each story revelation and scroll, if you decide to go the extra mile with your collectible hat on. It’s not a long game by any means and can be finished in 3 to 4 hours, but if you enjoy a laid back puzzle experience and are looking for a game to chill and take your time with, then The Sojourn is the one for you.

The Sojourn blends interesting puzzles with a strong narrative. There are a couple of issues but they shouldn't ruin the overall enjoyment.