The Mystery of Woolley Mountain review 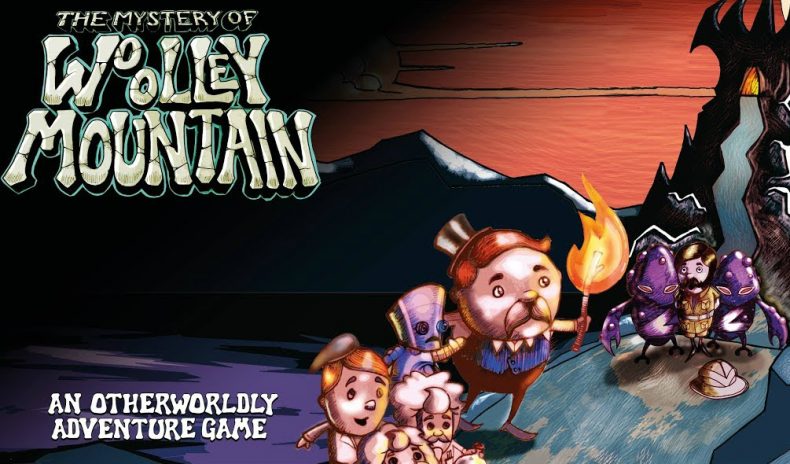 When you think about it, the point-and-click genre gets the wackiest story-lines. Whether it’s an anthropomorphic tentacle hell-bent on taking over the world, or a young lad taking on a very odd pirate-based job interview, the settings are always crazy, and the plot-lines even more so. So when faced with The Mystery of Woolley Mountain, an adventure where you’re the leader of a scientist/rock and roll troupe who solve crimes in their time-bending submarine, I shouldn’t have been surprised. And when I realised you’re saving children from a evil witch on top of a mountain, I barely batted an eyelid.

It kicks off with a tutorial-type section to show you the ropes as a member of your group goes off solo to try and rescue the children. It serves as a solid and simple introduction to what’s involved in terms of movement, and the examining, dismantling, combining and ultimately using of the various items that come as part and parcel of this type of adventure. There’s also basic conversation trees when you interact with various inhabitants, and putting all that together in a very specific order, is well, the order of the day. It’s fairly short but does a decent job of setting things up for what’s to come when the game then starts proper. Point-and-click games live and die by their puzzles. Make them too simple and they lose their appeal, becoming obvious orders of clicks to achieve an easily discernible outcome. At the other end of the spectrum, we have where some in the genre fall foul; by being too obscure they devolve the experience into simply rubbing every item against everything in the game world to try and second guess the warped logic on the developer’s minds. The sweet spot is obviously somewhere in the middle, and whilst The Mystery of Woolley Mountain probably falls nearer the simpler side than most, it does still have a level of challenge that will leave you scratching your head from time to time. Often, I could see what it wanted me to do generally, but couldn’t find the most immediate clue or solve the immediate problem readily, creating some healthy tension of me being stumped without ever being truly lost. And normally the answer was an oversight on my part rather than something obscure, so by and large the puzzles here felt like a good balance.

That quality of experience does change depending on which stage of the game you’re at. Loosely the adventure is split into three main sections, with the first two being the most interesting. This is because there are multiple environments to explore, and therefore greater options within the puzzle solving to progress. More options not only mean you can progress multiple puzzles often simultaneously, but gives more scope for the complexity and less obvious nature of the solutions required. However, in between these sections are mini story beats that are much shorter, and the puzzle environments much smaller, meaning most of them are a bit of formality as there are a limited number of items and places to use them. As is familiar with more recent games of the genre, you can highlight interact-able areas in a given screen to hone in on what could be a solution to your next puzzle, and in confined environments, this makes the puzzles fall a bit flat. Unfortunately the third main section is a few of these shorter sequences meaning it never really reaches a gameplay crescendo of any kind and never feels as grand or as well executed as the earlier sections that have larger environments to explore. It doesn’t help that the main villain, the witch, never really feels threatening, nor do you really worrying about the welfare of the children you’re looking to save.This is a bit of variety packed into proceedings with a couple of retro games thrown in, necessary to complete certain puzzles. There’s also riddles, word puzzles and even a very small action section requiring you to dodge an enemy and pick up items which all create a nice contrast, if brief, to the normal adventuring experiences, and does a good job of holding interest.

The characters and plot are where I have very mixed feelings. On paper the cast of your troupe should work as a lovable, quirky group with individual personalities. There’s Science Spice, Alcoholic Spice, Romantic Spice, Robot Spice and Temporary Contract Spice. All led by the main character Garland, who’s the only one who seems to do anything or care that some children are in danger. But none of these individuals are unique enough to really care about, they’re just another person that Garland needs to convince to help (more than once) making them feel like sub-par NPCs in terms of character development. Which is fine but then that means the personality rests with Garland, and he’s alright, certainly a solid moral compass, and a good heart. But his writing isn’t as funny as it thinks it is and the way he pronounces any word beginning with “w” as though there’s an “h” to pronounce as well even if there isn’t grates heavily after the third or so time. In fact the voice acting in general is a bit average, almost to the point of sounding wooden until you get into the swing of that’s just how the characters sound, and sort of roll with it. I also go irritated in a few other areas too, one of which is my particular bugbear of the genre, and that is have completely pointless items, that are superfluous to requirements and serve no purpose. On occasion, you can have amassed a few of these, and you think you’re missing something obvious with them, when really you could have just avoided picking them up in the first place. Larger irritation came when the game bugs out a bit, either by distorting the subtitles, as they move to follow characters, and you realise the shadow of the text has a mind of its own, or there can also be duplication of actions such as the “back” option if you’ve zoomed in on something which can look untidy. But the biggest issue is that the game can crash from time to time in certain situations. Not all the time, but there did seem to be specific actions (like doing things knowingly out of sequence) that caused the game to not have an answer. And whilst you can save your game and there’s an autosave function, the latter didn’t help me most times, so I ended up having to retrace my progress from my last save, which is incredibly frustrating.

The Mystery of Woolley Mountain then feels a little bit untidy, lacking the polish you would expect, and as a result ends up being a fairly average experience in all sense of the word, both good and bad. People looking for a new point and click title will have a reasonable few hours in its puzzles and settings and the sense of pride that comes with overcoming them. But when it’s over, most won’t look back and remember with any great fondness the experience they’ve had or the characters they’ve met. Nothing really stands out, and that’s a shame because you can tell from all the gaming and retro references hidden throughout that there is serious passion from the developers, it’s just that passion hasn’t translated into a really memorable game. Certainly a decent example of the genre, but nothing more.

The Mystery of Woolley Mountain is an average point and click game that loses its spark by the end. A good mix of puzzles is offset by an unengaging plot and characters.

You may also like
nintendo switchThe Mystery of Woolley MountainReviews

Win a Nintendo Switch Console and a copy of Relicta

Monster Hunter Rise Competition: Win a copy of the game with Steelbook and Palamute & Palico keyrings