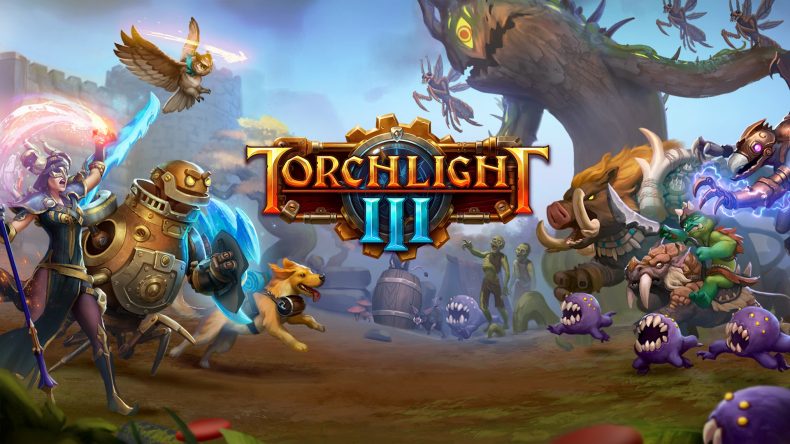 The weight of expectation can be a heavy load to bear, and anyone taking on the duty of producing a new Torchlight game was always going to have their hands full. With Runic games no longer at the helm, the third entry was nonetheless in safe hands, developed by Echtra Games, a studio founded by Max Schaefer, one of the founders of Runic, and composed of developers who worked on the series previous entries as well as the Diablo franchise.

Beginning life as a proposed MMO subtitled Frontiers, Torchlight 3 has seen a rocky development ill-befitting a series of its calibre and popularity. Finally landing in early access on PC a few weeks ago to a somewhat subdued applause, the recent update has added a new area and fixed a lot of perceived issues, but Torchlight 3 is still very much an “early access game”. That said, it’s in better condition than many such titles, and shows more than a hint of promise for the game it will become. Torchlight’s world has always been bright and vibrant, brimming with colour and spectacle to stand out among the legions of dark and dour dungeon crawlers. The third entry is no exception, presenting a beautiful, cartoon world to hack and slash your way through. Level design is par for the course, though, and nothing in the stages really stands out. There’s not really a sense of awe and scale on the level of things we’ve seen before.

Once again you’re thrust into the middle of an ongoing conflict, a brave adventurer stepping into the fray with your trusty pet and array of weird and wonderful skills. In terms of design at least, Echtra have pushed the boat out on a couple of the player characters. One half of the roster is tried and tested: the Dust Mage is your magic-slinger (though I couldn’t use this class because the giant-hand slap default melee attack is too ridiculous for me to get on board with), while the Sharpshooter class returns only with a handful of summoning skills that don’t really make much sense in context. In fact as much as I love the Sharpshooter class in Torchlight 2, here it just feels like an obvious shoe-in, equipped with mostly standard attacks like a rain of arrows and rapid fire mixed in with the ability to summon an army of goblins or a giant ball of rats that just don’t click with the class. On the other hand there’s the Forged, a robotic character class who specialises in melee and crowd control, but who looks like a sidekick or a summonable pet as opposed to a player character, and the Railmaster, who frankly carries the roster by him or herself.

The Railmaster is where it’s at: a class built around dealing heavy damage to large groups while an actual train choo-choos around beside them, eliminating enemies with a variety of turrets. It’s a super cool class design and stands shoulders above everything else in Torchlight 3. Which is kind of the problem here: besides the Railmaster class, almost everything else in Torchlight feels recycled from somewhere else.

From the skills to the gear descriptions, we’ve reached a point in the life cycle of this genre where we’ve seen it all and we want something new. Or at least that’s how it feels. Torchlight 3 is a serviceable and enjoyable adventure, but it doesn’t do anything fresh. With games like The Last Epoch and Path of Exile producing skill trees and character progression with a little innovation, Torchlight 3 feels like it goes the other way a little, with a slightly confusing a convoluted series of skills and ability trees tied to not only your class but also various relics and other elements. If there’s one facet that feels unique to Torchlight 3 it’s the fortress, your own little space to build up and furnish as you see fit, from trade carts and crafting stations to various decorations. It’s a space you can make your own, though perhaps needs more unique items and placement options to really go to town and create something vastly different from other players. The MMO element has been dialled back considerably from the original plans anyway, so you won’t be dipping into each other’s strongholds willy-nilly. It’s now something more like, say, Path of Exile, where you’ll see other players in the hub towns and can choose to team up or go it alone.

It’s still early days for Torchlight 3. Right now it’s a decent dungeon crawler, but even in this heavily saturated market there are still occasional gems, and in its current state Torchlight 3 simply isn’t that. With work done on the skill trees and classes, and the injection of a little spectacle, it could become something great. As it stands though, it’s really just another dungeon crawler.