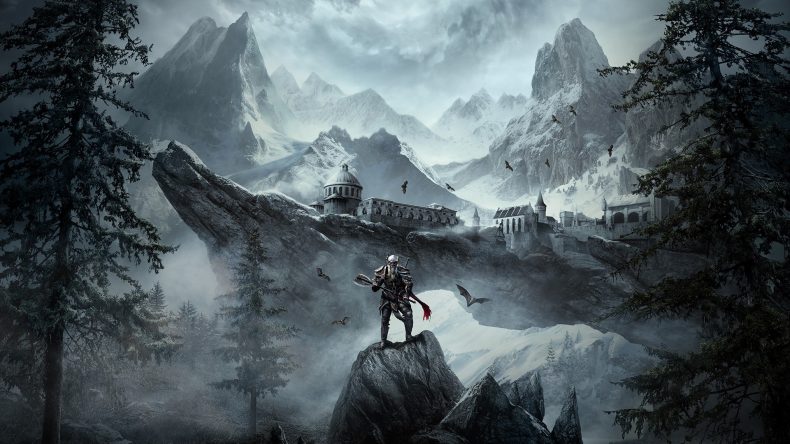 I’ve tried on multiple occasions to get into The Elder Scrolls Online, jumping back on for 5 to 10 hours after the launch of every major expansion since its release, but I’ve always been put off by something, be it the performance of the Xbox One version or the sheer density of the world.

Coming into Greymoor with a brand new character on PC has changed my opinion massively though. For a start, it’s way smoother in every area, and it also helps that Greymoor is set on Skyrim, Tamriel’s frozen north. For many, myself included, the option to finally fully return to that beloved setting is enough to get us fully on board.

It’s set 800 years before Skyrim, so there are no Dragon’s and the leadership is different. The Imperials aren’t enslaving the masses yet, but the harsh countryside is no less deadly, and the landscape itself has barely changed. Indeed, familiar towns remain as they were in Skyrim, which is a bit weird and is likely deliberate. The 800 year difference is a necessity for the story, not for the gameplay itself. Greymoor adds no new classes or races, but does overhaul the Vampire skill tree completely and manages to really make this an avenue worth taking. With strengths and weaknesses rebalanced to make vampires a little less overpowered, it’s now a much more viable option. The new vampire companion, Fennorian, is a handy fella to have around, and he oozes that ice-cold vampire cool we last saw in Serana when we played the Dawnguard expansion for Skyrim.

For newcomers though, TESO is as confusing as it has ever been. Yes it’s great when you’re in the starting area and the way forward is clear, or when you’re out in the world fighting and looting, but the quest system is frankly overwhelming, filling your log with busy work so you’ve upwards of a dozen active quests in the first few hours, some of which require travel to other areas, or access to things you simply don’t have yet. It’s not helped by the fact that a great deal of Greymoor’s story content is chasing leads alongside Lyris Titanborn, the Brienne of Tarth-like warrior seen in the CGI trailer. She’s a great character, and Mass Effect’s inimitable Jennifer Hale does a superb job with her, but it’s still not enough to make constant fast travel thrilling. I can’t imagine what it must be like for high level players to traipse around like this, bashing keys to speed through dialogue and get to the next interesting element.

Which brings us neatly to the Antiquities activity, brand new for Greymoor, which sees you using a special magical device to locate lost treasures via some interesting little excavation minigames and exploratory side quests. It’s an unexpected and unique addition for sure, and gives you something to do once the relatively brief story is over. Harrowstorms are also a new event, though not a particularly new concept, and can be found or avoided relatively easily once they pop up on the map. They work like Fortnite’s eponymous storm, transferring anything in them into violent zombie-like monsters, and are a decent source of XP and loot if you find yourself at a loss for things to do. They do feed into the story, but will persist beyond it for the sake of the grind.

It’s no exaggeration to say that Greymoor’s biggest draw is the return to Skyrim. It’s immediately familiar, oddlly comforting despite its subzero temperatures, and looks as beautiful and frigid as it ever did. Producing a new story about vampires in the north feels a little like fan service (and indeed, Dawnguard is probably one of the highlights of all Elder Scrolls DLC), but it pulls it off.

Newcomers may struggle to find their feet, but my advice is to keep pushing on, focus on one quest at a time, and just enjoy it. Greymoor offers a lot of new content for groups, but it also feels so much like Skyrim that playing alone feels great. The atmosphere is spot on, and even the less interesting quests offer up some beautiful scenery. And let’s be honest, that’s why you’ve come anyway, isn’t it?

The atmosphere is spot on, and even the less interesting quests offer up some beautiful scenery. And let's be honest, that's why you've come anyway, isn't it?