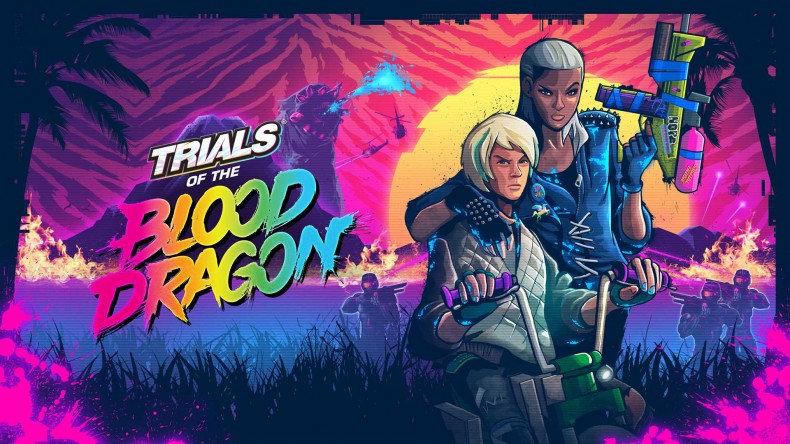 Announced with a surprise “and it’s out now” moment during E3, the idea sounds excellent on paper. Mix up a Trials game with Far Cry’s Blood Dragon spin-off, and sit back and watch the cash and plaudits roll in. Unfortunately, all this title really dies is leave me incredibly concerned for RedLynx.

I’m a fan of the Helsinki based dev, and have been for some time. The Trials games may be an acquired taste, but I find them to be digital crack. Racing games only by aesthetic, these are twitch based challenges that feel more like puzzles – each course having a route you need to suss out then execute to perfection in order to top the leaderboards and, more importantly, give you bragging rights among your friends. Trials of the Blood Dragon takes that formula and throws it out of the window, and I’m worried.

Since becoming an Ubisoft Studio, RedLynx have put out a mobile game that felt quite anti-consumer, a fully fledged console game in Trials Fusion which, while excellent, didn’t launch feature complete, then a crazy bit of DLC called “Awesome Level Max” which was okay but very short lived, and now this, another game that not only dilutes the “Trials” name further, but makes me wonder what the hell is going on. More Blood Dragon than Trials, lots of the courses will see you on foot with some terrible platforming. It’s floaty, inaccurate, and over-used. In some courses there are sections where you have to shoot and clear your way of bad guys with an Uzi, and while it sounds fun and silly, these sections show a complete contempt for that core Trials ideal: speed running. It’s so imprecise and awkward that the leaderboards will be more luck than skill, and these levels feel as though they are fan-made in the Trials editor (they probably are made that way, in truth), which isn’t to say they’re inherently bad, because it’s this new platforming gameplay that ruins them. Of course, when you’re back on the bike, it’s Trials – and Trials is ace. But having to jump off the bike for a mid-course platform section is just bad.

It’s a shame, and it’s confused. At first, I pondered if this was an idea to get new fans of Trials involved, because they like Far Cry, or Blood Dragon. But no, that makes no sense, because this isn’t just a bad Trials game, it’s a game that doesn’t give any indication of what Trials usually is. It looks nice at times, and there’s a set of levels that pay homage to Hotline Miami 2 (which is always welcome), but there’s also a combination of visual effects that feels over the top – part old VHS, part glitchy future-tech. But just as you’re warming to it, there’s more platforming, then a level that will make some people sick thanks to the spinning motion.

The soundtrack is good, though, and there are funny moments for those of a certain generation, even if it’s a little bit all over the place. Will Smith’s “my shit always works, sometimes!” line is trotted out, and the opening joke that sees Rex Colt introducing the story as you race through the course only to say “That man on the bike? That’s not me, I’m dead” certainly raised a smile.

I don’t know what Trials of the Blood Dragon set out to achieve, but it’s disappointing. It’s not completely terrible, and there’s fun to be had with the core Trials biking stuff, though it’s buried in among the Blood Dragon humour and bad platforming, but all it has actually managed to do is dilute the name of an excellent series further, and leave me worried as to what RedLynx does next. This feels like a very capable studio being told to annualise a series that really didn’t need to be yearly.

This feels like a very capable studio being told to annualise a series that really didn't need to be yearly, because it bypasses everything that makes Trials great.