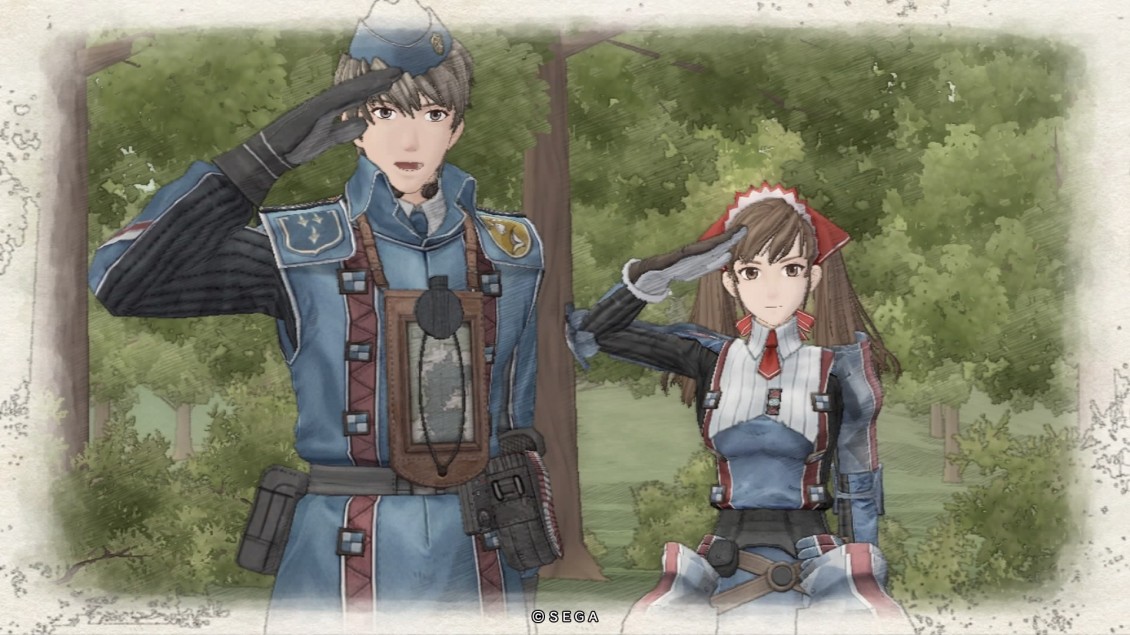 Valkyria Chronicles is a gem of a game. It has been almost a decade since it was released on PlayStation 3, and this remastered version comes with full trophy support and all the DLC included.

The story is what you’d get if you took a World War II setting and added a bit of anime and fantasy to it. There are characters on both sides that you will grow to love or despise and in the end the main characters are all memorable. There will be death, betrayal, emotion, and more as you experience one of the most riveting tales in RPG history all told through a fictional book, which is an indicator of how much of a focal point the story is here.

A small nation known as Gallia is trying to avoid the huge war taking place between the Europan Imperial Alliance and the Atlantic Federation. Gallia unfortunately gets involved because of its rich supply of Ragnite. Welkin Gunther is the son of a hero of the first War. The main story revolves around him as he gets drafted and commands Squad 7. Each member has great development throughout the epic tale and there’s no way you won’t end up getting attached to the core of Squad 7 by the end of Valkyria Chronicles. Even the main antagonists have a human side to them that is seen throughout, and there’s no way you won’t get attached to one particular villain here. Valkyria manages to do one thing really well when it comes to the plot: it shows the human side of war. I haven’t felt this way about a game revolving around conflict since I played Valiant Hearts. You get to see how much mental and physical trauma is involved during war and how far some are willing to go to achieve victory. It is also interesting to see how the theme of racism has been handled and how barriers are broken as squad members get attached. Death is very dramatic and the fantastic score by Hitoshi Sakamoto is a perfect companion to themes here.

Apart from the story, you will spend a lot of time in combat scenarios. One of the things that made people love Valkyria Chronicles so much is the combination of the best of three different genres for combat and gameplay. There’s elements of third person shooters, RPGs, and tactical strategy games here all intertwined wonderfully into a tasty package. Each combat scenario has a primary objective and is followed by you selecting troops before initiating the real battle.

After selecting your unit on the overhead map, it consumes 1 CP and animates wonderfully from a 2D overhead map into a 3D battlefield right into the selected unit. Now you control the unit and while you move, the action gauge at the bottom is consumed. One thing I didn’t expect is enemy units fire at you as you move. It took a while to get used to this as I’m more of a turn based combat person. Pressing R1 will let you aim and fire. It is worth noting that positioning the mark on an enemy doesn’t guarantee accuracy. You move on to another unit after ending that turn and the developers have provisioned for not letting you overuse some units because you do get the option to keep consuming CP with the same unit. After all your CP are consumed, the phase ends and the enemy phase begins. This is one of the few problems I had with Valkyria Chronicles. I wish there was a way to speed up enemy turns. When I play Fire Emblem on 3DS, I disable almost every animation to save time or fast forward when I can. Sitting through long enemy turns later on when they have a lot of CP to consume is painful. The RPG element is in the classes and the levelling up system. There are five unit types: Scouts, Lancers, Engineers, Shocktroopers, and Snipers. Each of these has its own pros and cons and you need to select units from each classes based on the map and objectives. You also get to control a tank that consumes twice the CP. Controlling a tank is amazing in motion and I enjoyed it a fair bit after getting the hang of the controls. While most other strategy games have individual units leveling up, Valkyria has you level up the entire class. This makes the leveling system more accessible as you don’t need to worry about some units getting left behind.

One of the most striking aspects of Valkyria Chronicles is the visual style. There’s a combination of pencil sketch animation and water colour painting that gives it a unique identity. Characters look great and everything looks fantastic in motion. There are a lot of jaw dropping moments when it comes to the visuals during combat, including some wonderful onomatopoeic sound bubbles. My only complaint with the visuals is some low resolution interface elements in menus. On the audio side of things, Hitoshi Sakamoto nailed the soundtrack. It is full of memorable tunes and appropriate atmospheric music during cutscenes. The heavy use of piano is great and fits perfectly with the visual style in Valkyria Chronicles for me. I enjoyed the English voice acting for almost all the characters a fair bit. Before some of you raise your pitchforks, there’s dual audio support for voices.

As a re-up, this does almost everything right. It runs at 1080p and 60fps barring cutscenes, and barring the small visual annoyance mentioned above, everything is great. I wish they had taken care of the difficulty spikes though. Valkyria Chronicles Remastered is an essential game on the PS4. It ticks almost every checkbox and will have you thinking about it and the characters long after completing the 30+ hour story. It’s well worth checking out.

A great remaster of a timeless classic RPG that must be experienced by anyone looking for a great combat system and memorable characters.