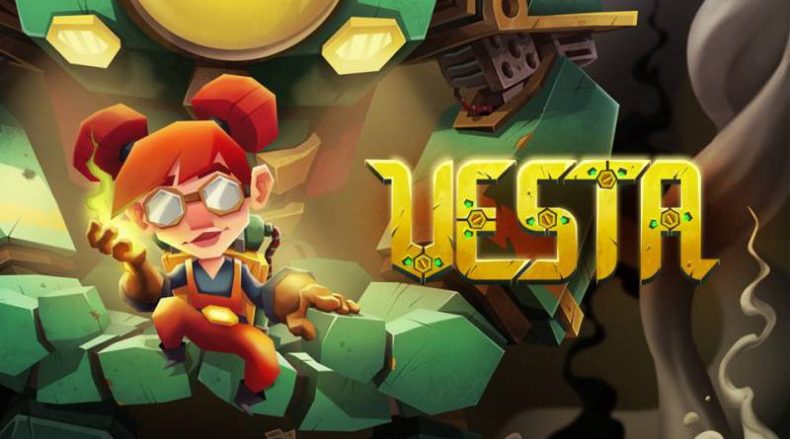 Vesta is one of those games that, at any given moment, feels as though you’re playing something else. It’s a mish-mash of well-worn parts that never really comes into its own, never really stands up and says, “This is who I am and this is why I’m different.”

An isometric puzzle-platform game, Vesta follows the adventures of the titular, red-haired teeny-bopper 6-year-old as she attempts to navigate an abandoned facility that has fallen to the control of its robotic products. Attempting to reach the mainframe of an AI program called “Mum” on the topmost level, Vesta is armed with the ability to siphon energy from nodes in order to power other nodes, the application of which makes up the lion’s share of the puzzles.

At all times you must be aware of how many energy charges you have available, and attempt to make clever use of them to open doors, power lifts or platforms, and activate conveyor belts and force fields. To exit each level you’ll need to juggle charges on various devices while looping the area and opening shortcuts, so that when you reach the final door you’ve somehow managed to arrive with the required amount of energy. Vesta is joined by a robot named DROID, programmed to prevent harm coming to her in accordance with the Three Laws rule. Switching between the two of them with X allows you to pick Vesta up and throw her across gaps, shield her from danger, and fire a stun cannon that frazzles enemies so Vesta can extract their energy. From stationary guns to spider cannons, to big mechs that poop out bombs for no reason, there’s a hodge-podge of standard issue robot baddies who never become a challenge until the sporadic boss fights.

The robot is pretty handy for moving blocks to create walkways through the moats of acid that inexplicably litter most areas, or for defending squishy little Vesta. Sadly though, moving it around is a chore as it’s just so cumbersome to control. Oddly, Vesta isn’t much better, and I found it quite easy to misjudge the angle of a jump or how close I was to an enemy’s patrol route. I died a lot in the early part of Vesta, partly because I misconstrued what type of game it was and partly because it feels so cumbersome and unfriendly. It’s pretty enough at face value, but the textures are very simple and the animations are limited. It does absolutely nothing to wow you, and both the graphics and sound are little more than functional for purpose.

Vesta’s biggest issue is that it’s just a game. It’s not bad, by any means, but it’s so average that it’s difficult to recommend. It’s not a particularly steep challenge, it’s not dazzlingly pretty, it’s not that funny and, unfortunately, it’s just not original in any way.

If you want a game to idle away a few hours in handheld mode, it’s a decent shout, but there are better and more interesting titles available for the Switch.

Vesta is best described as okay, and it never really rises above that level despite its prettiness

VESTA and The Coma: Recut are getting limited edition PS4 releases from eastasiasoft