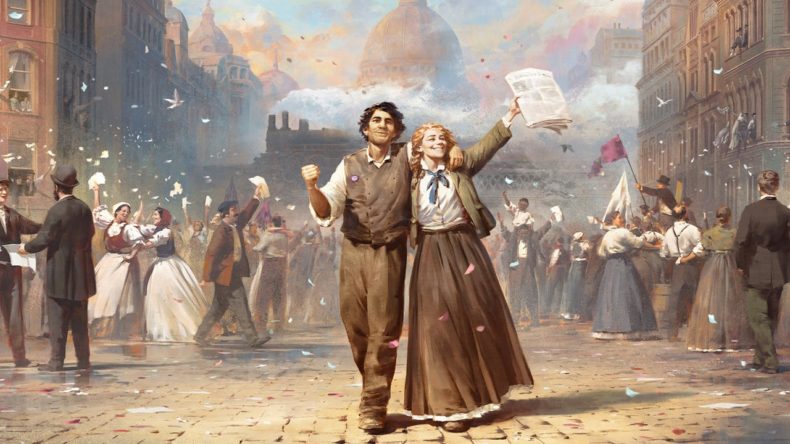 At the risk of sounding like an uneducated pleb, Victoria 3 is a seriously complex game. Existing fans of the series will be nodding right now like a parent whose child has just told them the sky is blue and stinging nettles hurt, but as a newcomer to this particular franchise I was genuinely surprised by just how deep the rabbit hole goes. Not to mention how many rabbit holes there are.

Paradox are counted among the very best creators and publishers of civilisation sims. If it carries their name, either for development or distribution, you can almost guarantee a degree of quality and attention to detail rarely matched by any but the genre-leaders. I’ve always entered their universes with a certain amount of trepidation and come out feeling oddly smarter than when I went in, whether a new universe like Stellaris or an established franchise like Crusader Kings.

But Victoria 3 had me stumped right from the start and took me hours to even begin to understand. This is not grand strategy in the vein of other titles like Age of Wonders: Planetfall or even Crusader Kings III; Victoria 3 is about running a nation, governing every aspect of it from taxation to market prices, import and export of goods, trade deals, infrastructure and government decrees. 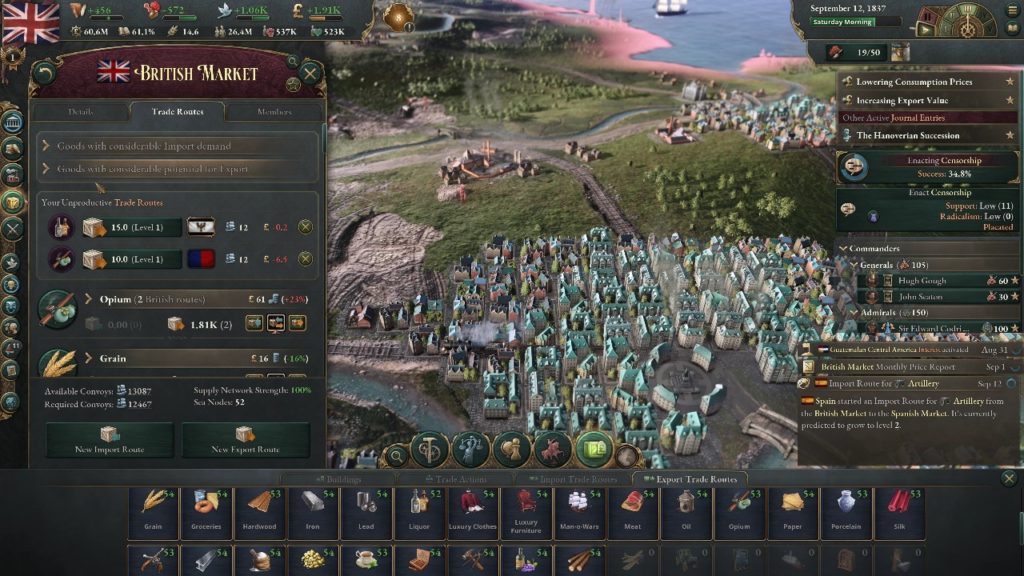 While there is an element of warfare continued from and built upon since Victoria 2, the focus is not on conquest. You won’t be establishing military dominance and wiping out your opposing nations; you won’t be racing to reach the moon first or develop weapons of mass destruction. In fact there are many more ways to fail Victoria 3 than there are to “win” it, and setting out your own personal goals is an important aspect of how you go about succeeding.

You may want to build a global trading empire, a powerful hegemony, or develop a monopoly on sought-after goods. Maybe you do want to exert military pressure on an upstart nation, or perhaps you just want to be left alone to quietly develop a market of your own. No matter what, you’ll be forced to split your focus across multiple aspects of government. People will look to you for everything from employment to road maintenance; you’ll be called upon to develop railways, install new military commanders, and reform failing governments.

Make no mistake, this is rarely a thrilling game. You might choose to create a new steel mill and have to wait 76 in-game weeks for it to be complete. Sometimes you’ll be losing money or standing and won’t have a clue why. There are three currencies by which you measure success. Bureaucracy, Authority, and Influence. Managing these is crucial to success; keeping each one in the green will be your primary focus. Bureaucracy is maintained and spent by installing systems of government and decrees; Authority is the currency that affects the passing and execution of law; and Influence is the measure of your overall effect on your pops. 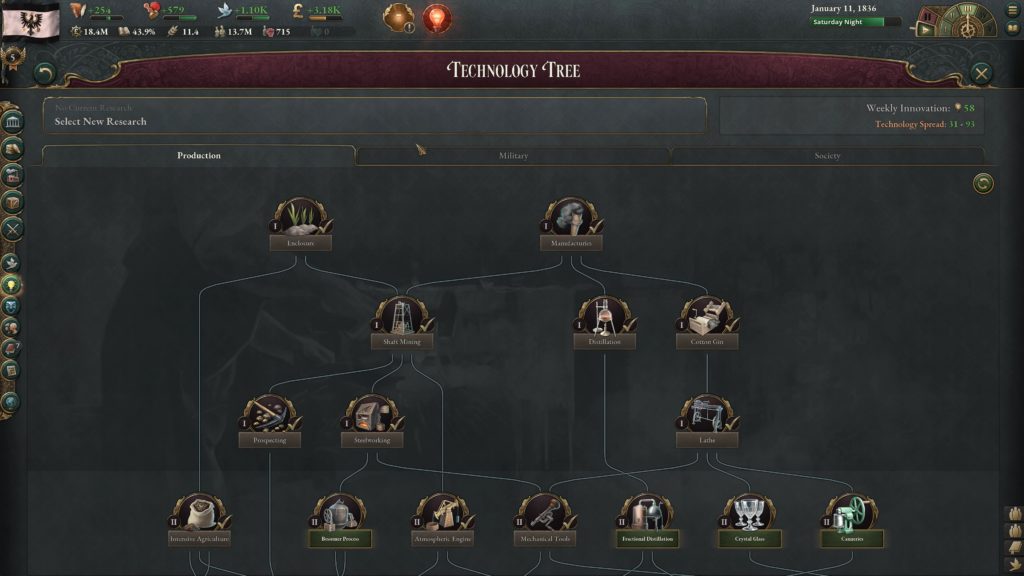 Victoria 3 is a game about creating loops of supply and demand, using your pops (populations) to run factories, universities, farms, and mills to generate goods and services that you can then export. At the same time, you’ll need to keep production goods coming in, either through manufacturing elsewhere or importing them from another nation. At the same time, you’ll need to research new technologies to remain competetive on the global stage.

Throughout the game, elements will pop up that force you to change your thinking and adapt. A well-liked politician could die, and their replacement upset the status quo. Global demand for a given item could skyrocket or plummet; war could break out between two of your allies, forcing you to pick a side that will have multiple unseen ramifications. It means every single playthrough, no matter you’re starting nation, is dynamic and surprising if not exactly nail-biting.

Where I really struggled was in understanding the myriad processes required to keep a nation ticking. The three primary resources are far more complex than simply mining for gold or iron in other 4X games, while keeping people employed and happy en masse is much harder than simply pumping out more units to chop trees or till the fields. 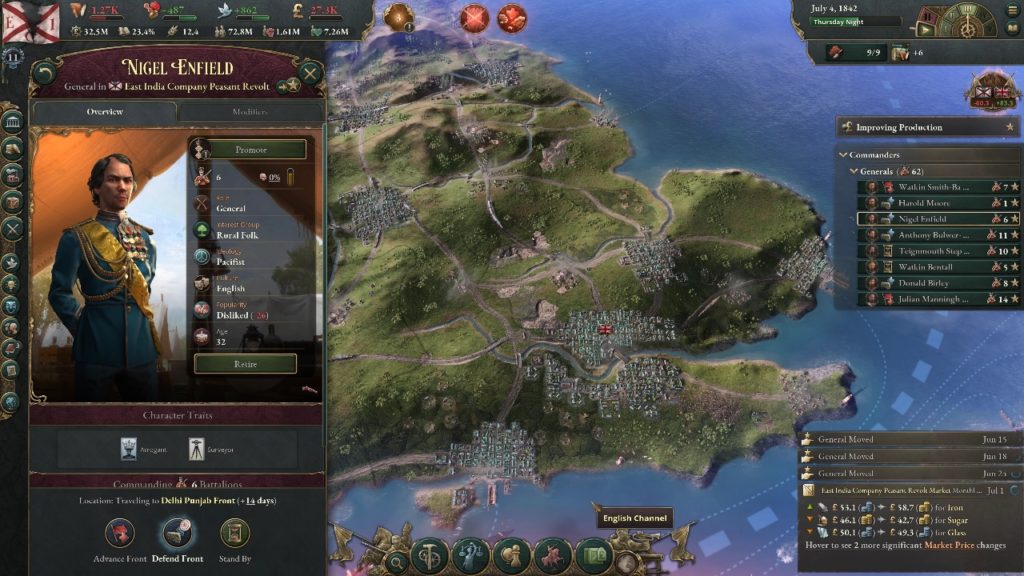 There are several comprehensive tutorial modes that will guide you through the main campaign goals, but each one is a deluge of mechanics, tooltips, menus, and sub-menus. Mousing over one highlighted word will open a new tooltip, which itself might contain half a dozen more buzzwords. You don’t need to understand everything all at once, of course, but I couldn’t help but feel completely overwhelmed for the first few hours.

After a while, though, I did begin to understand. Players with experience of the franchise will find this all much less daunting and easier to understand, I’m sure. But going in uninitiated will be a baptism of fire even for fans of Grand Strategy. Victoria 3 is so different from most other offerings in terms of how laidback-yet-deep it all is.

The first time I raised my Gross Domestic Product to the desired level, or had several weeks in a row where unemployment reduced and my markets soared, I felt genuinely excited. The fact that I lost everything a few minutes later by backing the wrong side in a war over trade routes didn’t diminish my achievements either. I clicked off the Game Over screen with a newfound appreciation for the intricacies of the game, picked a different nation, and started all over again. You never feel like you’re starting with nothing; each nation is already established when you begin, so you don’t ever feel like you’re being knocked back to square one. 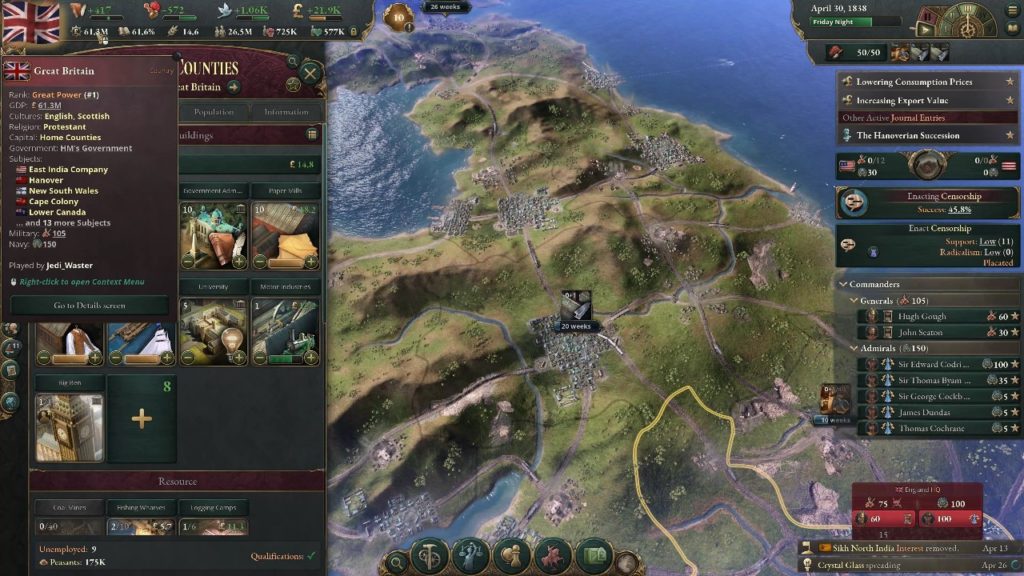 Being set in the 1800s across multiple nations – many of them fledgling – Victoria 3 was unable to avoid featuring certain elements we all wish weren’t a part of our collective history. The slave trade, for example, is something that pops up here and there as part of a nation’s development. It’s a largely unavoidable part of history, but Victoria 3 never dwells on it or glorifies it, handling it more as a cold fact than any kind of gameplay mechanic.

Aesthetically, Victoria 3 is often a beautiful game. You can zoom right into each city and settlement, track your camera across hills, lakes and mountainsides, watch tiny gulls wheel and dive above the sea or follow chugging steam trains from town to town. You can’t get right down to street level, but there’s enough detail to raise a smile. That said, besides specific landmarks like Big Ben, most cities look very similar across their respective continents.

You’re able to zoom right out to a global view and zoom back in anywhere in the world in real time with zero loading, or observe the atlas at different levels to help you govern and monitor. It’s all incredibly in-depth and those who crave this kind of micromanagement will lose days of their lives to the plethora of systems and mechanics. 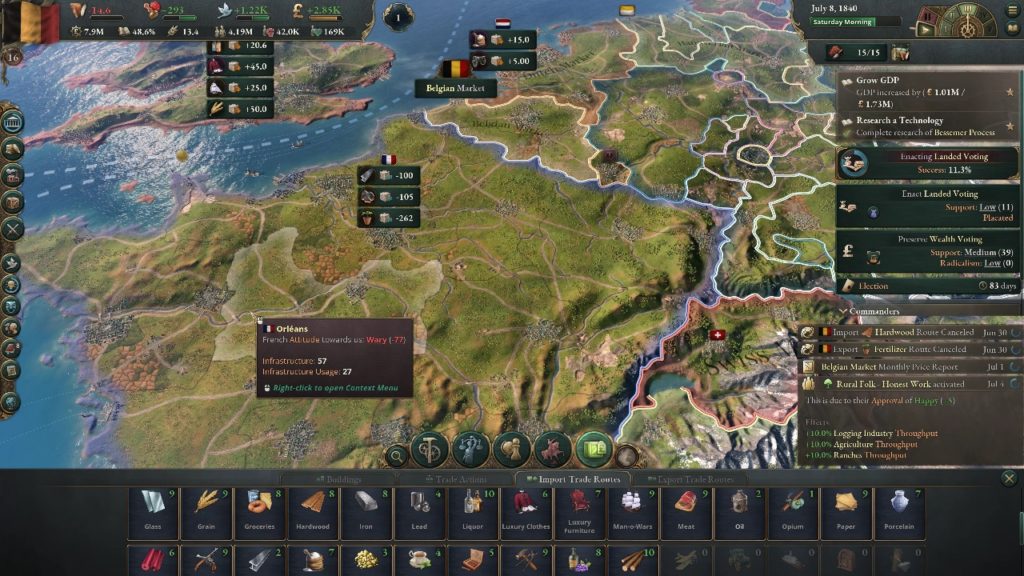 In many ways, Victoria 3 is one for the fans. It might pull in new players due to how pretty it looks and Paradox Interactive’s track record of exceptional strategy games, but those fresh to the franchise are advised to take it slow and learn by doing. This is not a game for rushing headlong into it or brute forcing your way through like I did at first: you’ll get further by allowing yourself to make mistakes and learn from them.

Victoria 3 is an incredibly detailed strategy game that’s as laborious as it is rewarding. You’ll need to put in the work and be prepared to spend a lot of time busying yourself while waiting for things to complete. You can speed it up, of course, but doing so accelerates the rate at which conflict can break out and your economy can crash. Fans will eat this up, but newcomers may struggle to find a comfortable pace. Either way, there’s no denying the effort Paradox have put into this game, nor the overall quality of what’s on offer.

Victoria 3 is an incredibly detailed strategy game that’s as laborious as it is rewarding. You’ll need to put in the work and be prepared to spend a lot of time busying yourself while waiting for things to complete.