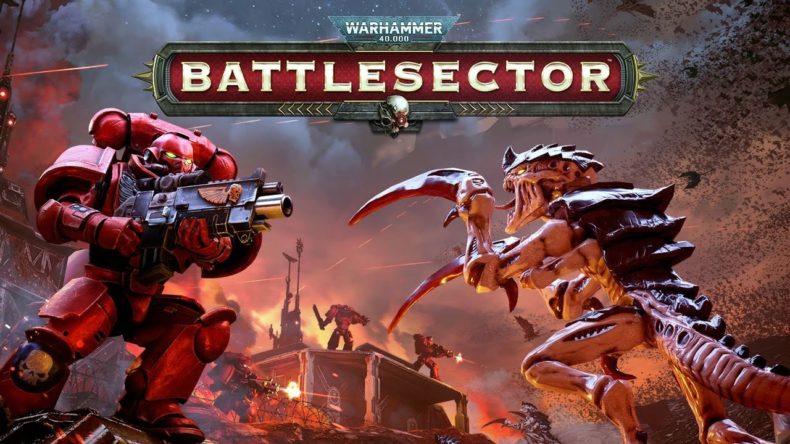 Having played a spate of wildly different Warhammer 40K games recently, it’s almost comforting to play something like Warhammer 40,000: Battlesector. I say “wildly different” but I mean, they’re all hyper-violent gun games ultimately. There’s no Warhammer 40K dating sim yet. Though don’t give them ideas; it could happen.

Battlesector is a return to the franchise roots, sort of. A turn-based tactical squad shooter, it’s a little closer to the spirit of the brand than Inquisitor: Martyr or Necromunda: Hired Gun. It’s a game of skirmish warfare across varied terrain, with a suite of tactics and rules that simplify the overall Warhammer experience while still offering enough head-scratching to make you feel you’re in control.

One thing that attracted me to Battlesector is its focus on the Blood Angels Chapter. Usual posterboys, the Ultramarine, are nowhere to be seen, instead focusing on the bloodthirsty black sheep of the Emperor’s children. It also brings in the Adeptus Sororitas later in the campaign, who are among my favourite more recent additions to the universe. 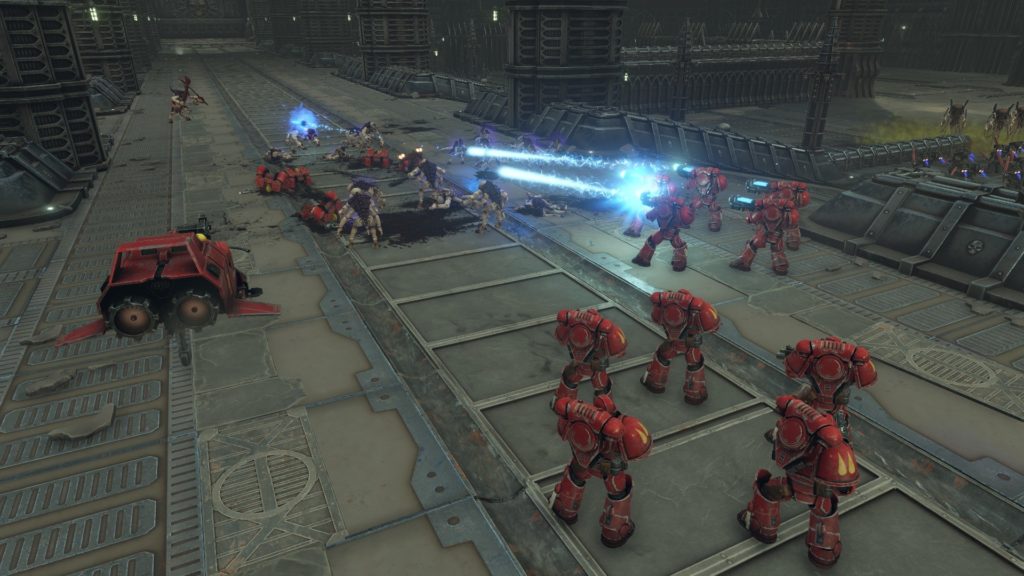 The primary campaign of Warhammer 40,000: Battlesector takes place across a series of oddly familiar hellscapes. War-blasted ruins and desolate red deserts are the order of the day. You control squads of Primaris marines to battle against an encroaching Tyranid threat, and in the multiplayer can opt to control the stabby nasties themselves.

There’s a valiant attempt at a plot to tie it all together, dealing with the introduction of a new caste of Space Marines who are ostensibly stronger than the usual Intercessors but who are also comparatively green. There’s a lot talk about the Blood Angels’ Red Thirst and Chaos Gates, but it’s difficult to feel invested in a story. Your marines are all faceless, nameless, factory built drones. You can’t customise them, level them up or even promote individual squads. I found myself zoning out between deployments, despite the knowingly ironic grimdark poetry spouted by various sixty-a-day-voiced hard-nuts.

Gameplay is all turn-based on the ground, allowing you to position, dig in, or flank the enemy. Momentum Points build each turn, until you have enough (100) to either launch a special attack or bolster an existing one. Marines earn MP by feeding their bloodlust, so they’ll earn more by being closer to the enemy. The Tyranid, on the other hand, earn theirs by being close to a Synaptic leader that buffs them psychically. Newly introduced as DLC are the Necrons, a race of immortal machines who have awoken after 60 million years of sleep with something of a nark on. They gain Momentum Points from being on the move and harrying the enemy. In terms of sound effects they’re not wildly different from the Marines, and they favour the familiar mix of ranged and melee troops that keeps all the factions somewhat balanced. 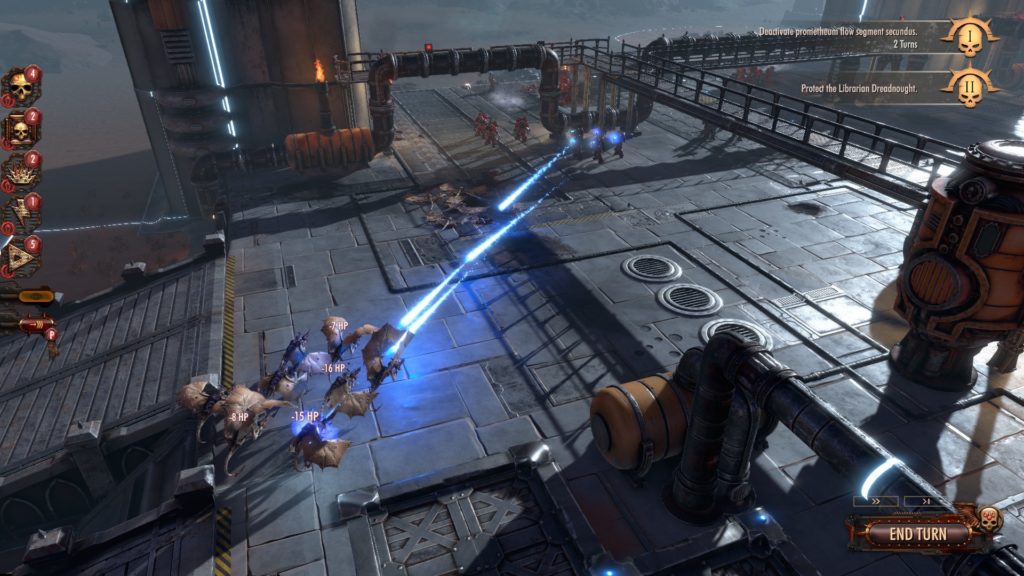 There are numerous unit types in Warhammer 40,000: Battlesector, from marines equipped with bolters, flamers, or chainswords to the alien Tyranid and their bone scythes, or the Necrons dripping green plasma across the battlefireld. Some marines have jetpacks, and you can deploy Baal Predator tanks and Dreadnoughts for devastating damage. A loose rock-paper-scissors mechanic underpins the action, with certain attacks doing more damage to specific types of shielding. Switching over to the alien in multiplayer or skirmish mode delivers the same experience, in terms of the broader strokes. However the Tyranid are generally more close-quarter fighters, and their tactics revolve around overwhelming with numbers.

Skirmish mode has some great options and enables you to build whatever kind of encounter you feel like. There are 8 maps to choose from, and 3 modes – you can choose army size, turn count and whether each army fields special units. It can be played against AI or human opponents, and you can choose either of the three factions. The biggest addition in the DLC update, though, is Planetary Supremacy Mode. It’s similar to the standard Skirmish mode, but sees you claiming territory by winning skirmishes. The objective is to eradicate the opposition on each world and claim it as your own. 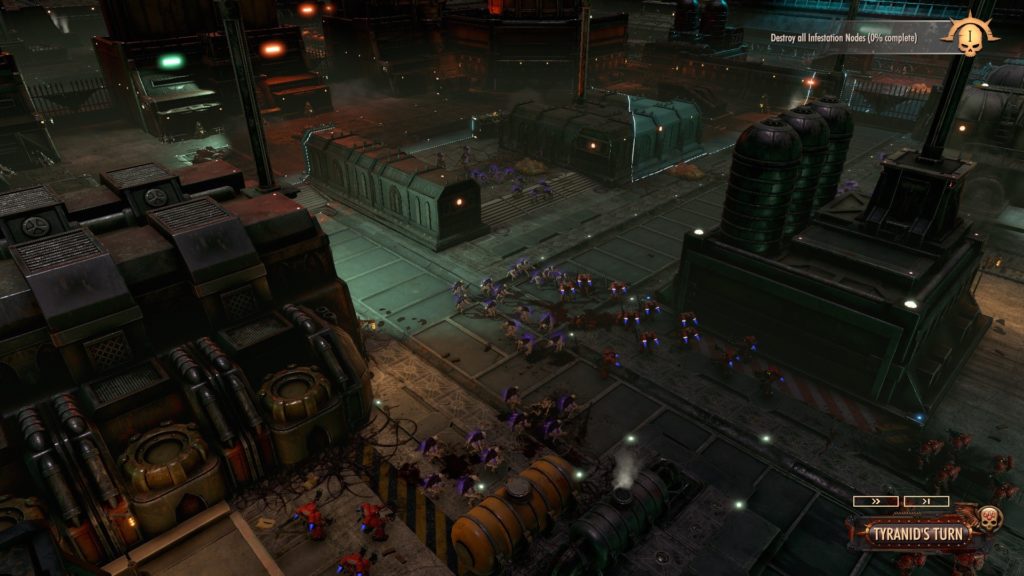 Jumping into a game as Necrons, I went up against the Adeptus Sororitas as a faction of their own. Hopefully they’ll be a selectable faction at some point in the future. Why they’re not is anyone’s guess as they function as a standalone army in the tabletop game. That being said, there’s enough here to get stuck into. A little more customisation wouldn’t go amiss though. In particular, Skirmish mode simply hands you complete armies. While it’s nice to be able to jump straight in, there’s none of the sense of achievement from unlocking units and building your own force to match against other players – which is the essence of Warhammer 40K.

The addition of the Necrons DLC does fatten the offering somewhat though. There’s a great spread of tactics, strategies and units to play with, and enough difficulty options to ensure it’s accessible to all skill levels. If anything, it could use more variety in terms of locations, but then this universe isn’t known for its beauty. One laser-burned cathedral is the same as any other, I suppose.

If you can make sense of the plot – or if it simply doesn’t interest you either way – then there’s a lot of fun to be had in all three primary modes, whether you’re alone or against other players. It’s a meaty campaign with a lot of content to blast through, and manages to live up to the grimdark promise of the Warhammer 40K universe.

Story isn't great
Not enough customisation
Does nothing original

Warhammer 40,000: Battledsector has a meaty campaign to blast through, and lives up to the grimdark promise of its universe.