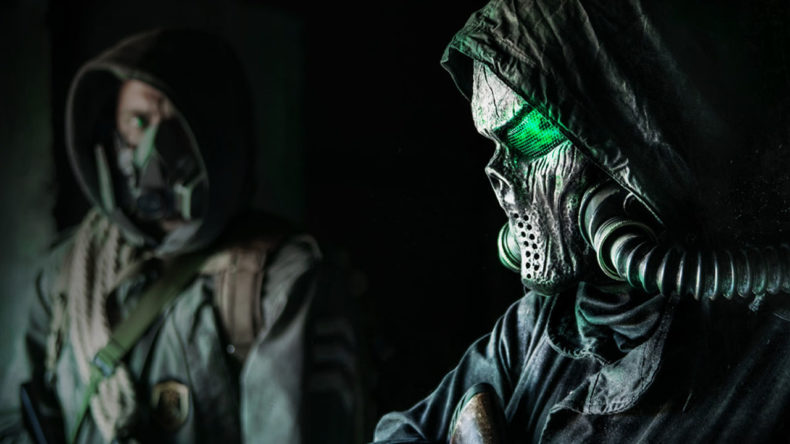 Chernobylite is a first person survival horror from Get Even devs The Farm 51, that first hit early access in 2019. Having reviewed the full release on PC last year, I was quite happy to jump into it again in console. It’s a game built on atmosphere and intrigue, with a great balance of stealth and survival.

You play Igor, a former technician returning to the site of the legendary meltdown to look for his missing wife, Tatyana. As motivations go, it’s compelling enough if a little rote. A protagonist haunted by a dead or missing spouse rarely feels original, but as the central mystery of Chernobylite it works well enough.

The title refers to the solidified crystals of radiation Igor uses to power his bizarre inventions. This is a Chernobyl story that once again romanticises the hazardous zone in modern-day Ukraine, inventing mutated monsters and otherworldly apparatus to add to the sci-fi atmosphere. But it’s an undeniably welcome element of fantasy. It feels somewhat unnerving to be playing a game set predominantly in Ukrainian ruins while the country itself is ravaged by a very real war. This is pure sci-fi though, as Igor uses a teleport gun to hop in and out of missions and fends off extrasensory projections in the undergrowth. 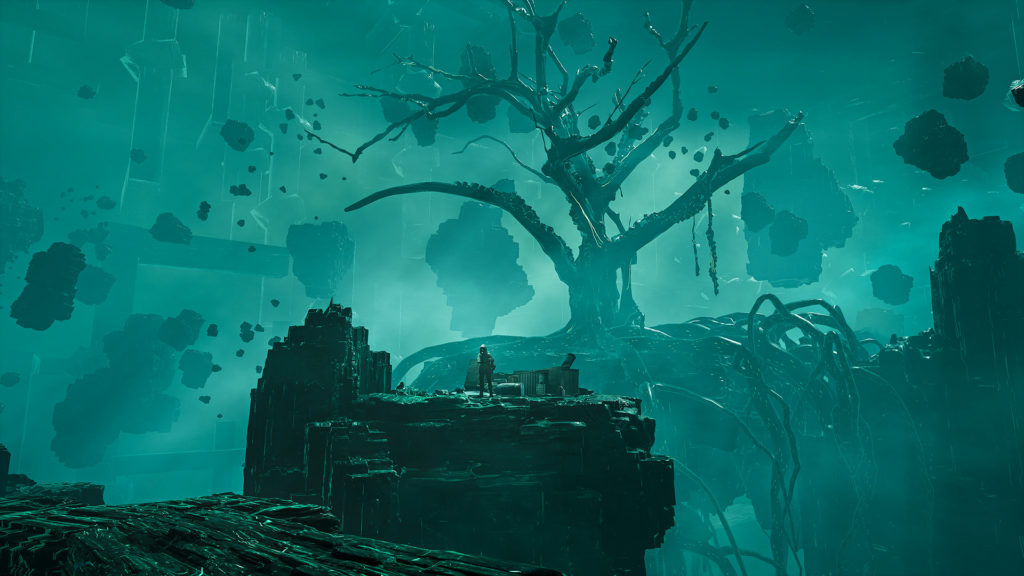 Initially entering Chernobyl with two soldiers, Igor soon finds himself stranded with one of them and attempting to execute a heist to steal a sizeable amount of vital Chernobylite. Set up in an old abandoned factory, you will need to gather materials to build up your base. From crafting stations to sleeping quarters, alchemical labs, workbenches and botanical gardens to grow supplies, you’ll have to craft everything you need to survive.

Four more NPCs will eventually join your group (although you can miss them), forming a ragtag group of survivors. Each possesses a particular set of skills to help in the heist, from a Sniper to a Hacker, but how you treat them and act in front of them will determine whether they stick around until the climactic heist.

Each morning you’ll send your NPCs out on missions and you’ll head off yourself, too. Foraging supplies such as food, medicine and ammunition are the priority. But you’ll also be looking for Chernobylite and clues as to Tatyana’s location and the identity of the mysterious black-garbed stalker who hunts you. Failing these missions has a detrimental affect on morale, as does running low on food and ammo. 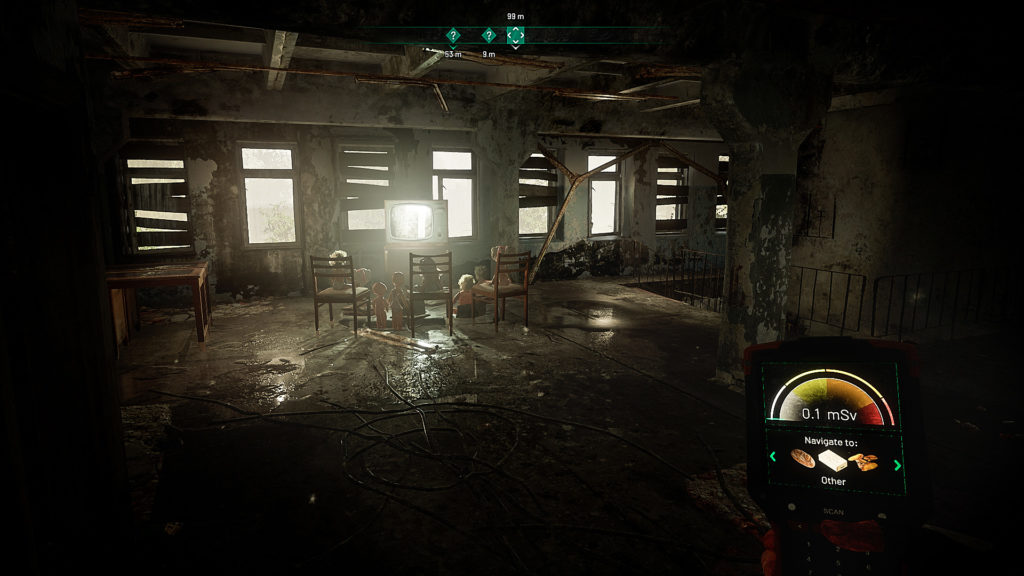 But your decision also have weight. Sparing or killing the wrong NPCs, choosing the wrong answers in dialogue, or sending the wrong team members on certain missions can result in loss of sanity, health, morale, or even life. Later in the game you’ll unlock the ability to reset some, though not all, of your decisions, but it’s often impossible to know what issues could arise from certain choices. One direct side effect is the loss of certain skills. You level up by spending skill points with your group members, and if one leaves or dies, you’ll lose access to their knowledge.

It also helps that they’re a well-written bunch. I said in my original review that the dialogue is better if you leave it in Russian and use English subtitles and it’s true. The English VO just isn’t as good, and actually takes away some of the authenticity of the dialogue. Chernobylite is a game built on its atmosphere, in more ways than one. For instance, it’s simply not scary. It very much wants to be, but the “horror” element is so clichéd that it’s hard to take it seriously. Whispered voices, flashes of unidentified monsters, fleeting ghosts – all these things have been done to death in horror games, and Chernobylite is at its best when this stuff is absent.

CHECK IT OUT: How Salt & Sacrifice is bringing the 2D Soulslike up to date

There’s enough suspense to be had picking through abandoned buildings as mercenary soldiers patrol outside. There’s desperation in finding a cooking station to craft a healing salve when you’re on your last legs, or trading the last of your precious medicine with an NPC stalker for a few rounds of pistol ammo to finish a vital mission. The world itself is a lifeless one – there’s no wildlife to be seen – but it feels dangerous and unknown. Once it starts throwing monsters at you and you realise you can take them out as easily as the enemy soldiers, they lose all sense of credible threat. 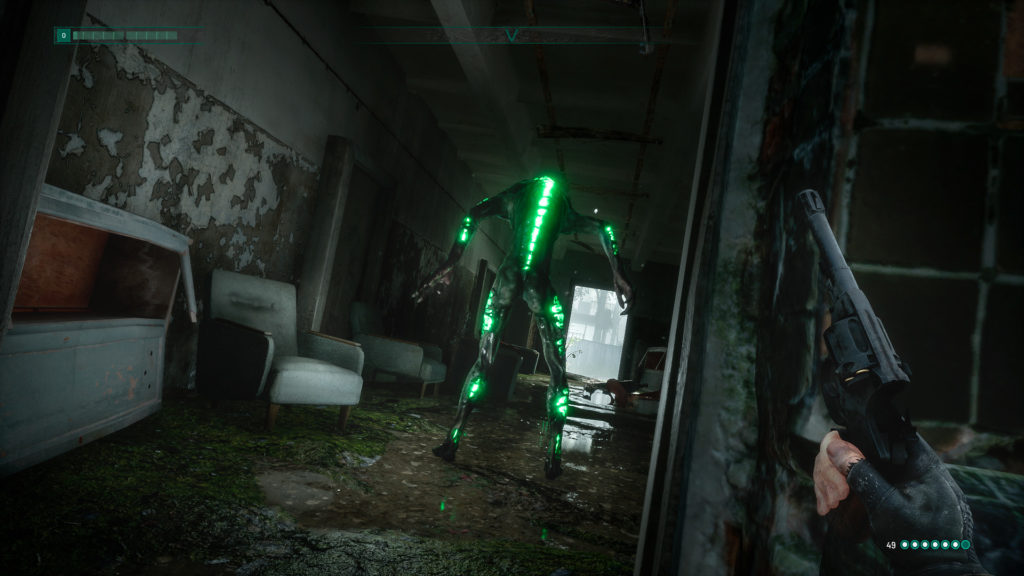 The move onto PS5 has been kind, though. The sun-dappled forests and creaky old abandoned buildings look great, with some superb ray-tracing in places. Creeping through ruins drenched in light shining through stained glass windows is always impressive, and the forest itself feels real. The Farm 51 spent a lot of time scanning the real countryside to recreate an authentic copy.

Sadly, the shooting is no better on pad than it was with mouse and keyboard, though. Igor is no professional soldier and it shows. Gunplay feels sluggish and imprecise, and you’ll be better served avoiding conflict or going for stealth over direct gun battles. You’re also pretty squishy, and damage will have long-term negative effects.

Chernobylite excels better as a survival sim, and introduces enough new ideas to feel like a fresh entry in the genre. It’s interesting to build up the base, form a group of plucky fighters and learn new skills from your allies. I’ve always enjoyed games that make you prepare for every mission, choosing what to slot into a limited inventory and then struggling to decide what to bring back and what to leave behind. In these moments Chernobylite does the tension of survival better than most, but the hokey horror element lets it down.

World is a little lifeless
Shooting is unsatisfying
Not very scary

Chernobylite does the tension of survival better than most, but the hokey horror element lets it down.