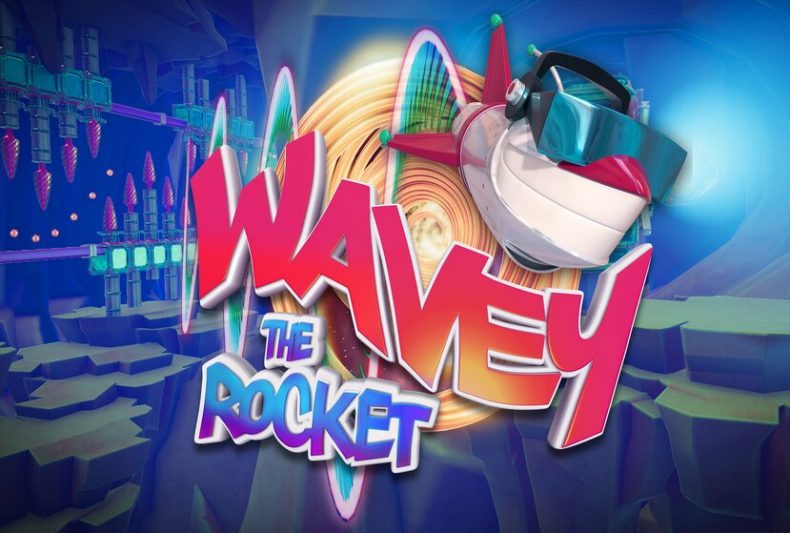 Video games are a funny medium sometimes. They throw up situations that would sound ridiculously out of place elsewhere. Where else would I be able to control an anthropomorphised rocket who can only move on a sinusoidal wave curve to navigate dubiously laid out obstructions? And all this because a moon asked him to go and secure some quality fizzy pop from an evil corporation. It’s a completely bonkers situation and perfectly encompasses what’s both good and bad with Wavey The Rocket.

The control scheme is the main point of difference to other side-scrolling action arcade titles. Your movement is pre-programmed to follow a continuous smooth oscillation, denoted by an orange wave flowing ahead of you. The trick is to alter the height and frequency of the peaks to have more control over where Wavey moves. There are two control schemes, either a mouse or a gamepad to choose from. Both work well and are responsive to your movements, so it comes down to your personal preference when playing. The reason why it’s important to manipulate the movement of Wavey is because each level will be littered with objects and obstructions creating a tricky gauntlet you’ll have to navigate through. Whilst you can cope with a slight scrape on an obstruction, any real sort of contact will result in you blowing up and having to start at the beginning of the level or one of several checkpoints. Therefore understanding how to successfully manipulate Wavey’s course, often at short notice will be critical to your success.

Each level is littered with trails of collectible coins, often showing you the recommended wave oscillation for that section. And most courses have been designed with a sense of flow, requiring certain manipulations to get through them in one flowing movement. Collecting coins serves another purpose though, as they indicate your score at the end of a level, as does the time it takes to complete, and the number of deaths on route also. There are also three special gems to collect in each level – think Star Coins from New Super Mario Bros U – which are often located off the beaten wave, as it were. Netting these will bag you points and a permanent collectible you pocket once you finish the level. As such Wavey The Rocket clearly set itself up as a score attack dream, encouraging speedruns and the perfection of lines through its various challenges. Retrying completed levels is encouraged, not least to try and hit that elusive S ranking for each course. And you will replay levels, but not just for the score attack bragging rights. No, in fact the main reason will be that this is a challenging game to get to grips with. Controlling waves to denote movement is really interesting but certainly not the most intuitive control scheme initially. You will fail, a lot, and certainly in the early stages, you’ll just be living for the next checkpoint. Then, just as you’re getting into a groove, new obstacles and considerations are introduced that can throw you off. The split-second reactions required to get through new levels unscathed just won’t land, and you’ll feel a sense of hopelessness after numerous restarts. Thankfully, the pace with which you’re thrown back in the action does nullify the pain of failure somewhat.

The learning curve is pretty steep, and there are noticeable lulls, as certain levels feel easy by comparison before the next one sees you retrying for a good ten minutes before you claim victory. But for the most part it feels like a solid, gradual experience of more intense challenge. As such, returning to earlier levels to use your newfound wave skills on simpler challenges suddenly becomes much more appealing. Those high scores and ranks don’t feel so out of reach now. The only problem is getting back to those early levels can feel like a slog. There’s no level select throughout your playthrough, and the overworld between levels looks samey and can be difficult to memorise. It sorely needs a map to help navigate and a few useful shortcuts to loop back around would have been helpful. There are over eighty levels to test your brain, reactions, and frankly, your resolve. UpperRoom Games seemingly not scared to throw everything their minds could muster at you. Thankfully though the variety on offer helps keep things fresh. For the most part this is thanks to the different obstacles peppered throughout the course requiring different thought to overcome. As well as that there are even boss fights to survive as well as minigames littered throughout the overworld to test your wave dexterity in a more laid back setting. It’s certainly not lacking in content, and all of it is done against a backdrop of almost retro 90s beats. It’s a perfect backdrop not only to a game about precision of pulses, but also serves as a calming foil to the frantic reactionary gameplay going on around you.

Wavey The Rocket won’t be for everyone – it’s tough, has a difficult to wield movement system, and requires precision reactions that some may find frustrating. Even on the later levels, you’ll still make simple mistakes. However, for those up for a challenge, this is a very unique compilation that appears brash and obtuse, but is in fact incredibly well-designed with some very clever ideas that ramp up over time. It’s absolutely bonkers, but endearing, and there will be many who will find plenty to love in its unique brand of side-scrolling fun.

Unique way to move around
Well-designed levels
Lots of replayability

Wavey The Rocket is a challenging side-scroller with unique movement. It's difficult to master but there's plenty here for those willing to give it a go.