Dragon Age: Origins won the award for best RPG in 2009 but whilst the core game has been a great success the DLC has been a little hit and miss. The Stone Prisoner DLC was free with all new copies of the game, it offered a lengthy quest line and a truly unique companion. The Wardens Keep and Return To Ostagar DLC coming in at £5 a piece faired a little differently, only offering 15-30 minutes of content plus the addition of mediocre armour sets. Awakening is the first Dragon Age: Origins expansion and first meaty piece of DLC to be released from Bioware but how does it stand up against previous DLC and the core game? Hit the jump to find out.

STORY: The story of Awakening is set apart from the main game taking place after the events of Origins in the land of Amaranthine, a land which the recently deceased Arl Howe once governed from the strategical point of Vigils Keep. The player takes the role of Warden Commander working to rebuild the order of the Grey Wardens whilst also becoming the Arl of Amaranthine and dealing with the politics that comes with the job.

Players have the option of creating an all new Grey Warden or importing the hero of Ferelden from the main game. Importing a character will make minor changes to the main story of Awakening but will ensure different characters from the main game make cameo appearances depending on previous decisions. This means a whole new cast of characters are on hand to aid the Warden Commander in his quest to rid the world of Darkspawn. These new set of characters have colourful personalities and stories to match. As ever party members will talk amongst themselves offering some humour even in the darkest of dungeons.

Whilst the original game focused on a brewing civil war, Awakening puts the focus very much on the ever evolving Darkspawn. Traditionally the Darkspawn have been mindless puppets of the Archdemon but Awakening introduces the concept of intelligent Darkspawn with the introduction of The Architect. It’s good to see a little deeper into the Darkspawn world and get to know about what drives the ruthless horde.

Awakening is probably not the grand story found in Origins but is still a thrilling adventure that no fan of the game will want to miss.

GAMEPLAY: Perhaps a forgotten part of Dragon Age, gameplay is still a very important component in the story driven game and Awakening has seen some notable upgrades/changes in this department. Every RPG expansion should come with new skills, talents and abilities and Awakening is no exception. It offers three new skills in the shape of runecrafting, vitality and clarity. Runecrafting is more akin to a profession as it gives players the ability to craft runes, much like the way poison making and herbalism works. Vitality and clarity boost health and mana/stamina pools, both are key skills when enduring longer fights.

Whilst Dragon Age has been a successful game it was not perfect upon release with the class balance criticised for favouring the mage class. The rogue and warrior classes seemed a lot less useful, running out of stamina quickly reduced the melee classes to auto attack bots the AI could easily control. Awakening has gone some way to remedy the warriors plight with the introduction of some great new talents and the stamina draught. The draught acts like a mana potion for stamina users replenishing stamina ensuring warriors and rogues alike can continue to hit with big abilities longer into the fight. Warriors have some great new offensive abilities that will tear into multiple enemies ensuring having one in your party is not a wasted slot but whilst the warrior class is much improved some of the new passive abilities drain far too much stamina and must be micro managed to be of any use.

The gameplay is as solid as ever, the new specialisations and fixes just make the overall experience even better. 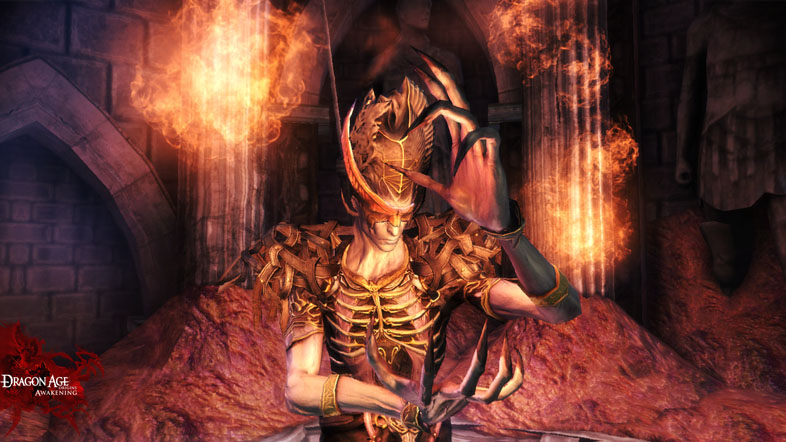 GRAPHICS: Graphically the game has not changed much, I did not notice any major changes to the style. The standout graphical “upgrade” comes in the form the new bosses that are included within the game. The Architect (with an all new character model) is the best example of this whilst the new Darkspawn found throughout Amaranthine seem to have been dressed up a little to match their new profile.

The new locations found in Awakening edge towards the darker side of the spectrum with some noticeable improvements to detail. The city of Amaranthine is impressive whilst not reaching the heights found in the Dwarfen city of Orzammar.

SOUND: The voice acting is of a very high stand and typical Bioware. Those guys have it sussed in the sound department immersing the player in the experience. The soundtrack goes some what unnoticed but that is actually a good sign as you never feel out of place during any given situation.

LONGEVITY: Awakening will take around 15-20 hours to complete which is not bad compared to most games released of late but still dwarfed by the core games 60-90 hours of gameplay. For an expansion costing roughly £15 -20 for the PC and £25-35 on consoles Awakening is well worth the money.

VERDICT: Awakening offers some really good improvements to Dragon Age and and a truly meaningful plot. It is almost Dragon age 2.0 and certainly offers more than your average expansion pack. If you enjoyed the main game then Awakening is more of a good thing and a no-brainer of a purchase. Gamers new to the RPG should work their way through the main game first before venturing to Amaranthine.

Nowadays I have my own cash and own all of the major consoles and a top of the range gaming PC. Dropping a grand to upgrade my PC is not a huge decision, it's a requirement! If you can't find me on the PS3 or 360 then I am probably on my PC playing the latest MMO, RTS or FPS.
MORE LIKE THIS
360awakeningBiowareDLC