Behind The Scenes Of L.A. Noire: Locations & Set Design

Rockstar Games are running a recurring feature where they will be going backstage, behind the inner workings of Team Bondi to show gamers how they went about putting together the look of 1940’s Los Angeles in-game. The first of these will be looking at the Production Design for the game – allowing for believable locations and authentic period sets. With the input of Team Bondi Production Designer Simon Wood, let us take a look at how they reproduced the seedy world of Los Angeles.

Back in July, we found out Rockstar Games had been scouting out Los Angeles and doing location research for a forthcoming game. Back then we weren’t sure what title it was for. Now we know it was L.A. Noire – and Team Bondi traveled to L.A. and toured many historical locations, tracking down any traces of old Los Angeles that would have been there at the time the game is set. Thousands of reference photos were key in building the places players will explore as they investigate cases. The places researched and photographed for inclusion range from glamorous restaurants to the most dispicable dive hotels. For instance the Barclay Hotel in L.A. which has been used as a location in many Hollywood films, was used as the reference point for a run-down apartment block. “Sometimes there’s no better substitute than real life,” says Wood. 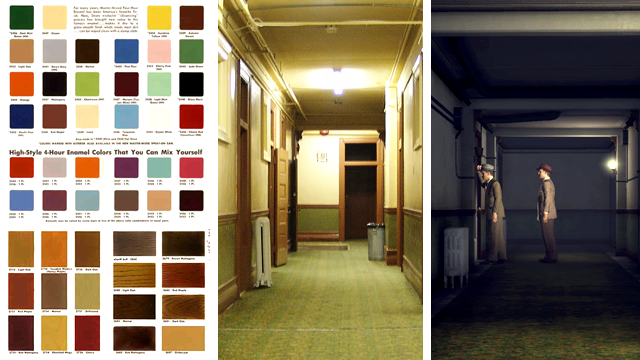 Left: Paint swatches from actual 1940’s buildings were used in the game’s color palette; Middle: From Team Bondi’s tour of Los Angeles locations – a Hallway from the landmark Barclay Hotel; Right: The final scene – clearly inspired by the source material.

The key here was finding the balance between photographed, real locations and artistic design or augmentation. Wood explains, “Some were designed from the ground up as we couldn’t find what truly matched the needs of the gameplay or the original script by Brendan (McNamara, Team Bondi Studio Head). But other locations are interiors that we inserted into wonderful existing buildings. The Art guys in the team did an amazing job, as you really can’t tell what was made up by us and what was an original fabrication.” Even vintage magazines or archive images were mined for useful imagery. “I bought from eBay old House & Garden magazines, along with Architectural Digest, Sears catalogues and Interior Decorating guides from the 40’s. These were invaluable as not only did it show you the best of how they styled their homes, but it showed you how they lived.”

These bibles would be used to keep each location unique, but to allow overall themes and ideas to shine through. “I had a checklist of which styles of architecture and colour palettes would work well with the characters Brendan was writing, so that their persona was reflected in their personal surroundings.” From what we have seen so far, they seem to have captured the look of the dirty, dank Los Angeles underworld perfectly and the game world is looking very impressive so far.