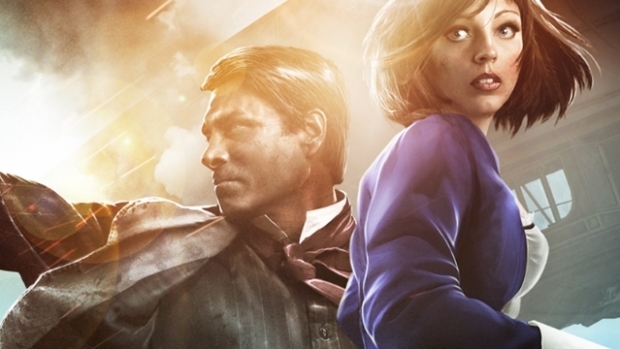 You’d have to search pretty hard among gamers to find someone not eagerly anticipating BioShock’s return. Despite universal agreement that the second game wasn’t a patch on that original, spellbinding, monumental effort of a game, all signs are pointing to a return to what made that first title so brilliant.

But returning to the well is a scary thing to do, for both the developer and fans alike. Having such big shoes to fill meant that the second game could simply never live up to its predecessor, and BioShock was like lightning in a bottle. But enough time has passed now that we’re all ready for Infinite. The only question left after a hyperbolic pre-launch campaign is: Can Irrational do it again? The answer is an emphatic yes.

Put simply, main protagonist Booker DeWitt is on a mission. Through poor judgement, he owes the wrong people money and has been told: “Bring us the girl, wipe out the debt”. The girl in question is Elizabeth, also known as the lamb, imprisoned in the sky-city of Columbia, a place ruled by religious nut Comstock, who can see the future, apparently. After rescuing Elizabeth, Booker has no choice but to fight his way to safety, discovering secrets along the way, whilst Elizabeth realises the world is not what it seems.

There are dark tones throughout, with early story beats that focus on the racism of Columbia. The Vox Populi (Voice of the People) are trying to start revolution, believing that Comstock’s powers of foresight are nothing more than an illusion. As the story continues, Elizabeth reveals that she can open tears into space and time, and therein lies the meat of the story. Just exactly what are these tears? Why can Elizabeth do these things, and who is she anyway? I won’t spoil these things here, but I will say that by the game’s closing credits, your jaw will be on the floor. Irrational completely deliver on a compelling story that unfolds in a magnificent way, touching on themes most games stay clear of, whilst giving the player resolution and satisfaction. It’s a tremendous story, and possibly one of the best I’ve ever seen in a video game. It’s early days, and a lengthy period of reflection is always necessary, but at this point, I think Infinite even eclipses the first BioShock in terms of narrative. Columbia is a living, breathing place. It almost feels clichéd to say it, but the effort poured into making it so is astonishing. Instead of the dark, foreboding visuals that accompanied the likes of BioShock 1 and 2, Infinite opts instead for a beautiful and bright colour palette. It just never gets boring to look at, with each new area showcasing visual flair, with a consistency that means every area feels connected, and yet individual.

It’s not perfect, though, as some textures are a bit ropey up close; a problem I think would probably be solved with the PC version of the game. But the art style itself is one of the stars of the show, and nothing feels accidental, with every tiny piece of detail feeling purposeful, leaving you wondering if that small moment that feels almost throwaway is actually important to the story.

If the visuals are wonderful, the audio actually sets new standards for video game design. The interactions between Booker and Elizabeth throughout are natural (thanks to the splendid writing) and rather than feeling like you’re someone who’s just along for the ride, you’ll wonder how you ever lived without Elizabeth. All the voice acting is top notch, and Booker constantly voices his opinions on things in a manner completely at odds with BioShock’s original silent protagonist. The writing is so excellent, that despite the player’s voice (Booker) giving his opinions, you feel a part of the story, and not just someone playing Booker’s part in a video game. The music design warrants a special mention, purely because of how it helps create yet more immersion. Early on during the festival taking place on Columbia as you arrive, there’s a moment where a barbershop quartet appear, singing “God Only Knows“. Now, if you want (and hell, maybe most people will) you can just walk away, and continue the story – but I stopped, and watched and listened to the beautiful rendition of the song in full, before the quartet’s floating airship disappeared again. Incidental, sure, but incredible.

And there are whole moments like this that you could miss if you’re ignoring the world of Columbia. A radio playing an old-timey version of “Tainted Love”, or in a bar’s basement, a guitar you can interact with that starts Booker and Elizabeth singing and playing “Will the Circle be Unbroken” to a small child who is cowering in fear. It’s a moment you could completely miss, yet it’s one of the best, most touching moments in the game. Some could argue it’s foolish to make a moment like that optional, but I adore Irrational for rewarding the player who will explore this world that they have created.

Infinite is still a shooter through and through, but the wealth of gun choice is for a reason this time. Each one feels like it has a use, and rather than being an arbitrary choice as to which two you can carry at any given time, there are weapons that are better suited for different enemies. Of course, this wouldn’t be BioShock without the plasmids, which this time around are called Vigors, though their existence is never actually explained. There are eight in total, and you can equip two at any given time (there’s a selection wheel for the Vigors so you can swap them out quickly), and it’s fun to find out which ones work best together. Some of the favourites of the series return (renamed of course): Shock Jockey (Electricity), Devil’s Kiss (Fire), etc. Using these Vigors will sometimes make your weapons do more damage, and you can chain effects too. It’s possible to dominate the enemy if you’re doing it right, and it’s a lot of fun doing so. Each weapon is upgradeable too, but unless you’re collecting every single piece of money in the game, it’s going to be hard to get everything fully upgraded, so it’s likely you’ll end up with favourites. You can also collect Gear, which is hidden throughout the world. There are four pieces you can wear at any time (pants, hat, etc) and these also have effects on the gameplay. Maybe you’ll wear a hat that causes fire damage to your enemies when they melee attack you, or maybe you’ll wear some pants that cause area damage when you jump off a sky-line.

Speaking of which, the sky-lines had the potential to be either great, or terrible. Thankfully, they’re superb. Flying around on the equivalent of zip-lines is euphoric, as every gun is usable whilst up high, and you can quickly change direction, or jump to another sky-line altogether. You can instantly kill enemies if you time it right and jump off right to their location, but the sky-lines also provide an opportunity to escape quickly to higher ground.

But there’s more, Elizabeth’s ability to open tears creates further tactical opportunities on the battlefield. If you see a faded object, you can hold X (or Square on PlayStation 3) over it and Elizabeth will bring that object into your reality. These tears range from simple turrets, to bringing in whole new walls for you to get into cover behind. Combine all of the above and you’ve got a battle scenario where you use the possession Vigor to take over an enemy, while Elizabeth brings a turret into your reality to help you, and you’re sky-lining around the environment picking off enemies. It’s incredible. Elizabeth has more uses than just tears though. Through being locked away, she’s learned all about the art of lock-picking, so as well as collecting money throughout the game to buy the unlocks, Vigor upgrades and health or ammo, you also find lockpicks which tend to be for accessing hidden away areas with nice rewards. Often behind locked doors you’ll find an upgrade which allows you to raise your overall health, shield, or Vigor bar. Mid-battle, Elizabeth will also find you ammo, health, and salts – she’s incredibly useful, yet she can take care of herself. Again, you’ll wonder how you ever survived without an Elizabeth.

But there are a few difficulty spikes which will seriously vex most players (on Normal difficulty), one of which comes very late on in the game. Similarly to BioShock’s vita chambers, you can’t actually die in Infinite. If you lose all your health, you’ll drop and Elizabeth will drag you to safety and inject you. You’ll lose some money, but you’ll gain back some health and salts (Vigor power, essentially), whilst your enemies will get some health back too. It’s frustrating when it happens repeatedly through these difficulty spikes, there’s no question.

The enemies themselves seem pretty smart, but most of the time the sheer number of them will be the hardest part. Whilst there are no Big Daddy enemies here, there are larger, stronger enemies that require more thought to kill. For example, Patriots take more damage from the back, and a Handyman takes more damage if you shoot him in the heart. There aren’t too many boss fights, but one of them is actually rather frustrating, compounded by the fact you take them on three times in a row. So while it’s not perfect, most of BioShock Infinite is fun, entertaining and designed with the player in mind. You’ll probably finish BioShock Infinite in around 10 hours, but there’s no chance you’ll have seen everything it has to offer in that time. With 80 audio logs to find, you’re going to have to dig deep to rinse every piece of content. Aside from the Voxophones (audio logs) there are also Telescopes and Kinetoscopes (short old-timey videos that chart the history of Columbia) for you to find, and there are plenty of weapon specific achievements to unlock, too. Once you complete the game, 1999 mode becomes available, which is the hardest difficulty setting. With limited resources, your skills really will be tested.

VERDICT: Despite the difficulty spikes, Irrational Games have created a stunning world for the player to lose themselves in. With a story that will leave jaws on the floor, character interaction throughout that is almost unparalleled, and a level of care and attention to detail that is  very rarely found in a video game, BioShock Infinite is a rip-roaring, emotionally-fuelled success, and Columbia is one of the most masterfully created and well-realised locations ever designed in a game.

A beautiful example of single player gaming being King, there are no distractions apart from the ones inside the game itself, and as you use your sky hook to move around with breathtaking abandon, you’ll wish every game could be this thought-provoking, because like the very best games out there, BioShock Infinite stays with the player long after the credits have rolled. You’ll be dissecting this one for months to come. Bravo, Irrational Games. Bravo.