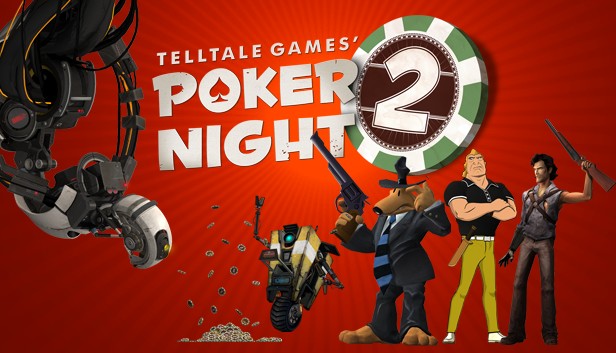 Thanks to a certain game released in 2012, Telltale Games have become a rather hot property. But those assuming that Poker Night 2 is them stepping outside of their comfort zone may be mistaken (the “2” in the title is a bit of a giveaway), as one of the traits running through almost every game from the almost-10-year-old studio is a great sense of humour. More often than not, it’s the characters themselves that make a Telltale-developed game stand out, so what happens when they utilise characters from other people’s games, blended with their own script writing and humour? Well, apparently you get a Poker game, and a decent one at that.

Bringing together Claptrap, Sam & Max (Max plays, Sam doesn’t), Brock Sampson (from The Venture Bros. animated TV show) and Ash Williams (from Army of Darkness) is a recipe for japes at the table, and did I mention that GLaDOS is the master of ceremonies, and will routinely insult you – the unnamed “Player” – and your playing skills? Yeah, this is a Telltale game, alright.

Straight away it’s worth noting that (save for some online leaderboards) this is a single player experience, and if you’re after any form of multiplayer Poker experience whatsoever, then you’re best off sticking with something like Full House Poker – but, where a multiplayer-focused card game might force you to rush decisions thanks to a turn-timer, Poker Night 2 allows you to revel in your surroundings, take in the ambience, relax and listen to some stories from the brilliant characters you share a table with. As the hand plays out, characters will (with all the correct voice actors, apart from Bruce Campbell for Ash, sadly, but perhaps understandably) start telling stories, and the other guys will chip in with witticisms of their own. It’s actually quite brilliant – although it does have a limited life-cycle, and after a while you are faced with a choice: do you listen to Claptrap talk about having a hair transplant for the third time, or do you break the immersion and just skip to the end of that particular turn?

But Telltale have created a great environment to enjoy a calming game of Poker in, and after you’ve gained sufficient skill you can even ply your opponents with drink, which will reveal their “tell” for you to exploit. Even better, once eliminated, the colourful characters don’t just disappear from the game, they’ll slink off to a background spot and continue their lives; Sam and Max might sit at the bar chatting to Mad Moxxi (she’s the bartender); Ash might pull out his boomstick, before angrily slumping off to elsewhere in the Inventory’s dingy locale. When you first hear Claptrap flirting with GLADoS, it’s a real treat, as is all of the interaction that surrounds you, the silent player.

The actual betting A.I. is slightly odd at times, with random “all-in” moments that are totally bizarre. Who goes all-in before the flop? It’s a bit strange, but in a way makes the oddity of your opponents stand out even more. Ash being reckless when he’s close to busting out does sort-of tie-in with his character, after all. Texas Hold ‘Em is the order of the day, and it plays out exactly as you’d imagine – with blinds raising as you progress through any one sitting. You can’t change the blinds from the get-to, and there’s precious little in the way of options, overall.

There are a few things to unlock in Poker Night 2, such as card faces, chips or felts – some are better than others, and you can purchase them using in-game tokens that are earned after each tournament, depending on how well you do. Unlock all three Borderlands items, and you’ll get an achievement, as well as a visual treat. But the best aspects of the unlock system are the bounty unlocks, which give you additional content for other games. All users (excluding iOS players) can unlock Borderlands 2 skins and heads, while Xbox 360 players can unlock Avatar items, PlayStation 3 gamers can grab premium themes, and Steam users can get Team Fortress 2 items. These are grabbed by meeting requirements set before tournaments, such as winning two hands in a row, or stealing the pot. When you’ve achieved the 3 requirements, you can take place in a match that, if you win, will give you the bounty unlock. Along with Texas Hold ‘Em, present is Omaha Hold ‘Em. A twist on Texas, Omaha gives you four cards instead of the two, and asks you to make the best hand you can with any two of them, and three of the community cards. It’s great to see this extra mode in here as it adds legs to a game that otherwise relies heavily on your affection for the characters that you’re playing against, but after a dabble, I wouldn’t be surprised to see people go back to Texas for the duration.

As you’d expect, the dialogue is pitch perfect, and visually it’s a traditionally “Telltale” styled game. There are a few slight niggles, but most are present in all of their games, so expect to see some transitions that aren’t too smooth. Thankfully, given the nature of a sit-down Poker tournament, the visuals absolutely satisfy, and the issues are very minor.

VERDICT: Poker Night 2 is a thoroughly enjoyable game, made so by the characters that are present. The trouble is that, once the novelty wears off, you’re left with repetition and an offline-only Poker game. Telltale absolutely nail the humour and visuals – don’t they always? – and you’ll definitely get your money’s worth out of your time with Poker Night 2, just don’t go in expecting something you’ll be playing for longer than a few weeks. At the price though, with the characters on offer arguably bettering the first game, you’d be mad not to at least consider taking a look. Editor-in-Chief here at GodisaGeek, I organise almost every bit of content as well as running our weekly Podcast, and being the lead producer on our YouTube Channel. That means I'm very busy and sometimes grumpy. Yay!
MORE LIKE THIS
Telltale GamesTelltale Games' Poker Night 2