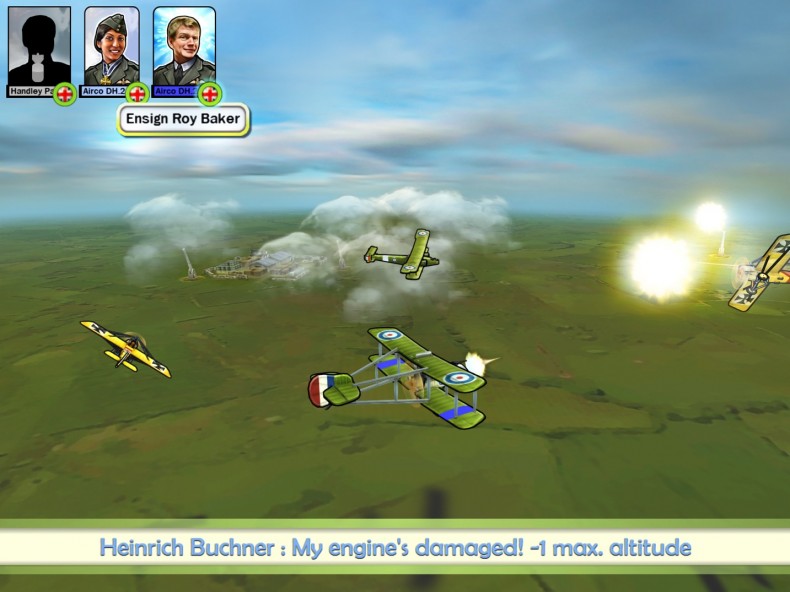 With XCOM: Enemy Unknown still being spoken about because of the upcoming iOS version of the game, FirAxis also have other mobile titles on the horizon. Tomorrow, Haunted Hollow comes to the platform and on May 9, the previously unannounced, and free to download, Sid Meier’s Ace Patrol makes its way to Apple’s App Store.

Recently, we had the opportunity to speak to Associate Producer at Firaxis Lena Brenk, about Ace Patrol, among other things.

FirAxis haven’t released too many games in the mobile space, of course there was the iOS port of Civilisation Revolution back in 2009, but ever since then the studio hasn’t created many mobile titles, until now. With the upcoming Haunted Hollow and the iOS port of XCOM: Enemy Unknown, as a developer, do FirAxis see something in mobile gaming that they didn’t before?

We are always interested in providing fun gameplay, strategy experiences on any platform. Traditionally we are more of a PC developer, but we’ve always been open to other platforms as well, and it seems like the time was right for us to try out other things. So, it’s not a specific change in direction for us. It felt very natural to just see what gameplay experiences we could offer on a somewhat different platform.

Also, it felt like turn-based strategy gaming – what we’ve usually been doing in the past – is something that lends itself very well to the mobile space as turn-based is something where if you get interrupted while you’re on the go with your mobile device, it doesn’t take too much from the gaming experience – you won’t lose because you’re interrupted in the middle of the action, so it felt very natural for us to look at that platform and see what we can do there. With Civ Revolution in the past and Pirates on iOS, we have some FirAxis titles already out there, so it felt like the next step was very natural.

Can you summarise the general story of Ace Patrol for our readers?

You’re in charge of a squadron of World War I fighter plane pilots. You pick one Ace that you particularly care about, usually, and you fight throughout World War I against an enemy nation. So, if you start the usual free route, you will play [as] the British first [and]you will fly with your pilot against German fighter planes. You have a campaign of four battles that each have six missions to fight through – you will upgrade your pilot, you will earn upgrades to your plane, so you can fly higher for example or [inflict] more damage with your guns because they’re more accurate if you upgrade them. You can collect new manoeuvres for your pilot so they can learn things like the Immelman manoeuvre, or rolls and loops so they get more manoeuvrable and therefore stronger in future missions. It’s [a] turn-based, hex-based strategy game. Also, with Haunted Hollow seeming to appeal, even on an aesthetic level, to a younger audience and XCOM: Enemy Unknown bringing in the hardcore to the iOS space, who do you think Ace Patrol will generally appeal to?

Well, the visual style isn’t as cute as the Haunted Hollow style is. We see both games as being pretty accessible. Ace Patrol, with the World War I setting, has a more serious setting. It’s also a historical setting, so I think that is of interest for people that like history. But, me personally for example, I’m not necessarily usually a World War genre player so World War settings are not something that will entice me to play, specifically.

But, I’m a strategy player and I got really hooked [on] this game and tried to get the high scores and get onto leaderboards, just because it is – at the heart – a strategy game in that setting. I think it will appeal to strategy players, certainly. But, I can see this appealing to a wider audience because it is very accessible. It’s not as deep [a] hardcore strategy [game] as some PC titles might be.

That’s good to hear because when you look at, taking XCOM: Enemy Unknown again, that did pull in some people that wouldn’t have maybe dabbled in strategy games before, so you think Ace Patrol could possibly do the same?

And, you are able to upgrade your pilots and their abilities throughout the campaign. Is this solely done through gameplay, or are there any in-app purchases in the game?

Upgrading your pilots and planes [is] not purchasable, so you will have to earn that in-game. The free portion of the game is meant as somewhat of a demo – or light version – where you can just jump into the experience and see if you like it and play the first six missions up to the first boss battle to just experience the game. If you want to unlock the full game you can buy the British campaign and you can just continue that playthrough you already started. If you really like it, you can purchase other campaigns: the German, French or the American campaign. What we also have is that each pilot at the beginning – the Ace pilot, the one you pick out at the very beginning of the game – have a special trait. So, those are things [such as] – this pilot has a chance of one-hitting enemies or, can perform specific and complicated manoeuvres in the clouds which usually isn’t accessible to everyone, or repair his plane faster in-between missions. We have a set of eight more special traits that come along with premium skins for the planes that you can purchase as an in-app purchase which will get added to the pool of special traits that you pick at the beginning of the game. And then we have base upgrades – after every mission, you return to your base with your plane and depending on how badly you got shot at, or if you crashed, you are in hospital there, or your plane gets repaired there and you might have to skip a mission or two, or more depending on how serious the injury is, or the repairwork is. You can buy upgrades for your base where you buy a hospital, for example – a field hospital – so that the pilot heals faster and that’s basically how [in-app purchases] work.

In terms of the main campaign, it sounds pretty intricate, but there is multiplayer in the game as well. I believe there are two separate components of multiplayer: you have asynchronous multiplayer and something called Two-Player Hot-Pad, correct?

Yes. Hot-Pad is basically pass and play so you play on the same iPad, just with your friend right there in the same space. Asynchronous multiplayer is through Game Center where you just take your turn and then pass the game over to your friend, who plays on his iPad, or iPhone and then passes the turn back to you.

Is Ace Patrol a universal app? Just before you go Lena, there is one question that I have to ask. It’s kind of a tradition with GodisaGeek where we ask our interviewees one simple question, tomato ketchup related. Do you keep yours in the fridge or the cupboard?

The fridge. Always the fridge.

Is there any reasoning behind that?

I think that’s how my parents did it, so I assumed that was the proper way of doing it. I never questioned that. Now I’ll have to do research. [laughs]