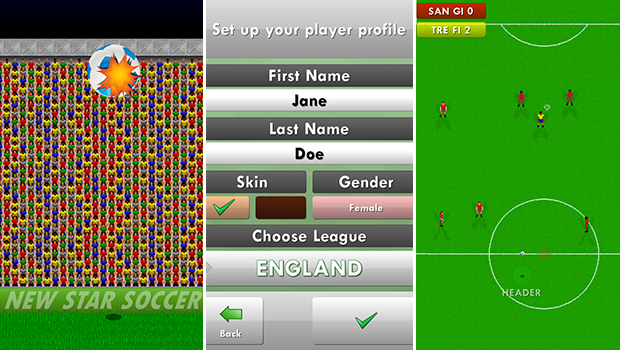 New Star Soccer 1.5 introduces the option to play as a female footballer, headers, iPhone 5 support and social media integration as well as a ton of other features.

Matter of fact, we’ll just list everything but first a bit of shameless plugging.

We spoke to the game’s creator Simon Read in August about the update and what it was like to shock the gaming world when he won the BAFTA for Best Sports or Fitness Game earlier this year.

• Headers!
• New boots! New Swerve feature added to premium boots.
• New Energy Drink! (NRG Bolt – increases energy plus 3 relationships and 3 skills.)
• Choose differently focussed play during matches – attacking, defensive or balanced.
• Defenders now close you down whilst you aim your shot.
• Replenish your energy during a game.
• New lifestyle items to purchase.
• Three save game slots.
• Skills deteriorate over time, and the older you get, the more you have to keep on top of your skills.
• Retirement option. Choose the optimal time to retire before your skills deteriorate and you start to ruin the memory of your past achievements. Includes career score and various achievements.
• Additional commentary to add variety.
• Hire a personal trainer, recover quicker, have more energy.
• Get yourself an agent and improve your contracts!
• New newspaper headlines, incidents etc.
• All new game achievements.
• All new audio.
• New footballs each with their own attributes.
• Lots of UI tweaks and improvements, short-cuts and time-savers.
• New pre-match location screen.
• New player awards (player of the year, young player of the year etc.)
• Updated league structure information for new 2013-2014 football season.
• Male / Female select!
• New unlockable ‘hard mode’ for the seasoned veterans!
• Night time matches.
• Twitter and Facebook integration.

A freelance journo with aspirations of becoming a games journalist, I've been gaming since the age of 7 when I first picked up a copy of Wave Race for my brand new Gameboy. A firm believer that Vice City is the best GTA, I'm less decisive about the favourite original starter Pokémon. Charsquirtasaur?
MORE LIKE THIS
New Star GamesNew Star Soccer