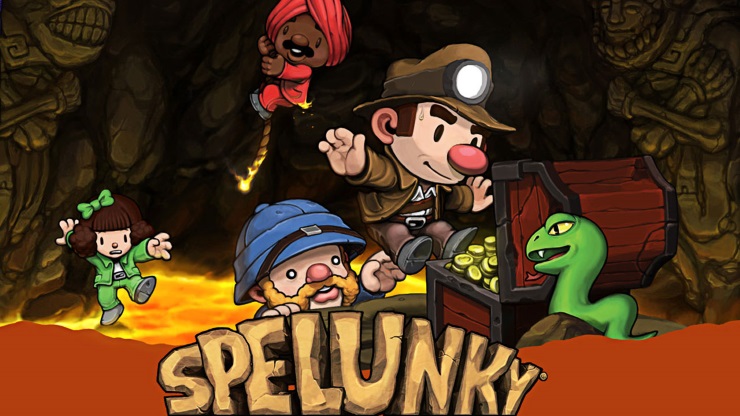 Spelunky is the ultimate “I’ll just have a quick go” game. Advert break in my favourite show? Get the Vita out. It doesn’t matter that I’ll end a run only to realise I’ve missed the rest of the programme, because I nearly reached the Temple that time. One more go to… oh, bat bounced me into some spikes straight away. Well that doesn’t count obviously. Just one more…

This scene plays out every few days, and has done since I originally downloaded Spelunky on my Vita last year. It’s ridiculous when you think of some of the quality titles I’ve played since then – South Park, Mario Kart 8, The Last of Us – yet eventually I move on; even Destiny will be gathering dust before I stop playing Spelunky.

I guess it would be easy to put this down to a lack of quality titles on Sony’s handheld – which is the easiest type of platform to just pick up at a moment’s notice – but that would be unfair. Hotline Miami sits morosely on the homescreen, blinking next to Wipeout, both perfect for five minutes play but both finished with – at least for now. No, Spelunky’s longevity is all its own making, addictive on any platform you choose to play it on. The groundwork is done in the random generation of levels, making every run a new challenge. You can speed run many titles just from muscle memory – I have a weird obsession with clearing the original Crash Bandicoot as quickly as possible – but I would never dare try and rush Spelunky after hundreds, or even thousands, of runs.

And that’s because its rules are exquisite, maybe even perfect. Every jump will carry you this far and every bat will notice you at that distance, it’s consistent, and that’s why when a mis-thrown rock ricochets of a wall and hits you in the face, when a spider knocks you off a ledge into an arrow trap or when a Tiki Man’s boomerang flings you between two Tiki traps, ending an otherwise flawless run, you don’t cry out in frustration because it is all fair.

Added onto all of this is the knowledge in the back of your mind that you’ve only got a little bit of time to clear each level before the ghost shows up. Not only do you have the visible enemies, traps and hazards to navigate through, but you have to do so against the clock, all the while attempting to get more items and health to better tackle the trials ahead. It’s the perfect balance of caution vs. time. The foundations alone are enough to bring you back time and time again, but Spelunky offers up more and more to keep you enthralled. There are six hidden areas to find – unreferenced within the game itself – some requiring a ridiculously convoluted series of actions to find; it’s incredible that anyone ever found them. It’s even more staggering when the base levels are so hard themselves that completing them alone is challenge enough for most.

There’s simply always more to find, always a reason to keep playing. Do I pop to the blackmarket on this run, do I just try to beat Olmec, or do I go the whole hog and try and face King Yama. Even if you have done all of this then you’ll go back to beat your best time.

Whatever you choose it is your own skills that will determine how well you do, there’s no artificial hand holding. Sure you can complain that there were perhaps no stores early on in your run, or a particularly nasty series of traps, but you know deep down that you could have done it, if only you were a little better. The cherry on the cake is the Daily Challenge, where every player gets to try a run on the same levels. It adds a competitive edge to the whole package that was otherwise missing (even if the measurement used for the leaderboard score isn’t perfect).

At the start of a run I may aim to reach Hell, but I could easily die in the mines, or I could pop on during an ad break and lose an hour doing a perfect run. It’s always unpredictable, but never inconsistent; it’s rules are fair, when you die it is your fault, but you’ll never be frustrated with the game, but instead with your own clumsy skills. And that’s why I’m still playing Spelunky, and will probably still be playing it this time next year.

You can find me on Twitter and PSN as MacShanks, and feel free to hit me up if you have any questions, queries or feedback!
MORE LIKE THIS
Spelunky

Spelunky 2 announced for PS4 and Steam