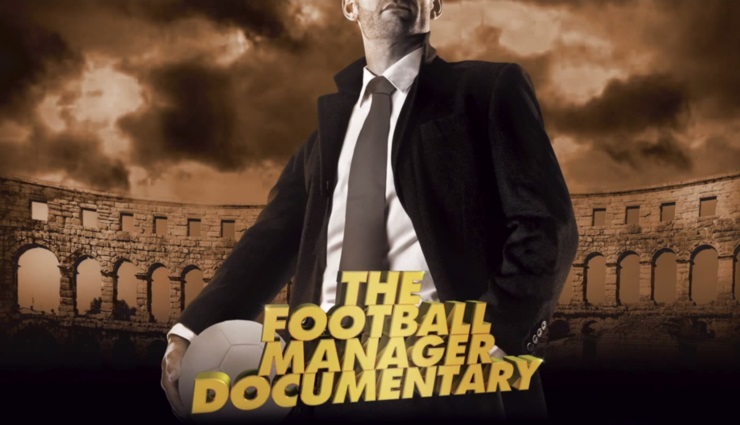 I’d never class myself as a super-fan of the Football Manager games, but I’ve played many of them across PC, PSP and iOS, and so I was looking forward to watching this. And it’s a love letter to Sports Interactive’s titles in every sense, wheeling many people, both famous (Paolo Nutini, Ole Gunnar Solksjaer) and ordinary to talk about the effect the games have had on their lives and charting the game’s rise from Football Manager simulator to player database by way of cultural phenomenon.

It starts off as any documentary of a sub culture would: anecdotes – and it continues in this vein for a full seventy-two minutes. It covers many facets of the culture surrounding the series, but never deviates from the anecdotal way of putting across information. You’re treated to explanations of people’s favourite players, the concept of ‘suiting’ (putting on a suit for a big match), and how Sports Interactive co-ordinates their scouting network to make sure their stats and other information is up to date.

While I can understand the idea of timing this documentary to coincide with the year of Football Manager’s 10th anniversary, it probably would have been better received when FM was at the height of its realisation as a phenomenon and used to educate people to the quirks that surround it. While things like ‘suiting’ might make the casual observer raise an eyebrow, An Alternative Reality never hits the rubbernecking highs of something like ‘Bronies’.

I realise that it makes it sound like I’m hating on this, but I’m looking at it from an insider’s perspective. A lot of the information was stuff I already knew. So, putting that aside, the anecdotes were funny and to the outsider would be very informative. You’ll chuckle as people talk about the unknown kid who became the best player in the world only to not make the grade in real life, and you’ll sit in disbelief as people tell you the lengths they go to to truly get into the game. And if you’ve played Football Manager you’ll nod along silently thinking to yourself “I do that too.”.

If the concept of the game is alien to you then it’s worth a watch, it’s a nice story about a couple of guys who had an idea and made it big, and how that idea became special to many people. If you are familiar then it’s still worth a watch just to hear it all again, and re-affirm that it’s not just you who does the things you do.

Read our review of Football Manager 2015.

A lover, not a fighter and an all round good guy (he would say that, he wrote this after all), he's happy to be here as part of GIAG.
MORE LIKE THIS
Football ManagerSports Interactive