previous
TMNT: Shredder's Revenge sells 1 million copies in its first week
random
next
Yomawari: Lost in the Dark is releasing in October
0 comments 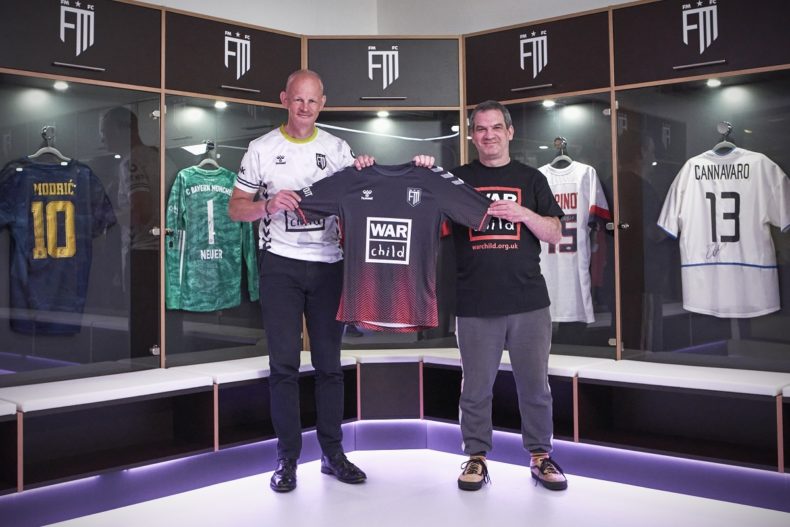 It has been announced today that the limited edition War Child football shirt has sold out in a matter of days, raising £30k in the process. The shirt was made by Sports Interactive, the developers behind popular football management sim, Football Manager. It’s the second year the studio has made the FMFC away shirt available for purchase, providing fans with a chance to buy one of only 600 made.

FMFC is the Football Manager members’ club allows players to get an early look at new features, gameplay inspiration. feature drops, and studio news on the game. Each season two football shirts are made for both home and away purposes, with the latter being dedicated to War Child, the club’s shirt sponsor. Last year, the shirt raised £20k, with proceeds going directly to ensuring a safe future for children living through war.

War Child aims to reach children in the early stages of conflict, helping to deliver life-changing services and support in hazardous communities where safety and their health are the number one priority. This year’s huge total of £30k will do even more good than last year, helping to continue the great work War Child is doing around the world. Miles Jacobson, Studio Director of Sports Interactive has been a big supporter of War Child since 1995 when he worked for Food Records as A&R, helping to get Blur involved on the infamous Help album which raised £1.25 million.

“No child has started a war, so children shouldn’t be affected by war. It’s a simple premise, but sadly one that isn’t true. I first became aware of War Child when they were providing psychosocial support for children during the Bosnian war in the 90s,” said Miles. “Thirty years later they are providing help in war zones around the world, always finding the most pressing issue to tackle in those zones for children. Whether that be safe spaces for kids to study in Central African Republic and Afghanistan or the plethora of child protection services in Yemen, they have a lean yet powerful team who efficiently raise funds and distribute them in the right way via their local teams and the best local practitioners.”

Since coming to Sports Interactive, he has continued to work with War Child and raise a further £1.5 million with fundraising initiatives, brand support, awareness building, marketing, and in-game advertising. Today, Miles has dedicated his work to a new War Child project in Central African Republic which intends to fight poverty, while at the same time promoting sustainability and peacekeeping.

He continued, “I’ve been able to see their work first hand in both conflict and post conflict zones and it’s truly incredible the difference that they make to children’s lives. I’m so grateful for the work that they do, and honoured that I’ve been involved with them for much of their history as an organisation. It is an honour and a privilege for us at Sports Interactive, and me personally, to be involved in their work – whether it be promoting them as a charity, or with the donations that we are able to give from people buying our games, and our community has been so supportive of this work too”

Rob Williams, CEO of War Child UK said: “We are so lucky to have Miles in our corner. His unrelenting support and hard work has seen significant sums of money raised to fund our vital work around the world, and has put War Child on the map for the gaming industry – resulting in a ground swell of support. We are thrilled to welcome him into the fold as an official Industry Ambassador, as a reflection of our gratitude to his years of passion and energy for our cause. Miles has truly helped us reach more children affected by conflict and give them the chance of a better future”

Video games are cool. Don't let anybody tell you any different.
MORE LIKE THIS
Football ManagerSports Interactivewar child