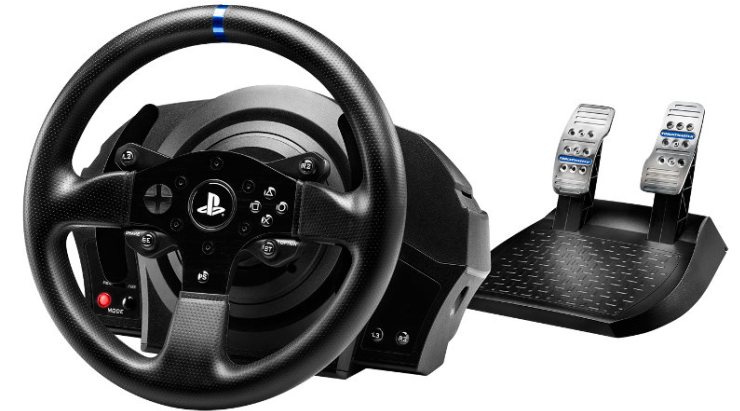 Racing wheels are usually the provision of PC gamers, with their ultra realistic racing games that make Gran Turismo look like Mario Kart. With the T300 RS however, PlayStation owners have access to the best of the best, a racing wheel that is incredibly hard to fault. But that doesn’t mean you should leap in and buy it.

The unit itself oozes quality. A chunky base unit – which can be clamped to most desk surfaces quite easily – supports the wheel, a textured rubber affair with a brushed metal centre. Two metal flappy paddle gears sit behind the wheel, and there’s the full range of buttons you find on a Dualshock controller, minus the DS4’s touchpad. There’s also a switch to change between PS4 and PS3 modes. It’s matched in quality by the pedals. The T300 comes with a brake and accelerator set – although a pedal set with a clutch is compatible. The base is plastic, with metal plates on the pedals that can be adjusted for height via the removal of two small screws.

The look of the device reflects how it feels on track. I tested the T300 primarily with DriveClub – although Grid Autosport and F1 2013 were also used – and sensitivity is spot on. The slightest turn of the wheel translates into the same on track, as does a squeeze on the accelerator, and once you stick it in manual and start flicking between gears you’ll wonder how you ever played with a pad.

As good as this is, the force-feedback is where the T300 truly shines. Lose the back end and you’ll have to wrestle to keep the car on track, but because of the accuracy of the controls you won’t overcompensate. DriveClub – which we criticised for controlling somewhere in-between a realistic racer and an arcade one – suddenly makes sense when using a wheel, with much more realistic handling.

All of this is not to say the T300 is perfect, however. The initial setup is a little confusing, locking the base and the wheel together is a matter of turning one first and then the other, something not made massively clear in the instructions. You’ll also have to spend a little bit of time in each games’ menus tailoring the feedback levels, as I found the default setting slightly too powerful, wrenching your arms around uncomfortably. As aesthetically pleasing as the unit looks, it does have a few problems as well. The metal gear paddles are a little sharp, digging in on the edges when you need to grab them, and if you’re turning at the same time – likely if you’re slowing down into a corner – it can be painful. Another issue is that the pedal unit slips a lot unless you’re playing on carpet, so you’ll need a mat to hold it in place.

There are also several wires that make things look a little messy, from the unit to your console, to the pedals and a chunky power cable. Given that it draws its own power, I don’t see why it couldn’t connect wirelessly to your console at least. That said, connecting it to your console is easy enough, with a PS4 automatically recognising it, although PS3 compatibility is a little more hit and miss, particularly on older games.

Overall though, the T300 is a fantastic piece of kit and for the PS4 there isn’t a better wheel you can buy. The only major issue ties back into why wheels have mainly been the domain of PC gamers: you really need to be sat playing this at a desk, which is not where most of you will have your console set up, in turn relegating the wheel to the rare occasions you want a bit more realism. £300 is quite expensive for something that’s only going to see occasional use – made even worse by the lack of racing titles on the PS4 at the moment – and as it essentially doubles the price of your console, it’s maybe be one just for the true racing enthusiasts among you.

You can find me on Twitter and PSN as MacShanks, and feel free to hit me up if you have any questions, queries or feedback!
MORE LIKE THIS
Thrustmaster