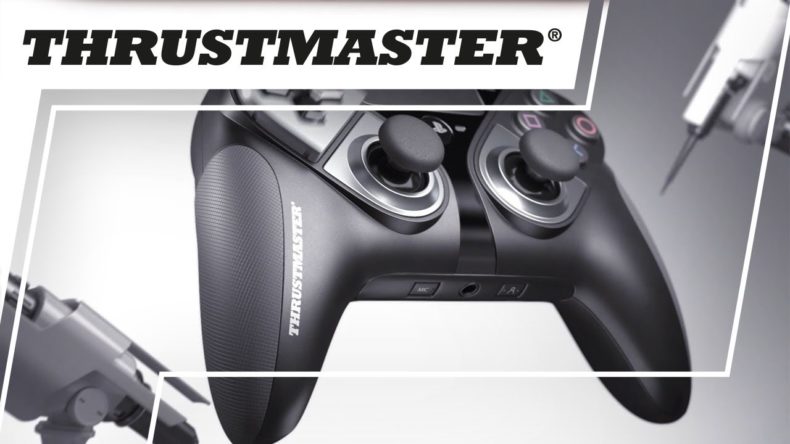 Having gone back to PC gaming just a year ago (after 12 years exclusively on consoles), I’ve spent the best part of 12 months retraining my brain to use mouse and keyboard. I’ve had mixed results, and find myself drifting back to controller when I get frustrated or, notably, with new games. But there’s something about the feel of a controller in my hands that’s oddly comforting, which has a lot to do with it. And despite the magic Sony have recently cast with the DualSense5, it’s that Xbox aesthetic that nestles more comfortably in my big old maulers.

So when I unpacked the Thrustmaster eSwap Pro X from it’s (very attractive) packaging, I was immediately impressed by how it felt in my hands. It’s large and smooth, with just enough roughage on each hand handgrip to ensure dedent purchase, and it’s weighty, too. What I was less impressed with was the appearance. Primarily black all over, the triggers, D-Pad and grips were gold, giving it the impression of something that had been “binged up” by an amateur designer. Had I bought it, that’s where I might have considered returning it just because it looked, well, cheap. 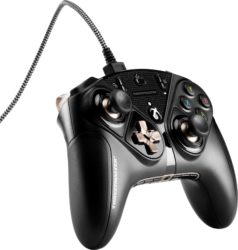 Thankfully, the eSwap Pro X’s primary selling point is that you can change all that in a few minutes. It arrived with a box of bits and pieces in metallic blue, with blue and grey camo in the handgrips. There’s even. Little screwdriver included so you can swap everything there and then out of the box. And it did take minutes, too. Of course I only had the one alternative, but theoretically you can purchase the extra sets and mix and match until your heart’s content. You could even have multiple analogue sticks or d-pads if that floats your boat. So aesthetically, I was happier, though I will say that younger gamers or those with smaller hands may have trouble.

This controller apes the Xbox pad in design, with extra buttons and turbo switches on the back and underside. These can all be programmed to suit your needs, though most gamers won’t need them. They’re a decent addition for eSports amateurs, and it’s nice to have extra buttons if you’re coming from a keyboard and want somewhere near that same accessibility in your hands, but for a large controller it neglects a lot of the real estate on the back side of the controller. The buttons there feel small and bunched up, and they’re very sensitive. It’s easy to catch one and perform an action you really didn’t want to, which is disappointing. 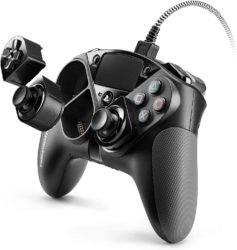 I tried the eSwap Pro X with my Xbox Series S and my PC (this model is designed to use with Xbox consoles) and found it to be mostly pretty good. I say mostly because I have a few issues with it. For a start it’s wired, which isn’t a major problem and the cord is long and supple, but swapping from a wireless to a wired controller always feels like a step back for some reason. Of far greater concern was the clickiness of the bumpers. I was hoping this was something that would fade with use, but after using it for a combine 50 hours across a variety of games such as Assassin’s Creed Valhalla and Gears 5, the problem persists. The other buttons have a similar mechanical click, but the bumpers seem more noticeable to me. Still, it could be a design decision that happens to clash with my personal preference.

What I can’t say for sure is how much difference it made to my performance. In Xbox there are few tweaks to be made – it is what it is, to a certain extent, and seemed to perform no differently to the proprietary pad. On PC there a more functions to play with using the Thrustmapper software, so you’re able to tailor the experience much more, but aside fine-tuning the vibration and look sensitivity, I haven’t needed to do much with it. The option is there if you need it though.

For £149 online, the Thrustmaster eSwap Pro X is an expensive proposition for a wired controller. Yes, it has a cool module-swapping feature, but I don’t see me or anyone doing this more than a few times a year, if at all. Additional buttons and the option to tweak functionality on PC are definite plusses, though, and there’s little here to disappoint – but if you shop around, you can find the features that really matter in less pricey alternatives.