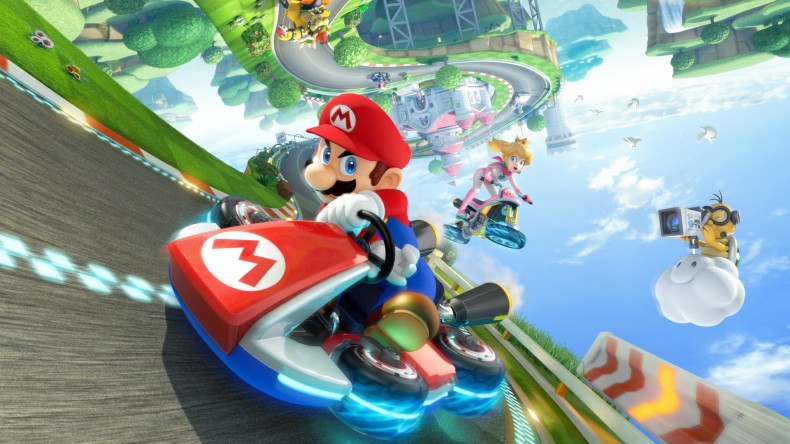 There’s something to be said for a game that just works, and is fun for just about anyone you could plonk in front of a controller. Because that’s what defines Mario Kart 8’s greatness: in a year that has, itself, been almost defined by the negatives, by the games that haven’t worked as advertised, or are glitchy and unfinished, Mario Kart 8 is the epitomy of what a video game should be.

Gloriously colourful (exactly as you’d expect from Nintendo), Mario Kart in HD is chock-full of secret visuals that you barely even see when in the fury of a frenetic race against friends, spouses, or your children that frequently smash you in every race. Every. Bloody. Race. And it’s that level of polish that put everyone else to shame. Touches that other developers wouldn’t even think of, they’re here in spades. The fact they could have gotten away with not bothering, yet they went the extra mile anyway? That’s a developer who loves their franchise dearly.

It’s also a game that, when considering titles for our game of the year awards, I had to go back and read my review and try to consider why I’d not given it full marks. On reflection, the battle mode is truly lazy. Whether or not you play it, or even care; it’s lazy. And it stands out so much because the rest of the game is anything but lazy. Plenty of tracks, lots of characters (some will always want more: where’s Birdo?), and lots of customisation options for the actual Karts (and bikes).

When I have an hour to spare, but I can’t decide what to play, Mario Kart 8 comes out. So undeniably playable, so irrepressibly charming; I find it impossible to believe any gamer wouldn’t fall in love with MK8 after just a few minutes. Mario Kart 8 has an essential understanding of tyre and track. Mario Kart Wii was like driving on ice, Mario Kart 7 lathered glue on the wheels, but Mario Kart 8 pops the denizens of the Mushroom Kingdom (and beyond) into actual chunky, weighty, bouncy go-karts.

It’s this sense of weight and tangible presence that imbues Mario Kart 8 with an arcade-like responsiveness and assuredness of control that elevates it above its kart-game sensibilities. Well, that and the outstanding presentation that is so complete in its interpretation of the Mushroom Kingdom that Mario Kart 8, the racing game Mario Kart 8, embarrasses Mario 3D World’s interpretation in many ways.

Then there’s the smart new weapons (actual good additions, which is a blessing after recent instalments), incredible new tracks, online tournaments and even the generous and surprising DLC. Mario Kart 8 would be a triumph as a racing game alone, but it’s also a smart re-construction of Mario Kart as the joyous arcade racer it started life as.

There are not many games that keep you playing six months after launch, but with Mario Kart 8 it’s hard to see when I will stop. Everything about it is simply perfect, from the challenge of the AI through to the layout of each track. Even the minutiae are excellent, the whoops of the characters and tinkles of items adding that extra sheen that is the Nintendo polish, all before you look at the drop dead gorgeous visuals. Mario Kart 8 is just so refined, how could anything else be our number one? I only picked up Mario Kart 8 around a month ago. At the same time I was trying to bash through the likes of Shadow of Mordor, CoD, Alien, Wolfenstein, and more in order to be ready for our GOTY podcast. I even made myself a schedule in order to finish everything, I’d have Mordor done by Tuesday, then finish CoD on Wednesday and move onto Alien over the weekend – but that schedule went out of the window as soon as I put Mario Kart 8 in my Wii U.

After completing my first Grand Prix and doing a quick race online, I knew MK8 would be atop of my list for GOTY. I really didn’t need to play it any more, but I did need to play everything else. However, the lure of sliding around Moo Moo Meadows was too tempting. I must have spent at least 15 hours playing MK8 over the last month, and 13 of those hours should probably have been spent playing other things, but yet I don’t regret a single second because I know I wouldn’t have had anywhere near as much fun playing Wolfenstein (sorry BJ) as I did with Mario Kart.

This was the game that brought local multiplayer back to my living room in a big way. My friends are a lazy bunch at the best of times, but when word got round that Mario Kart 8 was out, and that I had bought it, my living room was soon full of uninvited (but very welcome!) guests who were eager to check out the latest entry in the iconic kart racing series. Before Toad could even say “I’m the best!”, grown men were screaming at the top of their voices, laughter abounded, and the feeling that this title is something special swelled in the hearts of everyone in the room.

Mario Kart 8 is the best of the bunch, it is damn near perfect. It handles superbly, it’s well balanced, and to top it off it’s absolutely beautiful. That HD Super-Slow-Mo will never get old. Throw in a first class online offering, a first class DLC offering (price + content), and there you have it, my personal, and as it turns out, GodisaGeek’s pick for Game of the Year. This is the game that made the Wii U a must-own system in most gamers books, and thanks to the system’s relatively low price, and a back catalogue of top class first party games, buying a Wii U is almost a no brainer.

So there you have it

That’s our game of the year for 2014. Normally, I’d publish something like this and be sure we’d get comments from people disagreeing. But this year, I don’t have that fear. Mario Kart 8 is a shining beacon in a year that could have ended up being remembered for negativity. Instead, I’m going to pop this video below, of the DLC pack one, in 1080p, 60fps, and just say “come at us, we’ll be waiting on track”.