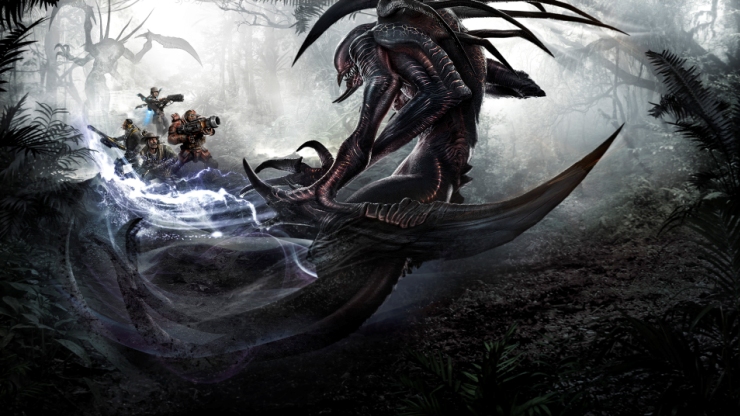 Although we love Evolve, we can’t help but feel there are certain things missing, the absence of which stops it short of true brilliance. We’re not talking balancing issues here, which will hopefully be sorted out with a patch or two, we’re talking gameplay elements that we wish were included in the finished product and might still be added down the line (fingers crossed).

While it’s an enjoyable, monster-bashing romp, few would argue that Evolve could do with a little more, well, things to do. Being the helpful sorts that we are, we’ve compiled a wee list of things we think would improve the overall experience. This one is purely cosmetic, but could make a huge difference to the way we connect with our player character. If you could adjust clothing, hair colour and loadout (a la XCOM), maybe with the option to decal your weaponry, most players would do it. A little tweaking of a character’s details can build a surprising bond between gamer and protagonist. With various skins already available, it wouldn’t take much of a push to introduce a little customisation.

There’s a moment in the game when you finish an Evacuation mission and the civilians escape the planet, and we’re treated to a little cutscene of the crew of the Laurie-Anne facing insurmountable odds side by side. It got us thinking: how cool would it be to line up with all 12 hunters in a huge Horde Mode, co-ordinating defences against wave after wave of monsters and minions?

Organised fireteams could defend choke-points while Medics flit around tending to the wounded and the Trappers used their various traps and snares to buy precious time for Lazarus to resurrect the dead, or Markov to lay more mines. It would be huge and frantic and awesome. Speaking of a Horde Mode, Evolve could use more game types, period. The potential for gameplay variety is massive, and only having a handful of modes – most of which aren’t even directly chosen at the menu – is a total waste. How about a Capture the Flag / Salvage mode where the Hunters have to collect power cells for defensive turrets and the monster and its minions have to stop them? Maybe a monster on monster ruck, or even an Escape mode where hunters just have to reach an evac ship blocked by a pair of monsters? Yeah. Cool, right?

No matter which way you slice it, Evolve is going to need more diversity if Turtle Rock want to see busy servers in 2 months’ time. We wouldn’t even mind seeing old modes borrowed from other games and “evolved” to suit this one – modes like Halo’s Crazy King (defending a constantly shifting target area), or a variation on a long-distance export mission. How about a mode where the hunters have to tag and survey specific wildlife, and the monster is there to harry them. Hell, we’d take anything after ten games of Hunt in a row.

Evolve has a loose concept that provides context to the hunting, but that’s all. It wouldn’t be too hard to create a proper story mode with different objective-based missions to follow, similar to Evacuation but with more modes and a continuous narrative thread. It doesn’t even have to be long, but it would cater to those who enjoy playing solo and like a bit of story to carry them through. The characters lend themselves to a deeper plot with their dialogue and personalities – each one is incredibly interesting, but undernourished to the point of frustration. A bit of action movie bombast would go a long way.

While we’re at it, a bit more variety in the looping dialogue, particularly in the dropship, wouldn’t go amiss. There’s only so many times you can hear Hank’s canyon eel story or Parnell talk about the mysterious Sunny saving the day at Basis Station. Finally, we need a glossary of some kind. I know codex entries are often lamented in 100-hour RPGs, but in a scifi universe as rich and unexplored as Evolve it would be invaluable. What’s CIG9, the organisation from which Medic Val is on loan? What happened at Basis Station? Is Maggie genetically engineered? What does Canyon Eel taste like? Teased tidbits are very great, but some of the things the Hunters allude to sound genuinely cool (dare we say, arguably cooler than what they’re doing on Shear), and we want to know more.

Also, the wildlife. Shear is bristling with alien species with cool names like “mammoth-bird”, “blitzleopard” and “river tyrant” – but aside a few lines on the load screens, there’s no further information. A codex would bring another dimension to Evolve’s wonderfully dark world.

So that’s our two pennys’ worth – but what about yours? What do you think would improve Turtle Rock’s shooter? Is it already perfect in your eyes, or beyond redemption? Let us know in the comments section below.

Senior Content Editor Mick has been playing games for over 30 years and writing about them for around 12. After drifting from site to site for a while, settling briefly at the now-defunct Made2Game and freelancing for the gone-but-not-forgotten NintendoGamer Magazine, he came at last to rest at Godisageek. Mick has been a reviewer, staff writer and content editor here for some time, while also moonlighting a little for Red Bull Games. He has 4 kids, has written 2 novels, and sometimes even manages to pay a bill or two. You'll usually find him defending the galaxy in Destiny 2, battling evil in Diablo 3, or lurking in the background on Twitter. Find him there @Jedi_Beats_Tank, or on XBL (JediWaster247), PSN (Jedi_Waster) or Nintendo (JediWaster).
MORE LIKE THIS
2k gamesEvolveTurtle Rock Studios