Hands on with Final Fantasy XV – From Duscae to Dawn 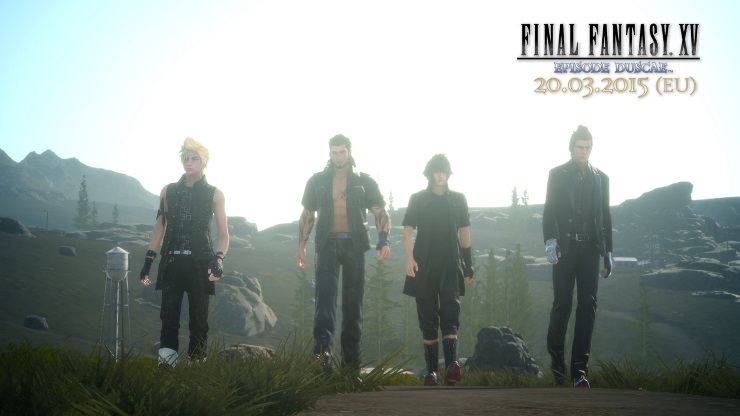 Final Fantasy Type-0 HD was released today, and I reckon it’s hardly been touched, as pre-order codes for the Final Fantasy XV Episode Duscae demo were unlocked at midnight. This will be the first properly numbered Final Fantasy since XIII (the MMOs don’t count in my opinion), but what does the demo tell us about the future of Final Fantasy as a franchise? Sqaure Enix’s dalliances with more action oriented elements in their games has been met with mixed feelings by fans as they try to change up their formula to encourage new fans to give their series a try.

There’s no real point in going on about the story here, as in the context of the demo it’s pretty much worthless. We join our heroes by the highway, their car has broken down and they need to raise the funds to afford its repair. It seems one of our number, Prompto (he with the Cloud-esque quiff) has broken the car by venturing onto unsuitable terrain. Along with us we have Ignis and Gladiolus. These two appear to be the brains and the brawn of the outfit, while protagonist Prince Noctis is just a brooding teen who just likes to fight alongside his mates.

Repairs to the car are going to cost a rather pricey 25k gil. Luckily, there happens to be a bounty on a rather ornery varmit named Dread Behemoth Deadeye that offers the exact amount. Result! I have my first quest! Once control is afforded to me I can see that the surrounding area is huge, it sprawls off in all directions and I’m free to investigate it all. Upon looking to my left I see a lake with a diplodocus sized animal drinking from it, it appears that the game didn’t want me to relax too much, as shortly afterwards I’m dropped into a battle tutorial. Downtime was over. Gladiolus is a bit of a man mountain, and here he’s my sparring partner. The tutorial is pretty extensive and not over with quickly, it needs to be as this is completely unlike any Final Fantasy game you’ve played before. It’s much more of an action-centric, to me it feels like Square Enix’s take on Dragon Age. Holding square makes has you continuously attack, while triangle activates special moves, and cross makes Noctis throw his sword and warp to where it ends up. Holding R1 allows you to lock onto a target, but this doesn’t guarantee camera focus, it only controls the direction of attack. While attacking, Noctis cycles through his weapons, each one materialising and dematerialising dependent of what part of his attack cycle he is on. It’s safe to say that these weapons will be changeable in the final version, but here in Episode Duscae new equipment and abilities are not present.

Dodging and using special abilities costs MP, and while special abilities are handy in dealing damage, dodging in a tight spot is even more precious. As such a constant eye on your pool of MP to make sure you have enough to get out of harm’s way is a necessity, abilities are expensive drains, whereas dodging isn’t. During battle, MP refills slowly, to recover it faster you will need to either take cover or find higher ground via warping. Both of these are hit and miss though, as not all areas are suitable for cover and only towers are considered high ground, a large rock or a tree unfortunately doesn’t count within the game’s logic. Once Gladiolus has decided our sparring session is over, it’s back onto the hunt for Deadeye. It doesn’t take long for me to get into my first taste of real battle as we are set upon by what looks like a pack of mutant greyhounds. Fights are no longer sectioned off, they take place within the world, so during the fight it is possible for you to encroach upon areas where other enemies are or for them to come to your location. On several occasions I went into battle against four enemies only to find myself having to take out numbers into double digits. Seriously, this is really only Final Fantasy by name.

Once the creatures are disposed of, I’m rewarded with my first real taste of XP, but…nothing happens. I sit in confusion for a while thinking that it’s all probably happening in the background. How wrong I was. It seems Square Enix have decided to change this up as well. XP isn’t awarded to you after a fight anymore, instead you receive it when you make camp at one of the designated map spots. Your team pitch a tent, and then the XP is dished out. Ignis then makes dinner for the party. What dish he chooses is random and affects what buffs you have going into the next day. All of this needs to be taken into account before you decide to embark on any sort of quest that seems like it might be dangerous, like, I don’t know, tackling a giant Behemoth. After our rest at the camp we decide to get back on the trail, following quest marker to quest marker taking out packs of creatures as we move around, until finally we find our way to Deadeye’s lair. There are some nice set pieces where they showcase just how monumental a task you have ahead of you to take Deadeye down. As you venture further and further into his den it grows foggier creating an atmosphere of trepidation. This unfortunately leads into an enforced stealth section, but at least it’s a good looking one. The shadow of Deadeye looms large ahead of you as you tail him through the dense fog – all the while I wonder to myself how we’re going to take him out. Inside this foggy ravine Deadeye has made a home for himself near a dilapidated building. Good thing too, as he’s massive and you need the space to play with. Regardless, you’re on to a loser. He has way too much health, and you and your compatriots can’t deal the damage needed to get him down. There’s only one thing for it, to run. He who fights and runs away…etc, etc.

A brief chat with the stable master at a nearby Chocobo ranch tips us off to a nearby cave that might be worthy of our attention. Grind or story, grind or story? At this point grinding doesn’t seem attractive to me, so off to the cave we go! The lengthy trudge through the cave is punctuated with fights against packs of thieving imps. At the bottom we come to a small area of lush greenery with a strange glowing object, naturally, we’re going to touch it and our reward is a summon (known here as an Astral Power). Looks like payback time for Deadeye.

Despite the extra levels gained since the last time we clashed it seems I am still no match for him. I do last longer, however, my abilities with the combat system have obviously improved, I’m dodging better and making better use of my MP to keep out of dangerous situations. Once again Deadeye rinses me and my health dwindles to zero. But it’s here the new summon system comes into play. ‘Hold (X) to Summon’ the prompt tells me. After what feels like an eternity, the sky grows grey and the wind starts to howl, a giant hand reaches down and grasps Noctis carrying him up into the heavens. It appears I am in Ramuh’s grip, and this is going to be a summon on a scale we’ve never seen before. Ramuh sends down his judgement bolt, but this is not a small thing anymore. Where in the past the summons would cast down their powers onto your enemies, the effect was just a little lacklustre. Well, now Square Enix has the power to convey this spectacle properly. The area explodes with destructive force, smoke billows outwards from the impact point and everything is set aflame. Deadeye’s health takes several 9999 hits and finally the big guy falls. Even once the summon is over the area is still engulfed in Ramuh’s effect, my mouth still hangs agape, I’m astounded by what I just witnessed. I can only hope that they keep up this level of quality for all the summons, because as a taster Ramuh is immense. It’s an excellent way to end the demo, as it really makes you want to see more.

A lot of people will revisit the demo here. As we’ve seen with these in the past, people like to push the boundaries. At this point you don’t have it in you to beat this giant foe, follow the storyline and you’re granted the power to dispose of it. However, I reckon we’ll see many people grinding the land for XP and trying to defeat Deadeye without the leg up Ramuh gives you. To me it’s more fun to watch Ramuh do his work, but people will always want to challenge themselves, and the game.

It’s hard to discern what the final product of Final Fantasy XV is going to be like just from this three hour snippet. The western trend of holding a button to attack and varying this with different presses for extra moves has seen Square Enix implement their own FF-type spin on it with MP rather than cooldown timers. It takes some getting used to, and the camera not moving with the lock on doesn’t help matters, but it’s a good take on a solid battle system. There’s some rough areas here and there. Textures and small detail pop in obtrusively, AI pathing can get annoying as you’ll find your AI partners blocking your path on occasions – you can’t just walk through them – and there’s some aliasing issues. But this is a demo; it’s early days, and the game is tentatively due for September this year. Considering the sheer polish that is normally a hallmark of Square titles, you don’t doubt that they’ll at least achieve a stunning looking product with some incredible spectacle.

This is probably the least Final Fantasy style title you’ll ever see the name given to in terms of play and structure. It’ll be interesting to see if they can apply their thinking to the Western style action RPG template, quest system and open world. You’d believe that their experiences with Final Fantasy’s XI and XIV and the experiments they did with XIII through to XIII-3 will put them in good stead to make something of this. Time will tell. Now, if you’ll excuse me, I’m going to go watch Ramuh unleash his Judgement Bolt again.

A lover, not a fighter and an all round good guy (he would say that, he wrote this after all), he's happy to be here as part of GIAG.
MORE LIKE THIS
Final FantasyFinal Fantasy XV 'Episode Duscae'square enix