Godzilla Hands-on Preview – For the Hardcore 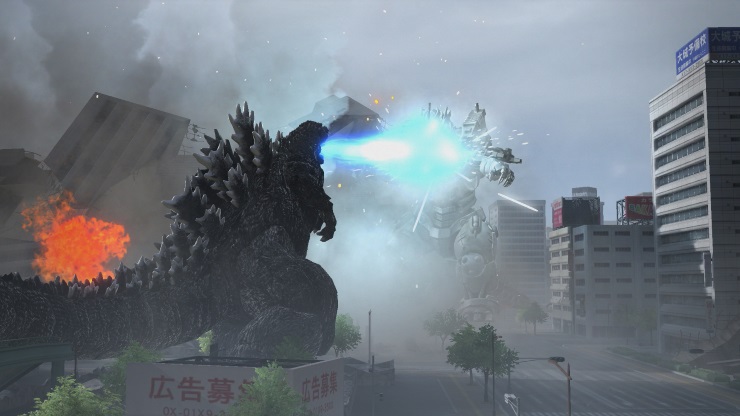 Godzilla promised a game to champion the beast it was named after: an action-packed thrill ride brimming with monsters, carnage, and destruction. Based on the Japanese incarnation of the monster, it seemed to desire a return to the roots – shrugging off lackluster movies and American remakes and focusing on Toho. Co’s string of Tokusatsu films as the main source material in order to create a powerful and dynamic in-game model.

Unfortunately, on this showing Godzilla doesn’t even come close to feeling next-gen – feeling more like a step back than anything else. Playing Godzilla on PlayStation 4 felt out of place, with its graphics, environment, and character control resembling a poorly-mapped and misguided PlayStation 2 title. Though a rather short preview level, Godzilla was underwhelming as much as it was disappointing. To be honest, you feel an immense sense of power as you tower over buildings and plow them down with a mere step forward – that is, until you take ten steps in one direction and reach the edge of the map. Tasked with destroying said buildings, you play as the titular beast throwing your tail around to raze the city to the ground. However, it’s hard to feel a sense of realism when the graphics are certainly not the best we’ve seen on the PS4. Whether it’s a deliberate attempt to play along with the cheesiness and Z-movie vibes that go along with Godzilla or just a lazy attempt at porting, it remains to be seen.

Monster-v-monster battles are sold as a main feature of the game, but fall flat, being totally uninspiring and with no innovation. With a short moves list that become tiresome very quickly, it’s easy to overpower the AI by working out their weaknesses and spamming your most powerful attack. With names like King Ghidorah and Space Godzilla (I laughed), you expect your rivals to be fearsome creatures that will show you a challenge. Unfortunately, this isn’t the case. The slow-moving Godzilla matches well with his movie concept, hardly being a beast with agility aplenty, but may leave some players frustrated and yearning for more freedom in combat. Godzilla seems a game for the die-hard fans. If you’re a long-time lover of the movies, Japanese daikaiju culture, or the creature itself, there’s a chance you’ll find something to like here. Whether it’s seeing an icon realised in his own video game world or feeling almighty when tearing down buildings and beasts alike, followers of the franchise will most likely get something out of it. However, be warned: if you’re seeking an action-packed title worthy of your hard-earned cash, I would perhaps look elsewhere. Bearing in mind I played through only one preview level – but also bearing in mind I feel like I got everything out of the game I could have in this one preview level – perhaps wait and judge for yourself.

Whether perceptions will change when the full game is released, it remains to be seen. I don’t exactly dread it coming out, but it also doesn’t excite. There clearly has been some kind of idea here that has been lost under a shroud of poorly thought out mechanics and development. I hope to see an improvement come release day, but that may be optimistic thinking.

Currently an English, Journalism and Creative Writing student at the University of Strathclyde. Based in Glasgow, I spend most of my free time playing video games ranging from Japanese visual novels to horror games. You can contact me at greg@godsiageek.com!
MORE LIKE THIS
Bandai NamcoGodzilla