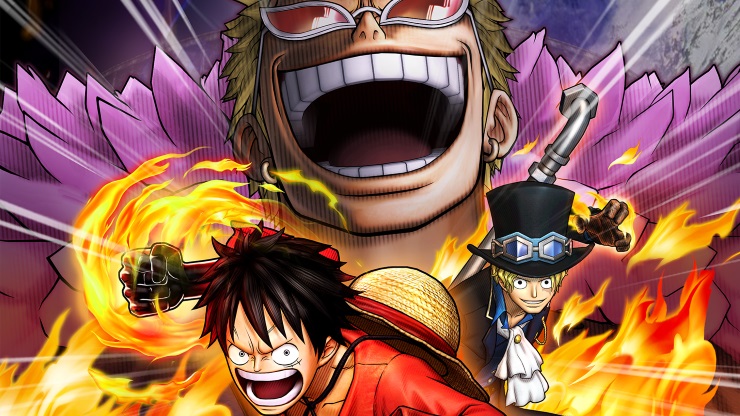 Omega Force, best known for their acclaimed Warriors series featuring titles such Dynasty Warriors and the recently released Hyrule Warriors, seem to have scored another victory with their latest release One Piece: Pirate Warriors 3. An explosion of colour, cartoon violence and characters aplenty. It knocks it out of the park in terms of enjoyment factor and has left me dying to play again.

The most exhilarating part is the fact that you don’t have a single freaking idea what the hell is happening, with the game involving mostly just smacking a load of enemies with the weirdest and most wonderful combos you’ve ever seen. The fact that the game was entirely in Japanese hardly abated my total confusion but instead made me enjoy it more, listening contently as my character uttered indecipherable phrases while racking up 500x combos. As far as plot goes, I didn’t catch a shred of it (if there even was one). I was too busy throwing henchmen across beaches, smacking blokes with my enormous balloon fist and button-mashing to take any notice. The objective of the game is (from what I gathered) to defeat all the enemies and reclaim zones of the island which have become over-run with henchmen. Combos are easy to carry out (I achieved most of mine by pressing buttons in any old random order) and are a criminal amount of fun, often resulting in 50+ enemies being hit at once and creating an absolute clusterfuck of a scenario on-screen.

The PS 4 version is beautiful, bursting with colour and taking cell-shaded graphics to the absolute maximum level. It feels surreal, seeing a cel-shaded game perform in 1080p/60fps and do a killer job at it. Going in, frame-rate issues were a concern for me, with having so much going on on-screen at once, but the PS4 effortlessly processes all the actions and keeps the game running silky smooth at all times. Despite having no idea what was going on the majority of the time, One Piece Pirate Warriors 3 was a refreshing and insanely entertaining title,, and I’m over the moon to have come across it. Despite its style in a market now obsessed with realism, One Piece is able to stand alone and succeed on its own merits, giving players a unique and mind-blowingly fun experience. I have read that there is a story, somewhere, which will most likely be easier to pick up when the game releases in English. Regardless, this acid trip of a game has hooked me and it’s almost certain I’ll be picking up it up when it releases this summer on PS4, PS3, PlayStation Vita, and for the first time ever, Steam.

Currently an English, Journalism and Creative Writing student at the University of Strathclyde. Based in Glasgow, I spend most of my free time playing video games ranging from Japanese visual novels to horror games. You can contact me at greg@godsiageek.com!
MORE LIKE THIS
Bandai NamcoOne Piece Pirate Warriors 3