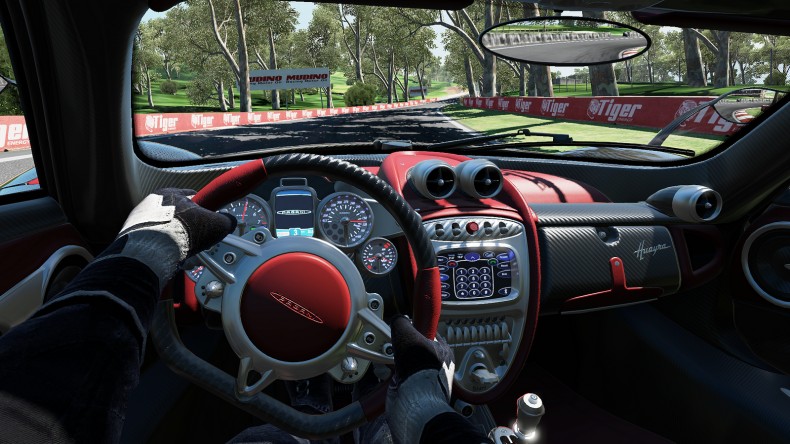 Editor’s note: We’re not quite ready to publish our final review of Project CARS, but we’re planning to do so later this week. However, having spent quite a bit of time with the preview build, we wanted to bring you some impressions from the final, retail PS4 version, as well as the videos from the PC version you see in this article.

Project CARS begins with a lie: “Project CARS is now tailored to you”, the announcer proclaims after you choose your previous experience with racing games. If it were truly tailored to me, I wouldn’t have spent the following hour and a half diving in and out of menus, adjusting the steering sensitivity, difficulty, and myriad other settings until I had it just right. It’s callous to complain though, as Slightly Mad Studios has created a true racing sim here, and the whole point is that you can tailor things to exactly how you want them. And when you do – however long that takes – you realise that Project CARS is pretty special.

The hours I’ve put into Project CARS so far have mostly been spent in the Career mode. There are various disciplines to enter into, and you can pick where to start. If you fancy working your way up, Karting is where you’ll begin, or you can commit to LM Proto Type 1 straight off the bat. It’s a nice touch that Slightly Mad have been keen from the start to let players get to the good stuff – but it can be a little overwhelming.

What happens on the track is where it really matters, though, and so far it’s a delight. Karts will turn on a sixpence, glued to the road right up until you stick a tyre on the grass, while GT3 racers will force you to deal with major understeer if you try to take a corner too fast. What’s impressive is that each type of car feels different, even if it is only subtle, meaning that as you progress in your career you’ll constantly be faced with a fresh challenge.

The A.I. lives up to the handling model. Racing sims on console have always felt a little dry when it comes to the actual on-track action – Gran Turismo I’m looking at you – but in Project CARS the computer will jostle for position going into a corner, as liable to making a mistake as you are, and defend their lines as you try to attack. Simply put: it is great fun.

That’s not to say Project CARS is easy though; in fact it can be brutal. Running off track will demand quick reactions to prevent a spin, while pushing too hard can cause your engine to blow, and with no rewind feature to undo your mistake these mistakes can prove costly. It doesn’t feel unfair though, because when you cock-up you know that its your own fault – it’s a Souls-game style of hardcore.

Design-wise, so far it holds up. At times it can be incredibly pretty, though at no point would you say it looks better than DriveClub. The menus (which you’ll spend a lot of time in) are the easy to navigate tiles that are all the rage at the moment, though they could perhaps be better presented.

Despite a recurring audio bug (after the applied day-one patch, though we didn’t notice this on the PC version) marring the experience, my first hours with Project CARS have been very promising. Setting up the experience until it’s what you want may take some time, but on this basis it’s well worth your time.

You can find me on Twitter and PSN as MacShanks, and feel free to hit me up if you have any questions, queries or feedback!
MORE LIKE THIS
Bandai NamcoProject CARSSlightly Mad Studios