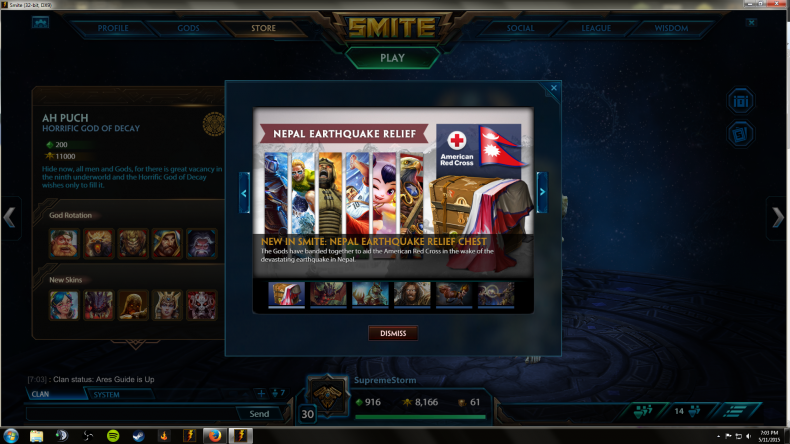 The developers of SMITE, Hi-Rez Studios, are planning to hold an in-game fundraising to aid those affected by the two Nepal earthquakes, the first being on April 25 and the second happening only this morning.

The fundraiser will be held in partnership with the American Red Cross, and players can donate to the cause by purchasing the in-game Nepal Earthquake Relief Chest. The chest will be available now until May 17 for 400 Gems, SMITE’s in-game currency. Players who purchase the chest will randomly receive one of the following six God skins for use in SMITE: Lucky Baby Fuwa (Cupid), The Sydney Shredder (He Bo), Orbital Strike (Rama), Jaguar Footballer (Xbalanque), Ra’Merica (Ra), and Soldier of Fortune (Ares). For every chest sold, Hi-Rez Studios will donate $2 to the international relief efforts of the American Red Cross.

In the past, the SMITE community has raised over $200,000 for the American Red Cross to help advance the charity’s widespread humanitarian mission.