previous
New Ant-Man Poster Released
random
next
Where is Xur, and what has he got this Week?
1 comment 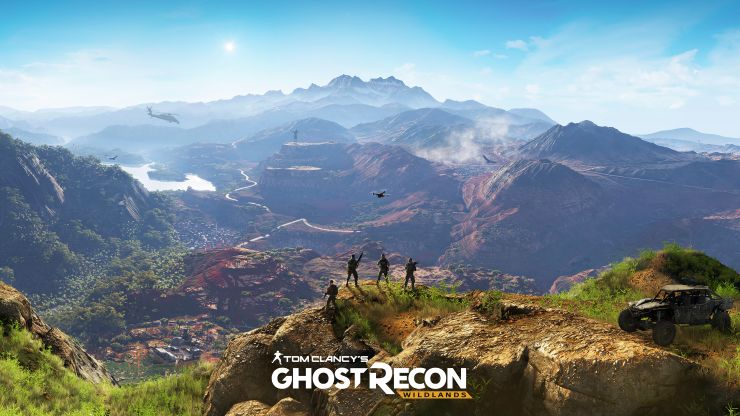 In a packed room within the massive Ubisoft booth at E3 this year I sat at a chair, put on some headphones, and watched four Ubisoft developers showcase the upcoming Ghost Recon Wildlands.

Wildlands takes place in Bolivia a few years from now when the country has somehow overtaken Columbia as the world’s number one producer of cocaine. Owing to its newfound cash crop, Narco terrorists quickly besiege the country and oppress its citizens. As members of the Ghost Recon team, players enter the open world of the game with the mission of taking the drug cartels down.

As the narrative implies, the open world of Wildlands takes place across the country of Bolivia. While the developers didn’t indicate the true size of the game, when at the top of a mountain or in a helicopter high in the sky, players can see for dozes of miles, suggesting the scope of the game is massive. It’s also quite diverse. There are mountains, lakes, salt flats, fields, towns, and cities strew across the map. In order to cover so much ground, Ubisoft has implemented four-player co-op, a core feature of the game. At any given time, players can work together or separately to accomplish mission objectives. For instance, in the demonstration one player subdued and interrogated an enemy in order to discover the location of a target. Meanwhile, the other three players were all busy exploring separate parts of the map searching for similar clues. Once one player gains intel, all players can then head toward the correct location and work together to accomplish the mission.

How players choose to travel from one area to another, and whether they do so alone or together is part of the fun. One player hijacked a pickup truck and barreled down a dusty road. Another player took a dirt bike off road. Another slinked through wheat fields. Eventually two players took to the sky in a helicopter. The combinations are staggering. Teamwork and coordination are key to accomplishing mission objectives quickly and cleanly. While the developers did say that the entirety of Wildlands is playable in single-player, I can’t imagine the game being as fun or as forgiving without three human allies there to plan and execute assaults.

With the target acquired, the four players converged on a small Bolivian town full of people living their daily lives under the cruel hand of the drug cartels. Each citizen reacts to the player in different ways depending on their allegiances. Some run. Some ignore you. Others might trigger alarms. Luckily, a street festival provided distraction during the demonstration, so the players were able to dispatch a few enemies and make their way to the target who was locked in a cage. Two players went in on foot to free the target and provide ground fire. The other players were in a helicopter above providing air support. Using this tactic, the four players easily took out the enemy forces and the ground-based players were able to throw the target in the trunk of a car and escape. This is just one of hundreds of possible scenarios. Any given mission can be approached in a unique fashion. Of course, most will probably all end in some kind of shoot out. At least, the demo didn’t highlight any purely stealth-based missions, although one has to assume the developers would accommodate this type of approach, though.

Even though it’s ultimately just another open world military shooter, Wildlands was impressive both from a visual and scenario standpoint. As long as you can muster up three friends, or don’t mind working with strangers, the game has a lot of potential. However, it will ultimately come down to whether or not the single-player is tenable or how diverse and unique the game’s missions prove to be.

A media scholar who also writes about video games for various outlets. He's interested in digital game production, media industries, residual media, and discourses around gender, race, and sexuality in media and production cultures.
MORE LIKE THIS
Ghost Recon WildlandsUbisoft