“Oh God, This is Good” – Hands-on with Star Wars: Battlefront 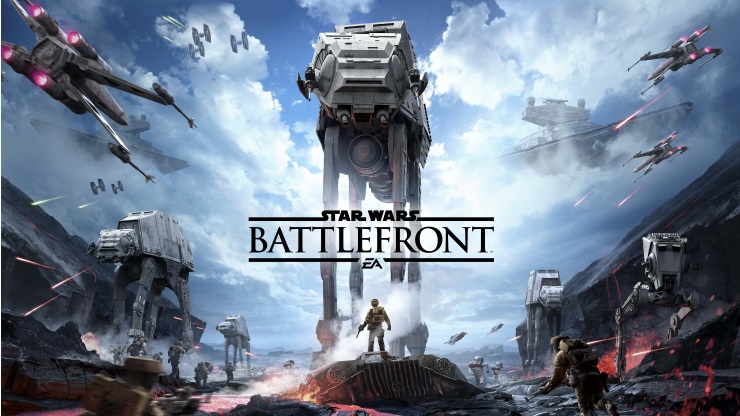 Oh god, this is good. Like really, really good. So good that standing in a line for near 40 minutes didn’t even sour the experience. Sure, it may not have all the features that Battlefront II had, but when you’re playing, actually shooting enemy storm troopers across the icy landscape of Hoth, you don’t care about any of that. All you care about is stopping those bloody AT-ATs, defeating the Empire and winning the match.

I suppose multiplayer is the thing you want to hear about most, so let’s start there. I played one match on the Walker Assault on Hoth map that was demoed at EA’s press conference. I was on the Rebel side, trying to destroy the AT-AT walkers that our opponents were trying to bring in. Things started out well: myself and a couple of others were easily picking off Storm Troopers from atop a small hill, while the rest of the team was engaged in fierce battles from the trenches. Our high-ground squad vantage point made sniping the enemy a joy.

The blaster rifle I was using felt incredible. Every shot had some force behind it, the sound effects were perfect and it looked badass. Reloading isn’t an issue, but overheating brings up a gauge that demands you hit Square in the yellow zone to quickly start shooting again. Almost like an active reload in Gears, time it right and you’re back to blasting the enemy within a second; mess it up and you’re out of the action for a terrifying stretch. I didn’t get a chance to try any vehicles or Heroes as they are pick-ups dotted around the map and someone always seemed to get there first. But seeing your team mates fly above your head as you’re lining up a shot on the ground is amazing – sure it’s not quite the space battles that many wanted, but it’s still a way of varying the gameplay. I don’t recall being killed specifically by any of the Heroes, but others have recanted tales of being killed by the likes of Skywalker while running across the map.

Having a game mode that wasn’t just “kill everything” or “capture this” was entertaining. Trying to find the best way of destroying the AT-ATs was a fun distraction to just shooting everything, although it became very hard to focus on the actual objective once the enemy Storm Troopers had us stuck in our spawn building.

I also got hands-on with one of the co-op missions, playing split-screen with one of the team. We were tasked with defeating six waves of enemies (this number was lowered for the demo) on Tatooine, which featured a mixture of standard Storm Troopers and the occasional AT-ST. The weapons here were the same as the multiplayer, although the jetpack was much more useful for navigating across the Tatooine terrain due to its incredibly varied height levels. As well as defeating the enemies, we were given sub-objectives on a couple of the waves where we had to defend a drop pod in order to gain a bonus. While these are apparently optional, they change the way you play and make things much more interesting. Suddenly, constant movement isn’t possible, so finding cover and taking careful shots is the key to success. The rewards they unlock also make defeating the later, more challenging, waves easier.

Speaking of the challenge, this mission was tough. I died at least three times, if not more, and my co-op buddy died once as well (I’m bad at games, okay!?). I did seem to be able to re-spawn with the tap of a button so I’m not entirely sure what the fail state is (or if it was changed for the demo) but this was a difficult mission. Fighting two or more enemies at close quarters is effectively suicide, as is taking on any large group without cover. Picking off one or two foes at a time seemed to work for us quite well, although the last wave proved tricky thanks to our positioning, as they all came up one hill and I forgot to use my grenade launcher.

Within 10 minutes all six waves were defeated, and I was left with two thoughts: Firstly, I have never seen any cinematic universe recreated so well in a game – all the art assets look just like they should, the environments perfectly match the brief shots we have seen in the films and everything feels as you would imagine it. Secondly, and perhaps most importantly, this was the game I had the most fun with at the show. The lack of content bemoaned during the reveal a few months ago had dampened my excitement for this a bit, but after getting a good chunk of hands-on time I am so hyped for Star Wars Battlefront that I could explode. November can’t come quick enough.

eSports! I joined God is a Geek all the way back in September 2013 and since then have spent most of my time on Dota 2, and occasionally posting the odd review, news article or totally wrong predictions for The International. When I am not playing Dota I can probably be seen watching some kind of strange eSport or begging for more Twitter followers (@MikeStubbsy if you are interested). Aside from GiaG I am a computing student, football coach and major Apple fanboy.
MORE LIKE THIS
diceEAStar Wars Battlefront