For Honor Preview – A New Idea 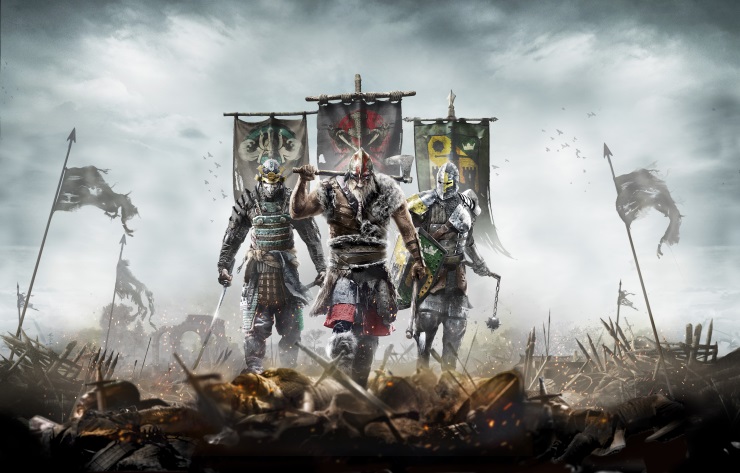 While Ghost Recon may have been Ubisoft’s traditional “game that looks amazing from the press conference demo but won’t launch for three years”, it was For Honour that impressed me the most when at their booth on the E3 show floor. Having missed the conference myself, I really didn’t know what to expect other than that it was a hack ‘n’ slash; but finding out it was a 4v4 competitive experience not too dissimilar to a MOBA totally caught me off guard.

A lengthy tutorial taught me the ropes before I jumped into a match. First up was the combat itself. Holding L2 will lock onto your target, and then actions such as light attacks, heavy attacks and dodges can be performed with the tap of a button (although you have to keep hold of L2). However, combat isn’t quite that simple: while ultimately you do just need to press a button to launch an attack, you have to hold your sword in one of three positions in order to land an attack. If your opponent is holding their weapon to the left, and you attack them from the left they will block the strike, which can potentially leave you venerable. But if you attack with your sword in the top or right position while they have their sword to the left the attack will land. This positioning system makes battles against other players very tactical. If I move my sword to an open position to try and land an attack there is always the chance they will attack first, or move quickly enough to block and counter attack. Obviously, being the initiator comes with a lot of risk, but most of the time I found it to be the best way; playing defensively for me at least didn’t work all that well. However, that doesn’t mean blocking is pointless, in fact it’s quite the opposite. Blocking was key to my success – if I started to lose a fight and I knew a teammate was nearby I would block as much as possible until they came over and helped (after I screamed at them over the mic) so that we could then be in a two vs one situation that gave the opponent little chance of survival.

After learning the basics of combat it was on to fighting against other players. The map was seemingly set just outside of a castle’s walls, with a surprising amount of verticality and bright colours. Three zones had to be captured (think Call of Duty’s Domination) by standing in the zone when no enemies were present. Capturing and holding zones, killing enemy players and killing enemy minions (weak, AI controlled bots, a bit like the creeps in Dota) all resulted in our team gaining points. Getting to 1000 points is the goal, but that doesn’t instantly result in a win, instead it “Breaks” your opponents, meaning they have no respawns and if they all die they will lose the game. But if they manage to get enough points during this time (I must admit, I’m not entirely sure what the exact criteria here was, it was all quite confusing) then their respawns come back, and the fight to 1000 points is on again. The match I played was actually quite close. We broke our opponents once but they managed to bring it back before a planned split push (communication really is important here), with two players heading to the A site and two heading to C, gave us enough points to break them. A couple of good fights later we tracked down their final knight and dealt the killing blow. It certainly wasn’t an easy victory, I died multiple times and there was one stage where the opponents had a good lead on us, but ultimately teamwork and planned strategy gave us the edge.

For Honor is certainly unique, it’s a new idea that has never really been done before and it works quite well. The combat with other players is the highlight, with battles being tactical and a lot slower than running round a corner and spraying someone with a machine gun, which was a nice change to what we are all used to. The game mode we played was simple enough (although some clarity on the breaking mechanic would be grand) and the map was well designed.

My worries are that the promised single player offering won’t be up to much and that a lack of content could become an issue; however, with the promise of Vikings and Samurais to come with the full game that concern could be unwarranted. For Honor was great fun for 20 minutes, but whether it can maintain those entertainment levels over multiple hours remains to be seen. eSports! I joined God is a Geek all the way back in September 2013 and since then have spent most of my time on Dota 2, and occasionally posting the odd review, news article or totally wrong predictions for The International. When I am not playing Dota I can probably be seen watching some kind of strange eSport or begging for more Twitter followers (@MikeStubbsy if you are interested). Aside from GiaG I am a computing student, football coach and major Apple fanboy.
MORE LIKE THIS
For HonorUbisoft