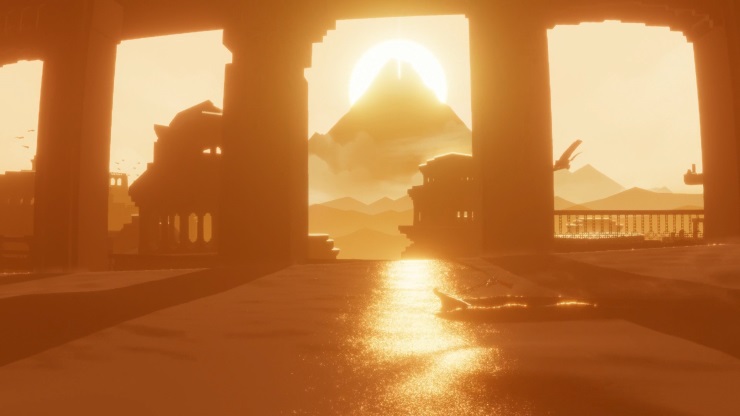 As I write this, the credits are still rolling and the music is yet to end. I feel as if I need to get all my thoughts written up in a coherent form while they’re still at the forefront of my mind, before I lose them to the ether.

I’ve known about this apparently amazing game for years, but without a PlayStation 3 playing it was impossible. Thankfully, it recently arrived on the PS4 and I’ve now been able to join the crowd and experience the game that stole so many hearts three years ago. Yes, “experience”; sorry about that, but it really is. Everything about Journey from beginning to end is masterly constructed. The intuitive controls allow you to seamlessly transist from soaring through the air to sliding down sand dunes to trudging on the uneven terrain, and it feels just oh so lovely. The glaring sun reflecting almost blindingly from the bronze sand, the swirling blizzards that chill your bones and the menacing, murky depths are all so beautiful and atmospheric. You could quite easily take a screen shot at any given moment and proudly hang the result on the wall in your home. And oh, the music. Each musical cue is timed to utter perfection to hit the exact note and reflect precisely what’s unfolding before your very eyes.

Yes I, like many others, absolutely loved my Journey.

Apart from when it suddenly, inexplicably turned into a horror game. Was not a fan of that in the slightest.

While the obvious connotations of overcoming hardship, embarking on perilous quests and impossible tasks but refusing to give in, came quickly to mind, as my little guy struggled up the mountain, I’ve come away from Journey with one resounding thought: why can’t all games be like Journey? Now, put down your pitchfork and hold on to that comment, at least just for a moment. I don’t mean that in the most literal of senses. I’m by absolutely no means suggesting that every game should be a short, emotional indie darling. I too love guns, explosions, epic fantasies, sword fights, tiny rocket cars attempting to play football and games that have a real competitive edge as much as anyone else. I’m talking more from the view point of online cooperation and friendliness.

Let me tell you a story that, if you’ve played Journey, will probably sound quite familiar.

I was aimlessly wandering around in the dessert, the harsh, relentless sun beating down on my back. I had very little idea of where the hell I was supposed to be going or how I was supposed to get there. Then out of nowhere (well, from behind a boulder randomly placed like a discarded child’s toy), appeared another traveler just like me. It gave me quite the fight at first; I wasn’t expecting it at all. But after a few seconds and an exchange of “beeps” and “bops”, we were travel companions.

This explorer was obviously a tired veteran of the path, as he instantly began to expertly guided me, leading the way to every glowing orb, every magical bridge and every (I presume) magic carpet. The journey probably took longer than he expected as I’m not the most knowledgeable of travelers, but that didn’t matter. Every time I stumbled, every time I missed a ledge, or simply lost my way because I just stood gawking at the vast, extraordinary scenery, my companion didn’t get annoyed. He didn’t scream obscene insults at me. He didn’t bring my mother’s honour into dispute. He didn’t leave me trembling where I stood, at the vulgarity and horridness of his sleight.

No, he just either sat their patiently waiting for me to rejoin him, or he came to my aid, helping me get to the hard to reach place and pulling my attention away from the never-ending horizon.

At one point we both reached a solitary tower that served as welcome respite to the seemingly infinite sand. I looked away, once more captivated by the stunning beauty of the landscape. When I returned, I thought I saw my companion turn to dust in front of my very eyes. I was lost. Where had he gone? Was he dead?

I was troubled, frantically scanning the area for any trace. When I’d just about given up, the unmistakeable sound of a “beep” echoed from below. He helped me. I helped him – a little bit. We worked together to achieve our goal. And then, when that leg of the pilgrimage had come to an end and he didn’t rejoin me on the other side of the blinding light, a deep sensation of longing sparked in the pit of my stomach.

His name was Tim, if memory serves.

Now, obviously, Journey has this distinct advantage in regards to wonderful online play. No one knows who the other person is whilst you’re playing, that’s only revealed once you’ve completed your journey. No one can speak using their actual voices either; your only means of communication are the aforementioned “beeps”, and the circle of light that accompanies them.

But that matters little in my eyes – so many other online gaming communities really could take inspiration from Journey and try to incorporate the ideas behind it into their own play.

If you’re playing some MOBA, and the person on your team who’s letting you down is clearly new to the game and is just trying it out, then please, don’t berate them, don’t criticise them and don’t make them feel worthless. What’s the point?

The person in question could have gone on to be the best ‘X’ MOBA player in the world, but you, with your big mouth antics and petty attitude, just because you weren’t winning one of the 6,783 games you’ve already played up to that point, put them off it for the rest of their lives.

So be nice to people, help them out, try and teach them the error of their ways so next time they succeed, not get stuck in a self-fulfilling prophecy of failure.

Be the tired veteran of the path.

Be the helpful explorer.

Aid someone else on their journey, because you never quite know their destination.