previous
Top 5 Games of the Past Decade
random
next
Metroid Dread: How to defeat the purple EMMI on Ferenia
0 comments 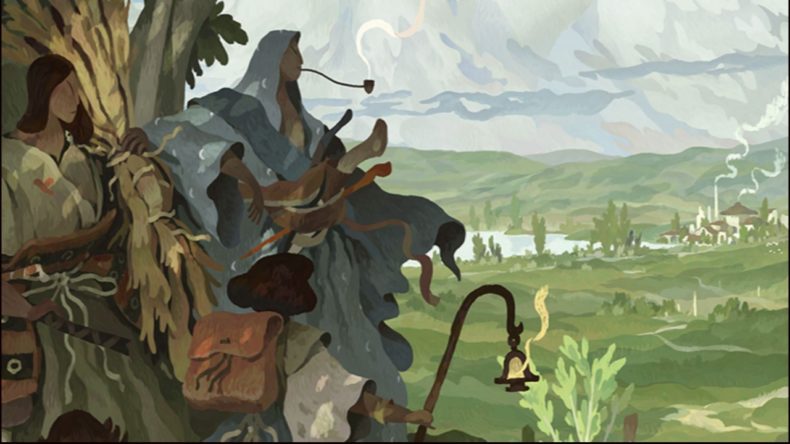 Book of Travels from Might and Delight AB is an ambitious title, and a perfect example of why some games release into early access before a full launch. Finding middle ground somewhere between PS3 classic, Journey, and a more traditional MMO.

You explore its beautiful, water-colour world as a solitary traveller. You’ll hike the length and breadth of the land, forming friendships and alliances, helping NPCs with their tasks and occasionally fighting for your life with blade and staff. But you’ll also fight the elements, as there’s a strong survival theme to Book of Travels, too.

Book of Travels: settlements and teahouses

As you venture out into the world you will come across settlements with stores and teahouses, soldiers and craftsmen and citizens. You can talk to most people but not all, though at the moment it seems a little arbitrary in some respects. For example you can chat to one guy lounging at the teahouse but not the fella next him. 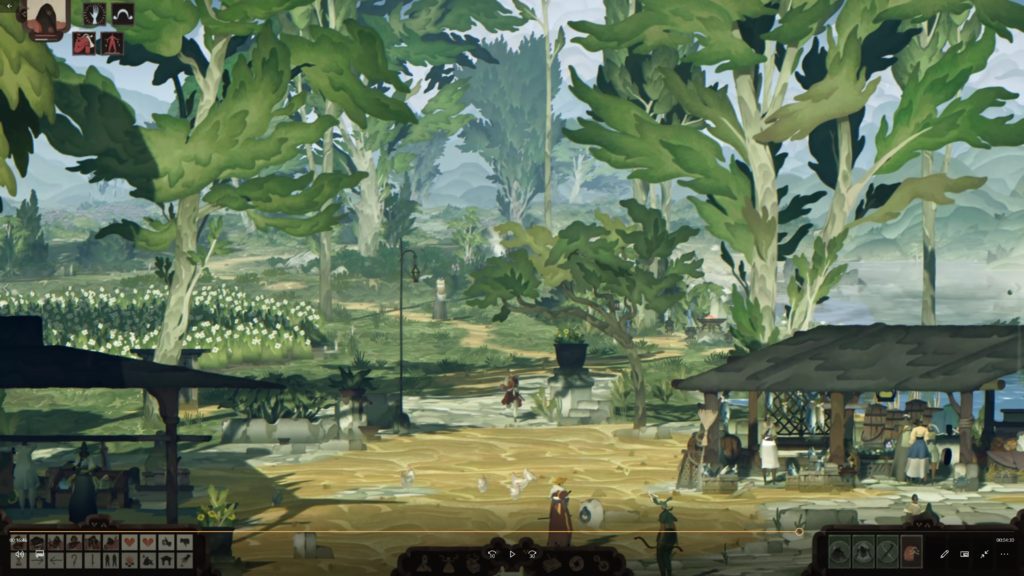 Sometimes you’ll find fishermen who need help pulling in their latest catch, or you’ll be asked to deliver missives and gifts between loved ones or guard stations. Travelling anywhere can be dangerous, and you’re required to provision accordingly for each journey. Without food you can’t heal, and although you can rest, specially brewed tea or prepared food gives bonuses to stamina.

The unique selling point of Book of Travels is something I’ve sadly been unable to test pre-launch. As with Journey, you can meet and team up with other players for periods of time. Not only does this give you someone to face the dangers with, but allows you to work together to complete feats too towering for a single traveler.

There’s a fairly extensive character creator with which to build you avatar. You can choose what they look like and even fill in a biography and history for them if you wish to take the role-playing to a higher level. Without voice chat you’ll be communicating with emotes and stickers, adding to the sense that you’re from very different places but working towards the same goal. 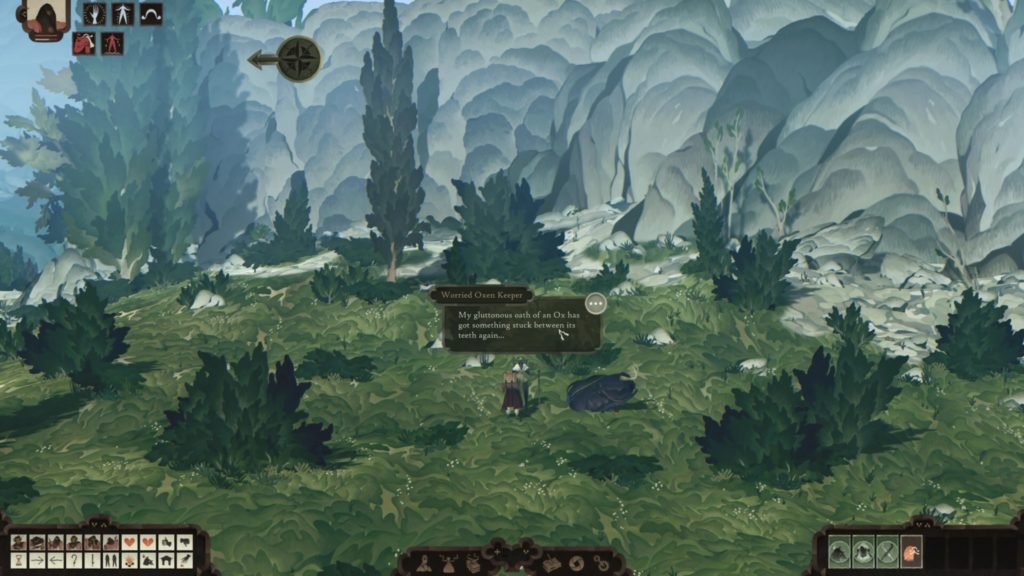 Perhaps the biggest issue with Book of Travels so far is that it’s incredibly slow. With no narrative to drive you, very little direction, no quest markers on the mostly useless world map, and little excitement to be found, it feels ponderous at times. I set out on a pilgrimage to a temple on the second island I visited, for example. I got fully set up with a new sword, plenty of food, and a new backpack, and marched for roughly five uneventful minutes before just sort of arriving there.

Not everything has to be a thrill ride, but something to make it feel worthwhile would be nice. There’re things to pick up everywhere, but little description of what they do even in the flavour text. And while you can level up and unlock new skills, this too is a slow process with little noticeable pay out – at least so far. And I gave up trying to find the person I was supposed to deliver a message to because I simply couldn’t find them or even check where I was supposed to look for them.

I don’t doubt that Book of Travels becomes more interesting with more people involved, but it still needs a little more actual gameplay if it’s to grip most people. Journey worked despite its minimal approach because you always had a clear idea of where you were going, and because it was such an effortlessly beautiful and naturally rewarding experience. At the moment Book of Travels is neither because I don’t feel compelled to explore its world. 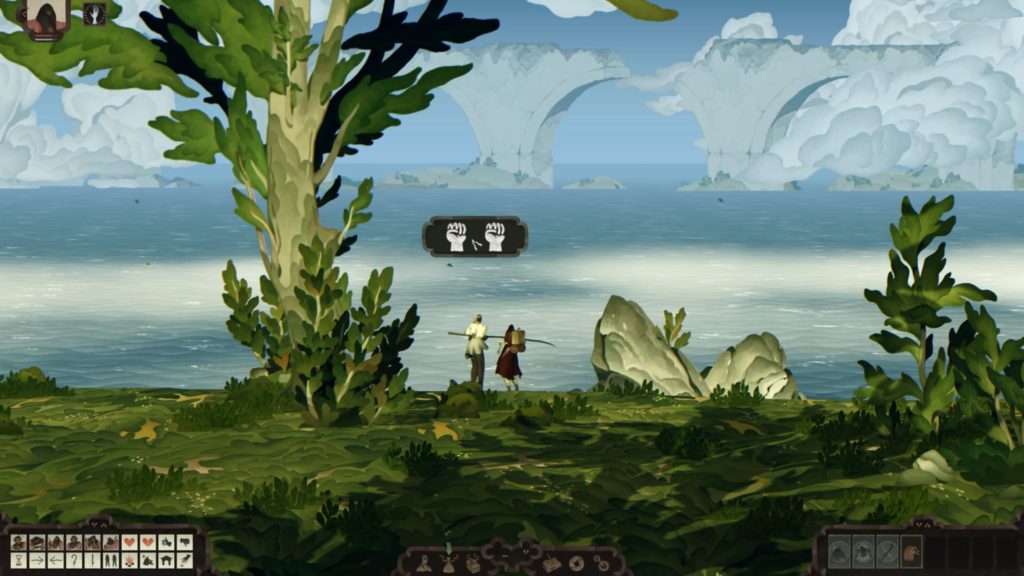 And yet there is a gorgeous landscape here to lose yourself in should you wish to. With a little more direction if not actual guidance, this could become something special. Having spent limited time with it before it’s even live in early access, I’ve yet to see exactly how interaction with other players alters the fundamentals of the game.

Right now I’m going to keep playing through Book of Travels in an attempt to find some form of gameplay rhythm. It’s undeniably stunning to look at and incredibly serene, but I’m hoping to find something that really hooks me in.

Book of Travels is in early access from October 11th on PC.

Senior Content Editor Mick has been playing games for over 30 years and writing about them for around 12. After drifting from site to site for a while, settling briefly at the now-defunct Made2Game and freelancing for the gone-but-not-forgotten NintendoGamer Magazine, he came at last to rest at Godisageek. Mick has been a reviewer, staff writer and content editor here for some time, while also moonlighting a little for Red Bull Games. He has 4 kids, has written 2 novels, and sometimes even manages to pay a bill or two. You'll usually find him defending the galaxy in Destiny 2, battling evil in Diablo 3, or lurking in the background on Twitter. Find him there @Jedi_Beats_Tank, or on XBL (JediWaster247), PSN (Jedi_Waster) or Nintendo (JediWaster).
MORE LIKE THIS
Early AccessJourney