Everything You Need to Know About the Rock Band 4 Hardware 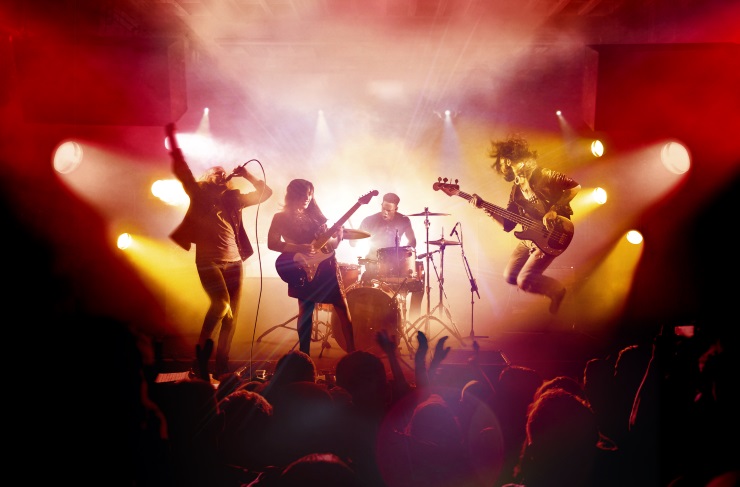 Back in March, after a five year absence, Harmonix announced that Rock Band 4 would be released by the end of the year. Fans of the game jumped for joy, threw a few devil signs in the air and stuck their tongues out like Gene Simmons in unison; Rock Band was back, and the prospect of new hardware was an incredibly exciting prospect. It was noticeable how much the genre had flooded the market, and all of the spin-offs, band specific games and portable tie-ins were getting too much — it was time to take things back to basics. Harmonix and Mad Catz had to look back at what made the game a success in the first place. There is one word that sums up everything that Rock Band is about and after seeing and playing with the new hardware first hand, I can safely say that they have absolutely nailed it; that word is “fun”, and Rock Band 4 is exactly that.

I was fortunate enough to visit the Mad Catz offices in Milton Keynes and play the game with the brand spanking new hardware. Not only did I get to spend time with the equipment, I got a chance to meet Mad Catz Senior Product Manager Richard Neville, and Global PR and Communications Director Alex Verrey. They had a lot of interesting things to say about the hardware that has been worked on. Backwards compatibility is totally a thing in Rock Band 4, and the sheer dedication in bringing it to the game is a testament to the hard work that Mad Catz has been doing. I can safely say that Rock Band 4 looks fantastic, but it is the hardware that impressed me the most, with the most realistic and intuitive rhythm–based units yet. When I say that Mad Catz had to start from scratch, I mean just that. After the disappointing sales of Rock Band 3, Harmonix had a lot of equipment that was gathering dust in the factory where the instruments were being produced. The steel moulds (known as ‘the tools’) that were being used to shape the plastic models for all of the instruments weren’t being used, meaning that rust was rendering them unusable. A whole host of new moulds had to be created for Rock Band 4, and the process started all over again.

Although this part of the development may have been rather tedious and frustrating, it did give the guys a chance to work on new designs that embodied the original, but included features that were necessary for the current gen. It also gave a chance to re-evaluate some of the less popular inclusions in the series, without “innovating for the sake of innovation,” something that Alex said was part of Harmonix’s ethos. Essentially, Mad Catz had the floor to work on the game with a new perspective. Five years is a long time in terms of technology evolving; Richard Neville and his team needed to build updated hardware that could connect with the current gen of consoles and also remain true to the original Rock Band experience. The drums feature a plethora of improvements. In the previous games, the drums only ever had six levels of sensitivity. No matter how hard you hit the cymbals or the drums, you would only ever get six responses: they simply didn’t have enough inputs to handle the information. Thanks to technological progression, this is no longer the case. “Everything is completely analogue – fully analogue – so the harder you hit the cymbals, the louder it’s going to be in the game,” said Alex, “there is a wider opportunity to express ourselves.”

One of the downfalls in the past was the bleeding of vibration into the game, meaning when you smashed either a drum or a cymbal, it would pick up a vibration on another input. To solve this issue, Mad Catz created its own program called “the drum tester” to make sure that the gamer could achieve a perfect score without inviting any unwanted vibrations into the game. “We tried different velocities, hitting every drum, trying every scenario to eradicate other hits, building an algorithm to fix this”, Richard went on to explain that hours of trouble shooting and countless drumming at different levels went in to fixing the issue, regardless of the repetitive and arduous nature of the task.

If you’ve ever owned one of the previous drum kits, excessive playing can dint the cymbals and the drum pad. “A lot of drummers by instinct will hit the same part of a drum pad again and again”, Alex also said that Mad Catz has “structurally reinforced the drum pad”, meaning no matter how many times the same part of the drum is struck over and over again, the kit will never get damaged by the drummers. In terms of design, the Fender Stratocaster is absolutely gorgeous. It has a slick, smooth exterior with a realistic wooden fret board that replicates the graceful shape and aesthetics of the model it is based on. It is worth noting that on day one, all guitars will be painted black, but certain outlets will be selling guitars with different colours as exclusives. In terms of the advancements to the hardware, there have been plenty of changes. The neck of the guitar has been structurally re-enforced, with some ribbing on the inside to “make it feel less like a toy and more like a real musical instrument”. In relation to Mad Catz wanting more realism in the way the guitar plays, “force activation technology” has been used for the fret board, meaning that when you are pressing the corresponding buttons on the guitar, there is more of a click which gives more acknowledgement that you’ve pressed the correct button. When playing, it is an obvious upgrade to previous models, and you can feel each press and are more aware when you make a mistake.

The tilt sensor has been improved through the use of a digital accelerometer. It uses the same technology as modern smartphones and the PS4 controllers to give precise movement when activating the overdrive feature. Mad Catz has used a reed switch/contactless switch for the strum-bar, mainly because they don’t wear out. There are other guitar-based games on the market that use a micro switch, but the problem with those is that they wear out after around 100,000 hits, meaning the more you play, the more likelihood you are going to be forking out for another guitar at some point.

The weight of the new microphones has been increased, making them feel more like real microphones. They are state of the art condenser mics, similar to the ones you would find in a recording studio, giving a sample rate of 96,000kh (as opposed to 250kh in the previous mics). Simply put, clipping is a thing of the past. They are more tolerant to you singing loudly or quietly, giving an accurate representation of the game. Alex Verrey showed a great amount of passion in his involvement, but none more so when explaining the phenomenal achievement of backwards compatibility that RB4 offers. It was interesting to learn how much effort went in to bringing this option in. “There were red lines when we sat down to discuss the project with Harmonix, and one of those red lines was backwards compatibility. They said they don’t want to force people into buying new hardware. That’s going to piss a lot of people off”. Now, if you want to use your old PlayStation hardware, you’ll just need to pop your dongle into it, and from there your old drums, guitars and mics will work the same as they did before. For the Xbox One, things are slightly more complex, and although Mad Catz has found a way to bring backwards compatibility to the Xbox One, it wasn’t easy.

The Legacy Game Controller Adapter “basically acts as a universal translator, translating all the inputs into Xbox One language and feeds that back to the Xbox One”. It will cost an additional £20, but it will allow all Xbox users a way to access all of their downloaded songs. Yes, it does add to the price, but without it, backwards compatibility would only be available to PlayStation users. Before a select few of you roll your eyes and tut in disgust, it is worth knowing that Mad Catz and Harmonix are making no profit on this device, and are selling it for what it costs to make. In terms of getting the old games to transfer the songs to your console’s hard drive, all you need to do is insert the game into the disk drive (whether it’s RB1, RB2, RB3, Green Day or Lego) and you’re away. The fluidity of play in Rock Band 4 is obvious, and whether you are playing on the drums or banging out a guitar solo, you are in full control. After sitting down to play some emo punk in the form of Paramore, I can safely say that drums are my now my preferred instrument. When you get it right, you feel like you are holding the band together. Percussion is vital to a cohesive band and when you hit the correct cymbal, drum, and pedal cues, you feel hugely satisfied. I did notice that different levels of impact affected the softness of the strike, meaning in quieter parts of the song, you needed to play with less gusto than in the louder segments.

My favourite moment of the day came in the form of lead guitar on “Tribute” by Tenacious D. I love the song so much, and getting to play on lead was an awesome feeling. One of the new features is the freestyle guitar solo. In certain parts of the song, you can enter into this mode and depending on what you press and how you interact with the buttons, you can make sure your solo sounds great. It is hard to make a solo sound bad, though, and I found that as long as you keep a rhythm that synced up to the main beat of the song, you won’t go far wrong. As the song reached its end, I let out a monster solo that made me feel like I was on top of the fucking world!

But if after all of this, you feel that Rock Band 4 isn’t for you, that’s fine, but you’d be making a big mistake on passing up on an opportunity to play what could be the greatest music rhythm-based game of all time.

Video games are cool. Don't let anybody tell you any different.
MORE LIKE THIS
HarmonixMad CatzRock BandRock Band 4