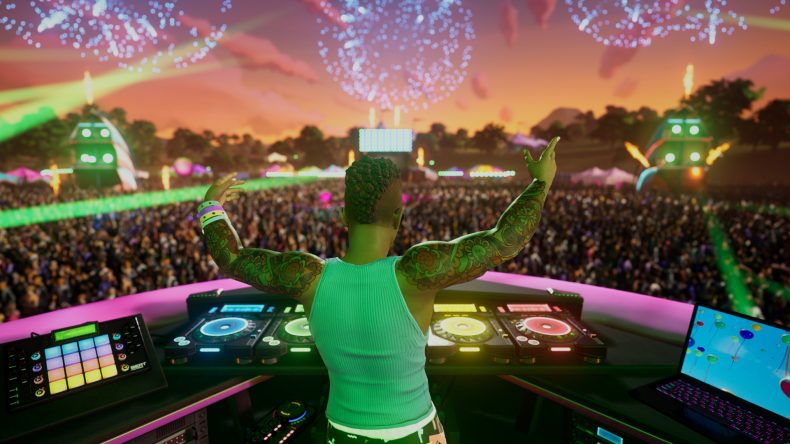 After ten years covering games in one form or another, it’s rare something takes me by surprise. That’s not to say there is zero innovation, because games like God of War (2018) or The Last of Us Part II push things forward in different ways from a production or narrative standpoint, but even those games have components that can be compared to genre-mates. That’s not the case with Fuser, the new game from Harmonix, arguably the kings of the rhythm game scene, and after playing it I can’t recall a time I came away from a game having had my mood so entirely lifted in the way Fuser did.

When I last spoke to Harmonix, it was just before Rock Band 4 was announced. Five years have passed and the company has dabbled in VR (Rock Band VR, Dance Central), board games (DropMix), and more, yet Fuser somehow feels like the most ambitious games it’s ever attempted. Even on a visual scale, Fuser feels more grandiose. This is a game about performing festival sets, with enormous crowds, pyrotechnics, and visual effects displayed on your backing screens that mirror your personality and your performance. It’s a remarkably customisable game, and the team are keen to stress that gender isn’t important to how you present your avatar. You have male or female physique types, but the customisation side of Fuser is about presenting whatever personality you want to, and whether that results in outlandish colourful clothing and dyed hair with tattoos for days, or a bland workmanlike outfit, it’s up to you, and nobody is judging you for that. It both matters, and doesn’t, and that’s a rather wonderful ideal.

And if you asked me for a single word to describe Fuser, it’d be “creativity”. The aforementioned festival crowd will beg for favourites from your deck of songs, while mini challenges will appear as you play, timed in order to put you under the maximum level of pressure. But as with any Harmonix music game, you can ignore it and be happy with a two-star rating if you want: that choice again, then. But what is it? Well, it’s a game that is far easier to show than tell, but essentially you’re presented with four slots to drop music into. You’ve a pre-selected (by you) deck of songs that range from Call me Maybe to Rock the Casbah (no, seriously) and all have been meticulously selected and pitch shifted so that whatever key you’re in, they work. You start by dropping either a drum beat, a vocal, a bassline, guitar, or keys section and the crowd starts bumping. Let’s say you’ve dropped the drums from Bad Guy by Billie Eilish in, then you drop the guitars from Don’t Fear the Reaper; then the vocals from Coldplay’s Clocks, and finally the bass from X Gon’ Give it to Ya. These are all shifted accordingly so they work together as one compelling, no, brilliant song.

Above your four disc-shaped slots you have a bar that helps you get maximum points. The larger lines define a “drop” which is the ideal time to drop in a new stem or seed from a different track. These are all colour coded to match the controller (on an Xbox One/360 pad, anyway) meaning you’re never getting too confused about what to do or when. But the sheer creativity means you don’t have to do anything you don’t want to. The challenges that appear boost your score, and you’ve a meter that tells you the crowd reaction, informing you of whether you’re switching songs too often, or not enough. What’s most telling is I couldn’t tell you how long a single set goes for. It’s so utterly compelling that I lost myself every time, just nodding along to the beat I created. Even then, if that sounds like enough, there’s more: you have a built in synth pad to create your own drum beats, saw-synths, and all manner of loops, and these can be dropped in when you’re ready. Challenges are varied and range from having two pop songs included in your mix, or a country vocal; maybe all four tracks are drums: there’s enough here to mean no set ever sounds the same, and there’s a freestyle mode so you can do whatever you want in there, anyway.

Fuser made me feel unbridled joy. It’s complex, there’s no mistaking that, and that ties back into how this is Harmonix’s most large scale project, design wise. It feels like it’s shake up the genre needs, and it feels fresh and unique and, despite early misgivings about the style of music skewing towards genres I’m not into, my own prejudices against the songs gave way to euphoria, so much so that I was devastated I couldn’t just play through the (seemingly large) campaign mode right now, from start to finish.

I can honestly say it’s been a while since I played a game that I just came away from with zero criticisms from, and sure, I played and saw a small slice of what the game will have to offer, but right now I’ve gone from barely being aware of Fuser, to it being one of my most wanted titles of the year. It’s out on PS4, Xbox One, PC, and Switch later this year, and I cannot wait.

Editor-in-Chief here at GodisaGeek, I organise almost every bit of content as well as running our weekly Podcast, and being the lead producer on our YouTube Channel. That means I'm very busy and sometimes grumpy. Yay!
MORE LIKE THIS
FuserHarmonixNCsoft