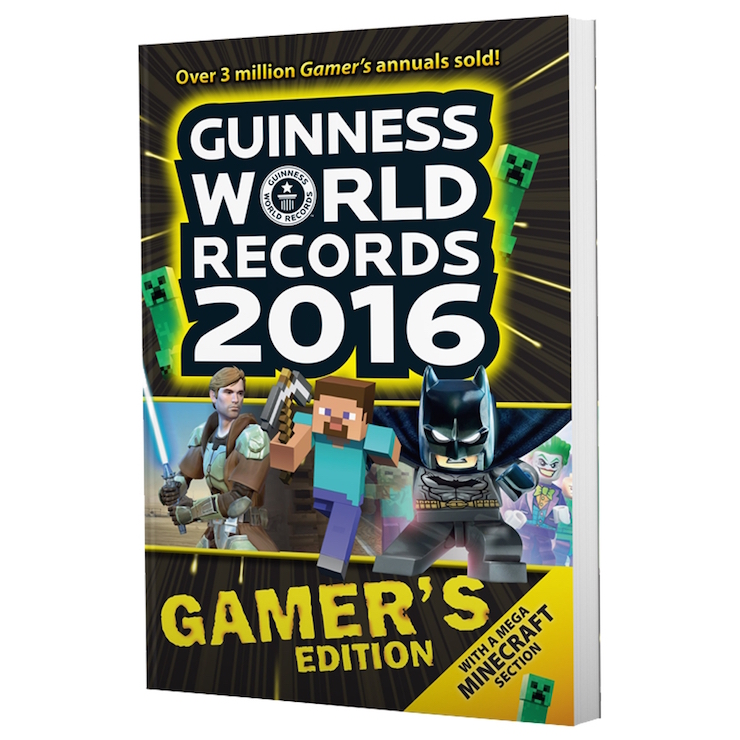 The Guinness World Records Gamer’s Edition 2016 will launch September 10, it has been announced. The ninth edition of the gaming annual contains a 22 page Minecraft section, as well a records set in titles both old and new.

I got my hands on an early copy, and I must say it’s full of some really interesting gaming titbits I never knew (Crash Bandicoot was almost called Willie the Wombat), along with records that don’t seem physically possible. It looks pretty good on your coffee table too.

Here are a few of my favourites:

Longest marathon in a soccer game

Chris Cook (not related to our Adam) played FIFA 15 for a staggering 48 hours 49 minutes and 41 seconds to raise money for SpecialEffect. Unsurprisingly he had lost the feeling in his hands by the end.

On September 23, 2014, the Ordnance Survey released a map of mainland Britain based on real data. The map represents 224,000 km² and required 83 billion blocks, each representing 25m².

At 99, The Legend of Zelda: The Ocarina of Time has the highest videogame rating on Metacritic, ahead of GTA IV, Soul Caliber and Tony Hawks Pro Skater 2 which are all on 98.

As part of the European launch of Skylanders: Trap Team, Activsion hired a groups of skydivers to play the game in freefall at 12,500 ft. How they didn’t lose the little figures is beyond me.

You can find me on Twitter and PSN as MacShanks, and feel free to hit me up if you have any questions, queries or feedback!
MORE LIKE THIS
Minecraft