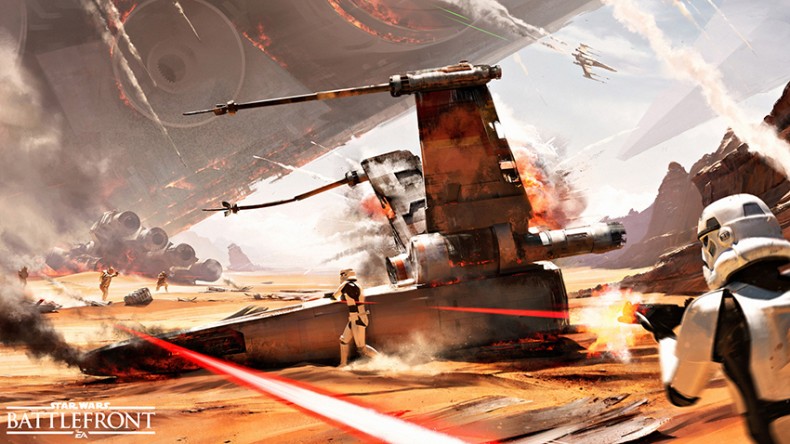 I’ve been enjoying DICE’s Star Wars: Battlefront an awful lot these past few days. So far I have clocked up about 25 hours, hit level 27, unlocked all the guns, worked out my favourite cards and traits, have a 50/50 win/loss ratio and a wildly fluctuating k/d depending on the game mode and whether I feel invincible that day. I’ve entered the battlefield as Vader, crushing enemy throats and deflecting their laser beams back at them with my lightsaber, jet-packed in as Boba Fett for a short-lived reign of fiery terror, supplied my troops as Princess Leia Organa and shouted “Great shot, kid!” as Han Solo. I’ve piloted X-Wings and TIE Fighters, and shot down Slave 1 while flying the Millennium Falcon with Chewy’s “Arrrrggghh!” bellowing in my earphones. It’s magic. I’m loving every second of it.

Critics have been fairly consistent in their comments on it, with most agreeing that is a beautiful homage to the source material, with particular nods to the sound design and art direction. A few have been exceedingly negative about it, criticising the lack of single player mode, and some even using it as an opportunity to pen a polemic about consumerism. But all of that, in my opinion, is complete toss in the face of the utter childhood joy I am experiencing with it.

It’s not easy for me to explain why I like it so much. I am not oblivious to the fact that I’m a huge Star Wars fan, and the visual and auditory representation of that universe makes me want to scream with joy. It is pure escapism. To any 10 year old kid growing up on these movies, it is the ultimate fantasy to pilot the Millennium Falcon in a dogfight above the stark, frozen beauty of the ice planet Hoth, or run through the trees of the lush forest moon of Endor. It’s a love letter to nostalgia, and to the feelings that Star Wars has given me during my years on this planet, and I am very, very happy with it. That being said, I can agree that most criticisms of it have been pretty fair. Players are getting stuck on each other in corridors whilst the enemy throws endless grenades in at them. The unlock system is pretty sparse, with very few weapons to collect and experiment with, vehicle handling is at times a little fiddly, there aren’t that many maps supplied (although the number provided is on a par with other shooters released recently), and gameplay isn’t as deep as other shooters on the market, but is that really such a bad thing?

By far the over-arching criticism I am seeing about Star Wars: Battlefront is that it’s all just so… casual. It seems that casual is a dirty, dirty word in some quarters, but why is that? Is it such a terrible thing that the game is accessible to those players who don’t have hours to devote to a game, levelling up to get better weapons so that they can “pwn the nubcats” all day long? The fact that the there are only a dozen or so weapons, all of which are fairly equal in terms of usability seems perfectly reasonable to me if you consider that Battlefront is a game that is, by design, only meant to be enjoyed in small chunks. Most shooters on the market gate the better weapons behind hours upon hours of levelling up so that only the most dedicated can access them, but Battlefront doesn’t do that. I’ve been using the first blaster pistol you unlock almost exclusively throughout my time with the game, and let me tell you, I can still hold more than my own with that pistol despite unlocking the arguably “better” DL-44 pistol.

Sure, I think some of the weapons have balancing issues; the Shock Blaster CA-87 has outrageous range on it, and that coupled with the high damage makes it a fearsome weapon on the smaller, more tightly-packed maps, but to counter that, I don’t see many players actually opting to use it. I have, but only because I had a challenge associated with it – it isn’t my go to weapon of choice. Criticism has also been levelled at the vehicle controls. Personally, I’m grateful that these are so accessible. Plonk me into any game where you have to shoot stuff to win and I will be there, leading the vanguard, put me in a vehicle and I will likely crash it within a few seconds. The fact that the controls are so simple for Star Wars: Battlefront is perfect for me as I can now live my dream of being a top gun TIE fighter pilot, the scourge of the Rebellion.

Where I think fair criticism should be made at Star Wars: Battlefront is the lack of maps for the blue ribbon modes, Walker Assault and Supremacy. Only four shipped, or five if you count The Battle for Jakku, is a little sparse and I would rather have seen more in the core game than held back for the inevitable DLC schedule. It’s a shame, but Star Wars: Battlefront isn’t the only game guilty of it in today’s marketplace, and it is perhaps unfair to single it out above others.

I guess, in conclusion, Star Wars: Battlefront is by no means a perfect video game, and the question of longevity in an overly crowded playground remains to be seen; however, what DICE has done with it should be, in my opinion, applauded. It’s a pitch-perfect representation of the well-beloved Star Wars with simple, accessible gameplay for anybody to be able excel at, not just those who have hours upon hours to dedicate to becoming the best, and in my mind that’s a good thing. The fact that I get to crouch under a Jawa Sandcrawler as a rebel fighter with laser fire coming in from all directions, while dreading the slow, inexorable progress of an AT-AT in the distance is the stuff of dreams.

Likes to shoot stuff and wear pretty shoes. Is a BEAST at Titanfall.
MORE LIKE THIS
diceEAgoty2015Star Wars Battlefront