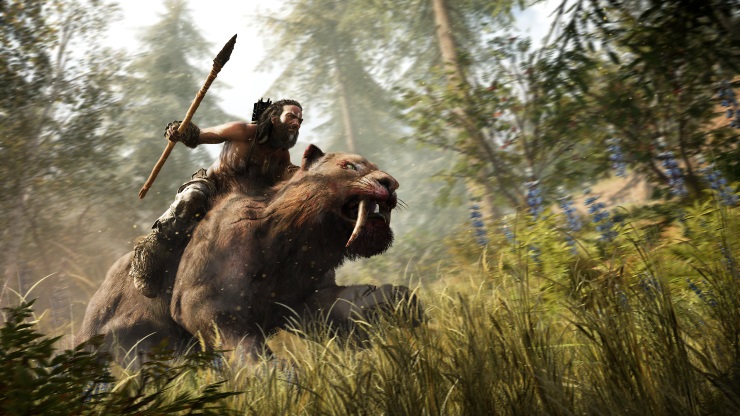 There I am, stalking a few of the rival tribe having a chat at the Roaring Falls bonfire. I need to get in there, claim it for the Wenja, and if I pick up a few of their supplies on the way; happy days. With my trusty beast by my side, this should go off without a hitch. The moment to strike comes and I order my companion to dispose of one of them, while I nail the other with an arrow – one which doesn’t do its job as well as I’d hoped. Not to worry, I rush toward him and take him down with a knife. When their third compadre shows up, he doesn’t stand a chance. Now, for the easy bit: light the bonfire in the name of my people. After seeing what I can only describe as the smoldering remains of where a blaze once was, I ignite one of my arrows and turn up the heat. I was foolish, though, and didn’t properly take in my surroundings. If I had, I would’ve seen that the bonfire was actually a bit away from the camp and not be currently in the middle of a forest fire that won’t let up.

Moments like these are what make Far Cry great. Even from just an hour of playtime it’s easy to get the sense that the world of Primal keeps going when you’re not there. On occasion, I found myself resting on a hilltop, watching a saber-toothed tiger and a brown bear battle for supremacy below me, or a spear-wielding caveman run for his life from a woolly mammoth. In this primitive era, it’s kill or be killed, and it’s very easy to feel like that doesn’t change if Takkar isn’t present. Like the the video game embodiment of Khal Drogo from Game of Thrones, Takkar is a handsome, rugged bastard and the protagonist of Far Cry Primal. Having seen none of the story in this limited window, I can’t attest to Ubisoft’s character-building on this occasion, although his Doolittle-like powers are cool as shit. Far Cry 4 had its problems, but one of the most glaring issues were the Shangri-La missions. All of the badass weapons that you had accrued over the course of the game were gone, but it was fine because you were left with the best superhero power of them all: pointing. This dreaded finger poke of doom would direct a white tiger toward an enemy and rip him to pieces. That awful-on-its-own mechanic has actually found its place in Primal. Hunting animals for their flesh or pelt is still very much the aim when it comes to upgrades, but you can now tame certain predators to do your bidding. Wolves, jaguars, and even honey badgers are just a few of the creatures that attack whatever you so wish, when called upon.

Sadly, you can’t have an army of stone-cold killer pets with you at all times, but having one member of the animal kingdom on hand is a sufficient help in taking down outposts, or dealing with a marauding mammoth. If they get into a tussle with an ox and their health is low, giving them a bit of meat will see them fighting fit again. However, if a leopard gets the better of your cave lion, you can revive your fallen buddy. Wonderfully, this doesn’t include holding a memorial service for the recently departed at the site of their demise, but merely opening a menu with the press of a button and using a leaf from an apparently really potent plant, whenever you want.

You also have friends in high places, though, as you can call upon an owl to survey an area from the sky. Unlike your ground-based buddy, you assume control of this flying beast. While controlling the owl, you can tag bad guys, or animals below, as well as send your wolf (for example) to a certain area to mercilessly murder an unsuspecting target. This owl has a bit of a mean streak in him too, so if you want to swoop in and attack a mammal, that’s perfectly acceptable – encouraged, even. This new vantage point would break Primal entirely, if it wasn’t for the fact that you can only fly around a certain radius relative to Takkar’s location, and I noticed that after going in for a kill as the bird, I couldn’t regain control of him again for about forty seconds. There’s potential that it might lessen the difficulty of outposts, or similar, but in my limited time, I enjoyed overlooking the mesolithic landscape.

With this being the Stone Age, you’re not packing anything like an AK-47, or a sniper rifle for long-range efforts. You’re required to rely on melee and projectile-based weapons, which is a massive change for the series. The club is a satisfying choice when thwacking adversaries in the skull, and the spear is a decent way to incapacitate a bear, without getting too close for comfort. Although, our old friend, the crossbow, is recommended as the all-purpose option. With regular arrows, it becomes a way to ping headshots from generous distance, but if you ignite the top of your wooden bolt, it’s possible to take down the most imposing of creatures. Through your collated resources, you can naturally create more arrows for your bow, or spears for your foes, but clubs are also degradable. It should be noted that in my time with the game, I had enough in my inventory to replace fired arrows and spears, and my club collection didn’t deplete enough to the point where I was using my fists rather than a chunky tree trunk. Starting off, I did have a generous supply, so it’s difficult to determine the effects of weapons that wear.

The few side quests I played were your standard, open-world fare: kill seven boars that are breaking my tribe’s huts, infiltrate a cave and kill the leader of a group – the sort of thing you expect. We’ve seen a few titles in this calendar year that have treated side quests with a bit more care and it would be welcome if the finished product doesn’t fall into the trap of rinsing and repeating. With that said, the aforementioned mission in the cave was great fun. I might as well have been a DC superhero, my crossbow skills were so on point. As is always the case, though, shit hit the fan after about four clean kills and it descended into chaos. However, while it’s plentiful when it comes beasts, it feels bereft of humanity. Outside of the optional side-quests, I can count the number of NPCs I saw on one hand. Of course, this needs to be rectified once Primal reaches the general public.

Those magical moments still occur – I had about four in the space of an hour. It was great fun travelling around this wooded area that feels more inviting than Kyrat. There are improvements to be made before late February, definitely, but I’d be lying if I said I didn’t want to stay in this world for a while longer. I wanted to tame a sabre-tooth, I wanted to clear another outpost, I wanted to ride another mammoth and head-butt a wolf, while shooting a tapir square in the face with an arrow.

Oh...and it's pronounced, "Cull-um".
MORE LIKE THIS
far cry primalUbisoft