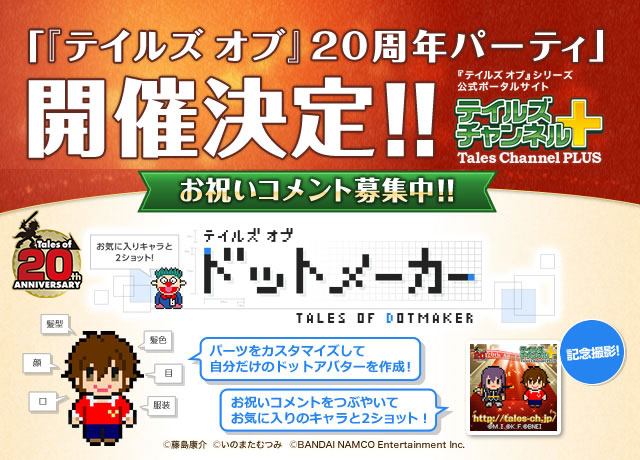 Bandai Namco Entertainment have announced that they will be hosting a Tales of Anniversary live stream on December 14 to celebrate the series twenty years of titles.

The stream will take place on Niconico at 22:00 JST (13:00 GMT / 05:00 PST / 08:00 EST) and will feature cast members such as Katsuyuki Konishi (Tales of Symphonia’s Lloyd Irving), Suzuki Chihiro (Tales of The Abyss’ Luke von Fabre) and Tsubasa Yonaga (Tales of Xillia’s Jude Mathis).

The stream will feature an in-depth look back at the Tales of series, as well as asking fans what they would like to see on the channel and the latest information on the series upcoming release, Tales of Berseria.

Currently an English, Journalism and Creative Writing student at the University of Strathclyde. Based in Glasgow, I spend most of my free time playing video games ranging from Japanese visual novels to horror games. You can contact me at greg@godsiageek.com!
MORE LIKE THIS
AnniversaryBandai NamcolivestreamTales of