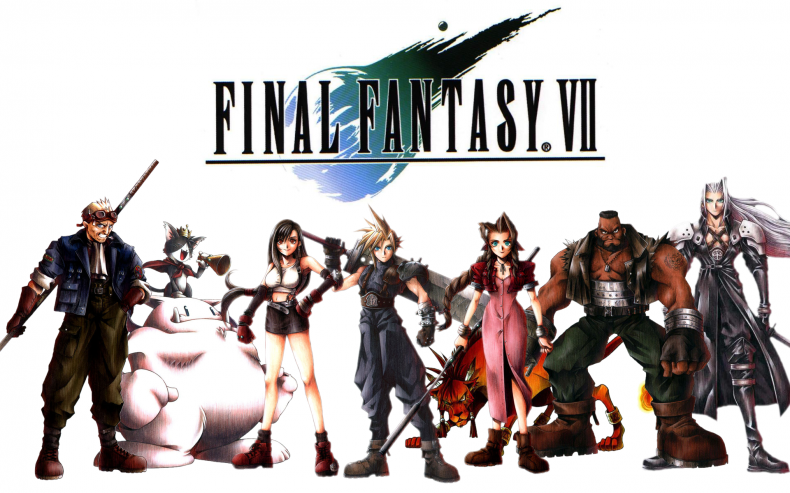 Everyone knows Final Fantasy VII. It was the game that brought JRPGs to the attention of mainstream gaming in the West, thanks in part to Sony’s already successful PlayStation console. Ask anyone which game is the best in the series and you can guarantee that VII will be somewhere near the top of the list, if not right at the very top. Twenty years have passed since Final Fantasy VII released in Japan (it arrived in Europe later the same year, in November) and it really speaks volumes of its quality, that it is still thought of by many as one of the greatest games ever made.

I didn’t play it straight away, thanks to being a broke teenager and also being knee deep in other games at the time. I also didn’t think it’d be worth my time, seeing as I had no real attention span at that age. But a friend invited me over one day after school, the PlayStation was soon booted up and Final Fantasy VII was the game of choice. We played a good portion of the opening section, the AVALANCHE assault on Shinra’s Mako reactor, and I was hooked. Soon afterwards, another friend and I had each picked up shiny, new copies of Final Fantasy VII. That opening few hours is just as spectacular now as it was back then. The intense escape scenes and Cloud’s eventual fall into the slums of Midgar, resulting in him meeting one of gaming’s most iconic characters: Aeris Gainsborough, the unassuming flower girl. Except she’s much more than that, something that Shinra is eager to exploit when they capture her later. But the time you spend with Aeris is very different to the rest of the early game, helping to develop both her character and the relationship between her and Cloud, in a much calmer environment.

Games rarely do a proper love story, and those that do are often terribly written or just awkward (save for a few examples) but Cloud’s love triangle with Aeris and Tifa, his friend and fellow AVALANCHE member, is handled wonderfully – even if it’s a tale tinged with tragedy. There’s a certain charm to the whole thing, especially with the chibi-like character models and exaggerated animations, and you really start to feel Cloud’s connection to both women.

Every main character in Final Fantasy VII is memorable, especially the likes of Barret and Yuffie, Red XIII and Vincent, who even got his own spin-off game on PS2. Arguably the biggest character was Sephiroth, with his long, silver hair and impossibly long sword (not a euphemism, he literally had a massively long sword…wait, maybe he was actually compensating for something after all, now that I think about it). He quickly became one of gaming’s biggest and best villains, with the playable flashback in Nibelheim being one of the most memorable (and incredible!) sections of any videogame. The revelations within are astounding, and who doesn’t have the image of Sephiroth walking through the flaming wreckage of Nibelheim, permanently engraved in their mind? Hell, I had that image as my PC desktop wallpaper for months. It’s not all about the story, though. Final Fantasy VII, as I said earlier, was the first JRPG to really break the Western market, and it brought with it the fantastic Active Time Battle system. This turn-based fighting was new to me at the time, but was so simple to grasp for a blunt object such as myself, used to wading into battle like Leeroy Jenkins. Not that there wasn’t depth to the battle system, but Squaresoft (now Square-Enix) managed to make it easy enough to understand, that even I could learn how use the correct Materia against certain enemy types. Until it came to bosses, of course, then it was simply time for me to spam Summons as much as possible. Bahamut and Shiva were particular favourites.

Summons were superb showcase events and have become a staple of the series, particularly in the PSOne games. Upon gaining the required Summon Materia, I would instantly want to use them in the next fight, regardless of the enemy. I felt sorry for the weedy little nobody that was melted into oblivion by Bahamut’s breath. That’s actually a lie, I was too busy shouting and cheering at the magnificent visual effects and the ridiculous demonstration of power. I was a young teenager, gawping at the stunning technological marvels that Final Fantasy VII continually dished out. Each and every Summon was a masterclass in visual spectacle.

Then there were the CG cut-scenes, back when CDs first allowed proper, animated movies to be merged into games using Full Motion Video, creating moments that just weren’t possible using the in-game visuals at the time. The Weapon attack on Junon was a particular highlight, or when the Weapons first awaken, each scenes of epic proportions that simply astounded my teenage self, in much the same way Final Fantasy XV’s visuals might astound my current self, if I ever get around to playing it. The Nibelheim scene was much more effective thanks to FMV, and then there was the shock of *that* Aeris scene, that just would not have had the same impact if it had taken place in-engine, with the cute, cartoony character models. Back in 1997 and 1998, there were very few discussions in my school (well, at least in my nerdy little social circle) that didn’t involve Final Fantasy in some way, shape or form. It was the type of game that became a social event, almost turning the single player RPG into a multiplayer game in my case. The friend I mentioned earlier, the one who bought the game at the same time as I did, lived up the road from me and we realised that we could play the game together. So we did. We played it separately, but we’d discuss the game in detail and whenever one of us visited the other, we always had our own Memory Card to hand, so we could continue playing. This way, we would copy saves and could play sections together, periodically handing over the controller to each other. Once, we got stuck on a boss for days, a giant scorpion if I remember correctly, only for me to go away one night and try it myself. I beat it on the first try, and was eager to tell my friend the next day – only to discover that he did the same! There was a strange mixture of pride and disappointment, as I was happy that we both beat it, but part of me had wanted to be the “hero” of that particular boss battle. Yes, I know how sad that sounds. No, I don’t care.

We played through the majority of the game together, all the way to the ending. You should have seen the scenes when that Omnislash happened. His family had even begun to watch us play the game at that point, and they looked on as the two teenaged boys jumped up and down like the pair of idiots we were. All because we had finished a videogame. But that’s just the kind of hold that Final Fantasy VII had over us. The kind of hold that no other Final Fantasy has had over me since.