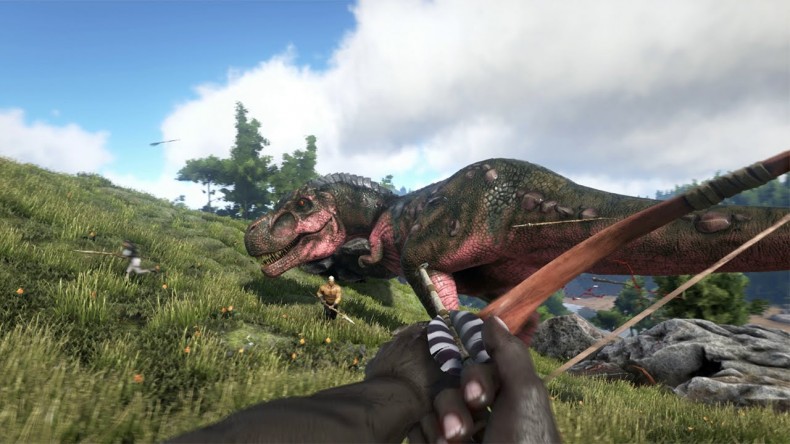 Ark: Survival Evolved doesn’t believe in holding your hand. It doesn’t even believe in pointing you in vaguely the right direction. In fact, it would be happy if you spent your entire time sitting on a freezing beach, gently rocking back and forth while eating rotten berries.

But here at God is a geek, we’ve got your back. I don’t want you to get eaten by a pack of carnivores, trampled by a Triceratops or poisoned by a foot-long mozzie like I did. I certainly don’t want you to freeze and starve until you’ve at least experienced the maddening, desperate sense of not-having-a-clue-wtf-is-going-on at which Ark excels in providing, which I also did.

So to this end, I have assembled nine beginner’s tips to get you through the first few nights with all your limbs still stuck on. Enjoy.

If it isn’t nailed down…

Grab it. Although Ark: Survival looks markedly different, it’s essentially in the same vein as Klei’s Don’t Starve. You begin with nothing, and if you want to avoid ending up on the toothpick of some gigantic beast or another, you’ll need to scavenge everything you can, from stones and plant fibre to wood and thatch. You’ll need wood and stone to make a pick axe, with which you can find flint, with which you can create weapons, torches and campfires. Since it’s essential to clothe yourself and stay warm, harvesting these things is of the utmost importance. Also, despite the fact that you wake up on the beach in nothing but a pair of tightie-whities (and a wraparound bra, if you’re a lass), you can carry a surprising amount of rocks and sticks.

Or you’ll freeze. While I haven’t tested the effects of prolonged exposure to the elements, freezing to death is obviously filed in the “Things to Avoid” category. It has a negative effect on your survival efficiency, for a start, and will eventually take a more serious toll. The first and most effective way to stave off Jack Frost is to build a fire, which requires rocks, wood and flint – and then a fuel. Thatch and woodwork best, and the more you add to the pyre, the longer it will burn. Clothing yourself helps, too, but you can’t beat a nice warm fire on the beach. It’s also good for keeping predators away.

Fairly common sense this. Eating is a fairly important requirement for day-to-day life, so the fact that you’ve washed up/crash landed on a mysterious prehistoric island really shouldn’t impede that. Sadly, to begin with, your choices are limited to various berries. Each fruit has different properties in terms of nutrition, but you can’t cook them or do much bar eat them and hope they don’t go through you too quickly. Later on, you can go spear-fishing, grow vegetables and, of course, harvest juicy cuts of meat from the indigenous population. That said, hunting takes weapons, skill, and a healthy dose of courage. It’s better at first to simply prey on fish who won’t bite or attack you. Just remember, food spoils if you don’t eat it quick, and meat has to be cooked if you don’t want to experience any complications. Oh, and always be aware that you aren’t top of the food chain here. Careless hunters find themselves hunted, and you can’t win many one-on-one fights with the bigger critters. Beware of the wildlife

Again, fairly obvious. The majority of starting zones don’t drop you straight in at the deep end, but I’ve met a grizzly end more than once in the first 20 minutes by either charging off too quickly or simple bad luck. Occasionally, you’ll wander upon a pack of carnivores or a paleolithic ape-man who wants to cave your head in, and it’s best not to rile up the locals too much. Later you’ll come across much larger predators and, while you will hopefully be better equipped by then, it’s still not worth rushing in recklessly. I also found that sometimes it’s best to simply keep your distance: some animals are initially docile but will attack if you get too close. Oh, and it’s not just the big stuff – giant mosquitoes and other insects are an utter terror. Not only can they be frustratingly hard to hit, they can also poison you. There’s no bug-spray on the island, so watch your step.

After you’ve made some natty cloth threads and fashioned some basic tools, the next job is to build yourself a shelter to protect you from the elements and the nasty beasties. Everything you do earns you XP, and each time you level up you’ll not only be able to improve your base stats, you’ll also earn points to spend on “engrams”. These are like schematics which, once learned, allow you to create items from scavenged resources. Among the early engrams you’ll find wooden foundations and thatch walls, which you create in the Craftable Items menu and then place in the world. A decent shelter can be the difference between life and death at times, but be careful: other people can and will make themselves at home if you don’t secure the place with a lockable door. Later, blueprints allow you to build without having to unlock the corresponding engram, which is very handy.

See those big beams of light that seem to be pouring down from the sky? Those are supply nodes. Yup, someone is watching you and wants you to survive. Periodically, they’ll drop supply caches containing tools and materials, but you can only use them if you’re the right level. Handily, they’re colour-coded as follows: white or rainbow-coloured for Level 3; green for Level 15; blue for 25; indigo for Level 35; golden yellow for 45; and red, for Level 60 to end-game. Be aware of your level, and don’t waste your time with anything above your weight. Be brave and explore

Now I’ve told you how dangerous the world of Ark: Survival is, it’s time to give you the best piece of advice possible: ignore my warnings and get out there. The island is huge and full of mystery, whether you’re forging ahead into the undergrowth, exploring that sparkling funnel of light in the distance or simply prodding at a dinosaur’s arse with a spear to see what happens. You can take fall damage so be careful where cliffs are concerned, and you can drown, so be sensible, but ultimately the island is a playground full of big, scaly toys, a toolbox full of bits and bobs to build a dino-riding, spear-fishing, T-Rex-slaying badass. You just need to be brave and take a risk now and then. You can sit on the beach and eat berries for all eternity if you want to, but you won’t have an awful lot of fun if you do. Sleeping bags, cooked meat and weapons are very handy for long expeditions, and try not to get lost too far from your base.

Tame yourself a buddy

Yes, you can eventually learn to tame almost anything once you’ve killed one and have unlocked the required skill. In the harsh environments of Ark: Survival, a companion can be essential, but they require their own level of upkeep. As well as managing your own vitals, you’ll also need to maintain the health and mood of your pet to ensure that they remain combat effective, don’t tire too easily while you’re loading them up with rocks, and can stay awake listening to your boring campfire stories. Ok, the last one is rubbish, but you still have to look after them. You’ll also find that other players will opt to give you a wider berth once you’ve got one or more animal companions, which is essential if you want to get from A to B without someone rocking up to spoil your fun. Bare in mind though, it takes some serious prep to tame anything worthwhile, with huge ingredient lists and a lot of luck. Always be prepared to fail, which may well result in being eaten. That lass perched on the back of a dino with a big grin on her face in the promo art didn’t get there by accident.

Finally, don’t be afraid to work with other survivors. In a PvP server you’re more likely to encounter people who just want to watch your world burn, but in the PvE and mixed rooms you’ll find a lot of folk who are happy to help, share a campfire or tackle a particularly angry giant lizard with you. Not everyone wants to kill you, although I’m not advocating blind trust either. Keep your guard up, have your wits about you, and always be prepared to fight if you have to. Alternatively, jump into a solo game instead – just be aware that Ark: Survival Evolved is not really designed for soloists (despite the premise lending itself to exactly that), and lone rangers will find it incredibly hard from time to time.

Senior Content Editor Mick has been playing games for over 30 years and writing about them for around 12. After drifting from site to site for a while, settling briefly at the now-defunct Made2Game and freelancing for the gone-but-not-forgotten NintendoGamer Magazine, he came at last to rest at Godisageek. Mick has been a reviewer, staff writer and content editor here for some time, while also moonlighting a little for Red Bull Games. He has 4 kids, has written 2 novels, and sometimes even manages to pay a bill or two. You'll usually find him defending the galaxy in Destiny 2, battling evil in Diablo 3, or lurking in the background on Twitter. Find him there @Jedi_Beats_Tank, or on XBL (JediWaster247), PSN (Jedi_Waster) or Nintendo (JediWaster).
MORE LIKE THIS
ARK: Survival EvolvedGuideStudio Wildcard