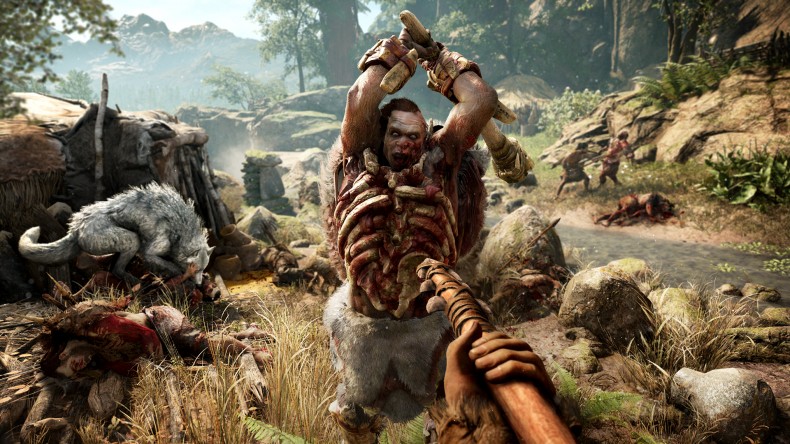 It was only after playing Far Cry Primal for a good few hours that I realised why 10,000BC is the perfect setting for the series: there are no guns. While Far Cry 3 and 4 were brilliant (lets not mention 2, okay) my biggest issue with both of them was the unsatisfying gun play, which resulted in me getting the bow as soon as possible and almost exclusively using that. But when you remove the guns entirely and force everyone to use the bow (along with a big ass club and spears; because why not) it feels great, as everything is designed to be killed with what is undoubtedly the best weapon in the entire series.

Now I’ve said my piece about why the bow is amazing, we can get down to the real reason why we are here, to talk about Far Cry Primal’s story. Obviously being set before the English language was a thing, and before there was any real civilisation, the story itself doesn’t (at least from what I saw) have that instant intrigue that you got from meeting Pagan Min or Vaas. That being said; the opening sequence easily rivals both other games as you and a friend walk through a herd of gigantic mammoths, looking for one to stray from the pack in order to pick it off and bring it down. The scale and general beauty of this scene is incredible, sneaking around mammoths that are towing above you is a great way to start things off. Once you do bring down a mammoth with the help of some friends, things go to pot. A tiger attack leaves you wounded, alone, and not really sure what to do. Eventually you find some tracks of Wenja (fellow members of your tribe) and they eventually lead to you finding Sayla, a Wenja who walks alone after being forced out of the area by the Udam tribe. Another tiger attack later and you become besties, so she sets you on the main quest of recruiting more Wenja to come and join your village.

From what I can tell you will be adding people to your village throughout the entirety of Far Cry Primal. Certain story missions and almost all side missions (or random events) will grant extra villagers, which are sure to get some bonuses for you, although the only one that I could figure out is that you need a certain amount of villagers to build certain building upgrades in your village. But before you can get around to doing all of that you need to recruit the first new member of the village, Tensay the shaman, though your visit doesn’t quite go as you might expect.

After locating the Tensay in his cave, he seemingly drugs you, which results in a crazy trip where you end up flying around after an owl. After soaring through some spectacular vistas and seeing some glowing wildlife (while dealing with the somewhat iffy flying controls) you eventually tame the owl and he becomes the first animal you can control, using it to scout out areas and tag up enemies. Then, after quickly going to tame your first real animal (a big wolf) and learning how to command your beast, you return to the village with Tensay to find that the Udam tribe aren’t exactly happy you are here.

The Udam tribe decides to pay your village and this is where we first meet Ull, the leader of the Udam and one of the two main bad guys. The massive, hulking brute of a man who could seeming challenge Brock Lesnar in terms of size and a menacing look grabs you and tells you to get off his land otherwise he will kill you and all of your villagers. Ull is certainly a departure from the villains in previous Far Cry games. He doesn’t seem particularly clever, instead relying on physical superiority to keep his followers in line, and his bloodied and burnt appearance shows that he has clear weaknesses. Ull is certainly intimidating, but seems to lack the interesting characteristics that both Vaas and Pagan Min had. After a couple of fights with the Udam (after Ull has quickly scarpered away) and the burning of one of their camps, our build skipped forward an undisclosed amount of time.

Back in the village, a routine check in with Tensay turns into an incredibly uncomfortable scene as he tends to a tribe member who has been burnt to a crisp but is still alive. Tensay explains that another rival tribe, the Izila, have started burning any tribesmen they find, and then, as you hold the burn victim down Tensay snaps his neck right in front of you, to put him out of his misery.

Understandably you go looking for revenge and after another quick skip forward we find ourselves outside one of the Izila’s main camps, where they appear to be holding some of our guys in cages. As we try to infiltrate the camp via a river, a group of guards drags a Wenja across a bridge, with Batari, leader of the Izila in tow, and you quickly realise these people are not to be messed with. After not getting the info she wants, Batari disappears and instructs her goons to burn the Wenja.

Batari seems like the direct opposite of Ull. She’s not intimidating (in stature) at all, instead using her followers to do most of the dirty work. Deemed to be a descendant of the Sun Goddess, her followers will do whatever she says, even if that means burning people to within an inch of their life. Unfortunately, our hands on session ended before we got to find out more about Batari and why she wants to burn all the Wenja.

I’m sure that with more time to get to know them, both Ull and Batari will explain their reasoning for wanting to kill you, but right now it feels like the whole reason for this fighting is incredibly basic. Effectively it comes down to “hey these people are trying to live close to us let’s kill them”, which doesn’t exactly make you want to kill them in return – surely we could all just be friends? It’s fair to say that story wise, I’m unconvinced, but as Colm pointed out when he got to play, the gameplay itself is as good as Far Cry has ever been.

eSports! I joined God is a Geek all the way back in September 2013 and since then have spent most of my time on Dota 2, and occasionally posting the odd review, news article or totally wrong predictions for The International. When I am not playing Dota I can probably be seen watching some kind of strange eSport or begging for more Twitter followers (@MikeStubbsy if you are interested). Aside from GiaG I am a computing student, football coach and major Apple fanboy.
MORE LIKE THIS
far cry primalUbisoft