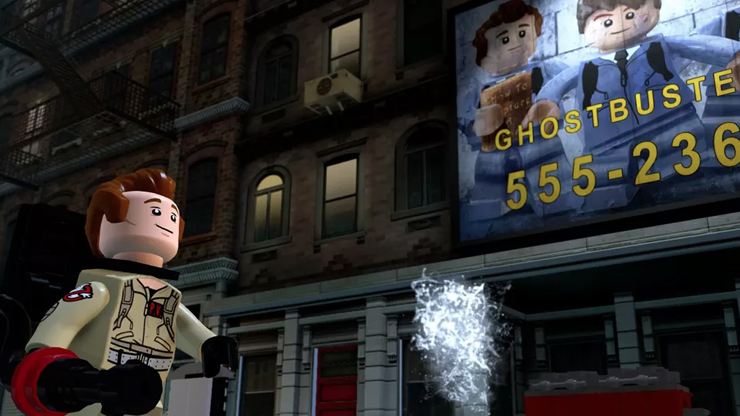 Recently, I have come to be ever so slightly addicted to LEGO Dimensions. Which is to say, a massive understatement. And I feel no shame in spending most of my evenings for the past month, building LEGO figures with my wife, and playing one of the best LEGO games in some time. Granted, LEGO Dimensions gameplay isn’t that much of a departure from the other license-based games from TT Games, but the addition of Toys To Life functionality with proper LEGO figures to build and interact with has brought me back to a type of game I thought I had my full of years ago.

And so, here I am with the latest batch of LEGO Dimensions Level, Team and Fun Packs – And it really seems like Warner Bros. Games are attempting to reel in both little and big kids of all ages, judging by the IP these latest sets are inspired by. With sets based on classic 80’s IP like Ghostbusters and Back To The Future, a set based on evergreen characters like Doctor Who and The Joker, plus a set based on one of LEGO’s more recent sets, Ninjago – There’s something for everybody in this batch of plastic bricks. So here’s what you can expect from each set:

All of the Level Packs so far have been great in different ways, with some great use of the licenses involved, and this Ghostbusters-related pack doesn’t disappoint for the most part. Apparently containing the most pieces of any of the LEGO Dimensions sets and consisting of a Peter Venkman minifig, a tiny rendition of the iconic ECTO-1, as well as the Ghostbuster’s patented Ghost Trap, this pack is just perfect for those that grew up with the ‘Busters.

A Spook Central Adventure is a pretty misleading title for this Level Pack, as this ambitious level spans practically the entire film’s plot (and took my wife and myself around the same time to play, as it would have taken to watch the film itself). It begins with the Ghostbusters’ very first callout and continues through most of the major plot points of the film, leading up to the insane battle with the Stay Puft Marshmallow Man himself.

As expected, the quirkiness of the subject matter translates incredibly well to the world of bricks and minifigs, with some pretty funny jokes stemming from excellent repurposing of several audio clips from the movie. While this level is lacking in enemies to fight, and the street-based intermissions are a little empty unless you’re after Studs (and you probably are), there are plenty of great puzzles and some great movie-inspired set pieces. Being able to drive around in the ECTO-1, with that easily-identifiable siren screeching out, never fails to please, and the Ghost Trap is very well-implemented, as you are able to trap ghosts in your Proton Beam, physically lay the Ghost Trap on the pad, and pull the ghosts towards the in-game trap. It’s all incredibly well-thought out, and the whole package makes for one of the better Level Packs around. With the Suicide Squad movie on the way, both the Joker and Harley Quinn are popular choices for Wave 3. This massive pack comes with the Joker’s Chopper and Harley’s Quinn Mobile, which are admittedly fairly generic when it comes to abilities, but are fun to build. As for Joker and Harley, their abilities are also nothing special, so this is a pack that isn’t the most impressive when it comes to new moves, and with the DC Comics World already available as part of the LEGO Dimensions Starter set, there isn’t anything new in terms of levels. However, fans of the characters will want to snap these figures up (if you don’t already have other LEGO minifigs of them already).

VERDICT: Great figures, but not an essential pack to purchase.

Back To The Future Fun Pack – Doc Brown

We’ve already had a Level Pack consisting of Marty McFly, his trusty Hoverboard and the legendary time-travelling Delorian, and now it’s time for the famed and eccentric inventor, Doctor Emmett Brown to take the world of LEGO. Also included in the box is the Travelling Time-Train from Back To The Future Pt. III, and the abilities of both are quite useful. Like the Delorian, the Train is able to trigger Time Travel switches, and also standard Acceleration Switches. Meanwhile, Doc Brown can take advantage of Hacking, Fix-It, Technology and Drone abilities, making him a very versatile character. As with all LEGO Dimensions sets, this unlocks access to a character specific hub level, in this case, it’s the Back To The Future World, consisting of a Hill Valley in the past, present and future! With quips voiced by an ageing Christopher Lloyd, this is one set that earns massive nostalgia points for those of a certain age!

VERDICT: Great for fans of BTTF, and for those who need the Drone ability. There are a ton of Ninjago sets available, but this is probably the most desirable of the lot, based on abilities alone. Consisting of Sensei Wu and an awesome Flying White Dragon, even as someone who knows nothing about Ninjago, this is certainly a very cool set. The Flying White Dragon can use the very useful Flight ability, which is incredibly useful for nabbing hard-to-find bricks in hub levels (like the included Ninjago World), while Sensei Wu has an awesome array of abilities including the Ninjago-exclusive Spinjitsu, Stealth, Pole Vault and Acrobat. If you want to get one Ninjago set (and you probably do if you want to see everything LEGO Dimensions has to offer), make it this one!

VERDICT: Buy if you want to unlock the Ninjago hub level and Spinjitsu abilities.

This Fun Pack contains two of the Doctor’s deadliest rivals, a Cyberman and a Dalek! This set makes a decent complement to the Doctor. While the Dalek only has the Target ability, this pales in comparison to the Cyberman’s massive array of abilities such as Hacking, Technology, X-Ray Vision, Mind Control, Underwater Swimming, Drone and Silver LEGO Blowup. That’s a lot of abilities for one character! He’s one of only two characters to be able to use the Drone ability (the other being Doc Brown), so you’ll want at least one of these Wave 3 sets of you want access to every Gold Brick.

VERDICT: A great set of abilities, worth looking at.

Want to see these sets in action? Look no further for nearly 10 minutes of LEGO Dimensions Wave 3 Gameplay!

A veteran GIAG member, I've been writing, talking and taping for the site since 2011
MORE LIKE THIS
Back to the FutureDoctor WhoGhostbustersHarley Quinn