Ultra Despair Girls is both the best and worst of Danganronpa 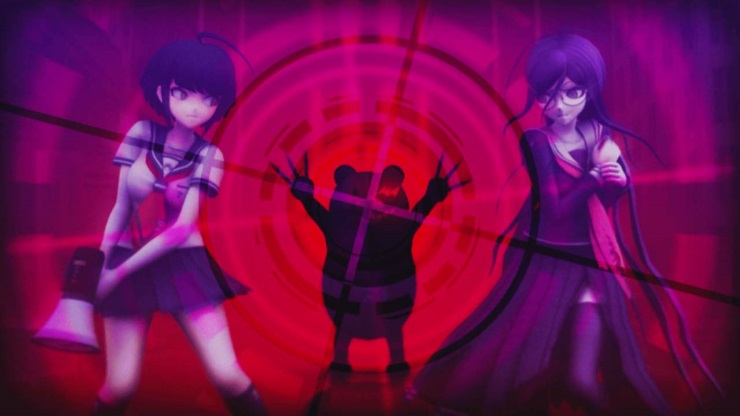 The original Danganronpa is one of my favourite games. It came out of nowhere and wowed me with its stylish aesthetic, excellent soundtrack and morbid scenario, not to mention its fast-paced take on trials (ala Phoenix Wright). I was gripped by it, the excellent characters, brilliant writing, and thankfully none of the terrible stuff you’d normally associate with Japanese games, especially those with an anime art style.

That was what made Danganronpa 2 a disappointment for me. The writers and artists decided to insert all manner of panty shots, boob groping, and embarrassing sexual moments (otherwise known as ecchi) into the sequel – something the original never needed – which made it an embarrassing game to play when on public transportation. It didn’t help that the 2.5D cut-scenes for the punishments weren’t a patch on the excellent ones from the original or that they really went overboard with the gross-out nature of the morbid themes.

Danganronpa – Another Episode: Ultra Despair Girls drops the gross morbidity of the sequel, but is not short of its own periods of discomfort. Characters have a great way of showing just how disturbed they are with some moments that really made me shudder at times. Story-wise, the game’s top notch, has a great lead character in Komaru Naegi (the original protagonist’s sister), and it really communicates the growing relationship between her and Toko Fukawa superbly. When they have their chat on the balcony at the end shortly after Toko stops Komaru from destroying the controller, you really do feel that they have a strong bond between them. Not many games do that these days. Ultra Despair Girls also gets the idea of the antagonists right. The ‘Warriors of Hope’ consists of five children – Masaru Daimon, Kotoko Utsugi, Jataro Kemuri, Nagisa Shingetsu, and Monaca Towa – each one has had a troubled upbringing and as such none of them trust adults any more. So, between them they set out to kill all the adults in Towa City to create a ‘paradise for children’, a place where adults will never hurt them. It’s completely illogical, but that in itself is logical. Children are illogical beings, and arguing with them over anything can be like talking to a brick wall. So whenever reason breaks down in conversation it feels like that’s how it should happen.

Where it all goes wrong however, is how it portrays the abuse that the antagonists have suffered. Masaru was beaten black and blue by his alcoholic father, Jataro was oppressed by his jealous mother who forced him to wear a mask and resented him for preventing her from enjoying her younger years, while Nagisa was forced to study to exhaustion by his over-demanding parents. The abuse these children faced is repeatedly shown in a serious tone, with the boys breaking down in tears screaming as they recount the abuse and how it has affected them. It can be quite powerful and makes you feel for the poor kids.

Then, there is twelve year old Kotoko, out of all of the Warriors of Hope she has the happiest demeanour. The mood she constantly radiates is all apparently an act so people don’t see how upset she really is. She was a child star, but during this she was sexually abused. Her mother would prostitute herself and her daughter together as a ‘mother-daughter deal’ and sell Kotoko to men who wanted to use her. Unlike the boys however, Kotoko is portrayed primarily in a jokey, jovial manner. Shortly after being given this insight into Kotoko’s trauma she abducts Komaru by breaking into the base of The Resistance. After knocking her out, Kotoko stands above Komaru’s prone body stroking a ludicrously large pink gun saying “The smooth shaft! The fresh pink colour!” – a rather obvious double entendre. Komaru then finds herself in a special ‘torture’ chamber. However, unlike regular torture, this one is a series of hands that poke and grope at our protagonist, as grunts, groans and Toko’s fantasy music plays in the background. During this scene the player is encouraged to slap away the hands that come onto the screen before Komaru’s pleasure gauge gets too high. Recently the UN has started putting pressure on Japan to change its laws on images of child abuse. The creation and distribution of them is banned, but there are currently exceptions for manga, anime, and videogames. The main argument is that drawn or virtual children are not real, but this doesn’t matter. Sexualised images of children (regardless of medium) are wrong and have no place in mainstream media regardless of country and culture. I can only hope that they pay attention to the UK’s requests, as I could really do without this sort of thing in one of my favourite videogame franchises.

Some developers do make changes to this sort of content; recently Monolithsoft changed the design and age of the character of Lin in Xenoblade Chronicles X as it gears up for its release in the UK. It’s hardly surprising considering what the original design looked like, and that her original age was thirteen. Granted her new age of fifteen is still under-age, but the sexualised costume is at least gone for the western release.

Danganronpa 3 has been announced along with an anime, for which I cannot wait. But I do hope that they can bring themselves to keep the mature themes but drop the sleaze – and definitely leave children out of it.

A lover, not a fighter and an all round good guy (he would say that, he wrote this after all), he's happy to be here as part of GIAG.
MORE LIKE THIS
Danganronpa