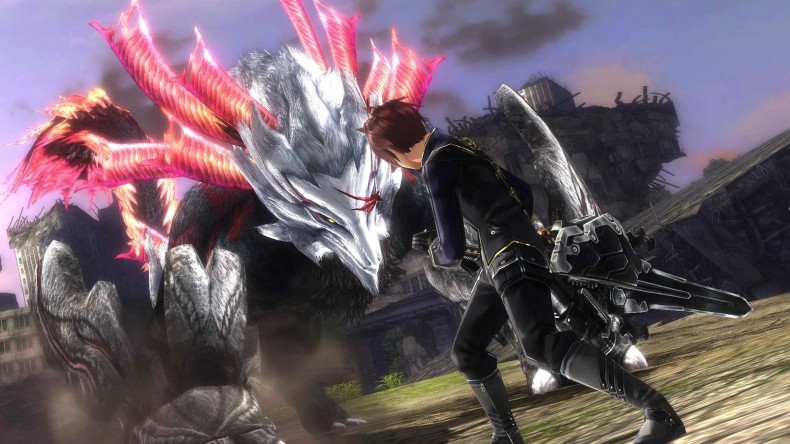 GOD EATER. Just listen to that! How majestic and awesome it sounds. The name alone should be enough to coerce any JRPG fan into at least taking a look, and wouldn’t be out of place in a Dark Souls game. The premise of the series is spectacular yet it feels doggedly familiar: it’s the end of the world, Earth has been invaded by monstrous creatures called Aragami and humanity’s last hope are the God Eaters—specially trained fighters tasked with eliminating this threat.

On paper, God Eater: Resurrection sounds great—reminiscent of the David vs. Goliath combat found in similar series such as Attack on Titan. When translated into a video game, these ideas don’t work as well as they did on said paper but the gameplay is not God Eater’s most limiting factor.

God Eater: Resurrection was released in Japan under the name God Eater back in February 2010, on PSP no less, and boy does it show. Playing through a couple of tutorial missions, it was hard to miss the glaring signs that this was a ported handheld game. It felt like I was playing a PSP game with a PS4 controller. While graphics have been upscaled somewhat, they are nowhere near what has come to be expected on PlayStation 4. While we weren’t able to play the Vita version, I can’t help but feel it would play a title ported from it’s little sister far better than the supercharged PS4 could. Although I understand that porting handheld games to console will never draw a great amount of visual clarity, a game like God Eater would benefit so much from players being able to be immersed in a realistic world. Instead I felt disconnected, and subsequently uninterested. Gameplay is enjoyable for the most part, if not repetitive. Aragami have plenty of health, so battles can drag on and become boring when you’re repeatedly using the same moves. Perhaps the most thrilling part of combat is the ability to mutate your weapon. One minute you can get up close and personal with a huge claw, and then next you’re able to play it safe from a distance with a gun-like weapon. You’re also able to turn your fist into a giant set of jaws, sapping energy from Aragami and charging your own power moves. Targeting and controlling the camera takes a bit of practice and by the end of my time with God Eater, it was still frustrating me to no end. Whether this was operator error or an actual in-game issue, I couldn’t decide.

As I said in my Sword Art Online: Hollow Realization preview, I don’t feel that demos of video games can do any justice however. More oft than not, they drop players into the throes of action without a single explanation of that is happening in the story, or how to even play. It’s with regret that I say my expectations for God Eater were dashed, with the promotional images and movies presenting a far grander version of the actual product. I will acknowledge that this was only a very short demo, though, so of course there is potential for the game to succeed my expectations come full release. Despite its exciting premise and promising vision, God Eater has so far failed to deliver an adaptation worth screaming over.

Currently an English, Journalism and Creative Writing student at the University of Strathclyde. Based in Glasgow, I spend most of my free time playing video games ranging from Japanese visual novels to horror games. You can contact me at greg@godsiageek.com!
MORE LIKE THIS
Bandai Namcogod eatergod eater resurrectionPreview