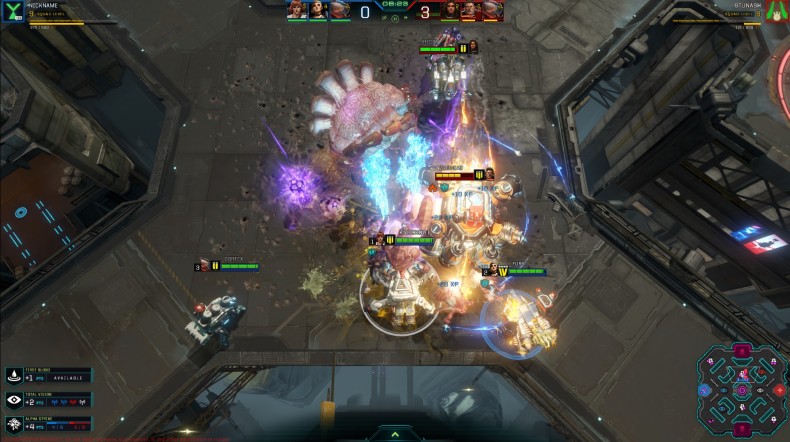 Karlsruhe, Germany, July, 22nd, 2016 – Leading European video game publisher Gameforge in partnership with Sparkypants Studios is providing select players with early access to Dropzone through its Closed Beta Test.  In this ground-breaking RTS experience, players outfit their squad of three Rigs with specialized gear to face each other in adrenalin-fueled 1v1 battles and race against the clock in the most intense 15 minutes of RTS action ever to hit the PC.  Furthermore, top ESL-Streamers will square off in Cologne, Germany at the ESL Studios to put their skills to the test as they match up against each other.

Sign up for a chance to receive an exclusive beta-key here:http://www.playdropzone.com

15 Minutes of Fame on Twitch
A highly competitive title, Dropzone combines popular RTS mechanics including intense 1v1 action, multi-unit control, deep strategy and attention management with extensive ability customization, pilot leveling, positional play and tactical action found in MOBA-styled games.  Underlining the competitiveness of the game, Gameforge, Sparkypants and ESL have teamed up to stream the first-ever Dropzone tournament on Saturday July 23rd at 12 pm CET. All viewers of the stream have the chance of grabbing some of the first beta-keys to be handed out during the stream. “The participants of the tournament include RTS veterans, famous MOBA players and ESL streamers.

Powered by Sparkypants Studios own Sparkle Engine, a game engine built from the ground up for competitive online play, players command a squad of three individual, highly-specialized Pilots each operating a unique Rig in 15 minute head-to-head matchups of strategy and skill.
“Dropzone delivers that adrenaline rush and individual excellence that comes from the classic 1v1 competitive experience we have always loved.  We like to have it all on the line where the individual player is responsible for winning or losing,” says Stuart Jeff, Design Director, Sparkypants Studios.  “With all the hard work and love we put into the game every day, it’s exciting to open Dropzone up for more players.  We’re looking forward to the feedback from beta participants, as well as these tournament match-ups and what Pros and professional Streamers can do in our game as together we take Dropzone to the next level.”

On a Distant Moon

“It is the 22nd Century. All of humanity depends on a rare and powerful energy source called Cores mined from Jupiter’s moon Europa—but Europa has fallen. Now corporations, entrepreneurs and all freelancers fight the hostile Alien Kavash (and sometimes each other) to scavenge Cores and cash in on the new “Core Rush”. Doing so requires powerful mechanized Rigs, specialized gear and highly trained pilots to explore the surfaces or Europa and retrieve the cores from the Kavash.”

Dropzone is the first, new game IP from game developer Sparkypants Studios, comprised of seasoned RTS veterans of Big Huge Games. Dropzone brings together classic attributes of Real-Time Strategy such as map control and multi units the player must direct, with 1v1 intense online competitive play and familiar keyboard and mouse controls.  Players must develop their tactics, customize their Rigs to suit their play-style, and then bring them into battle against their opponent to see who can score the most points during a 15-minute match.  Dropzone provides for a vast array of choices between Rigs and their load-out, and rich variety of maps set on alien-infested Europa over which players will contest. Dropzone is set for a 2016 release as a free download for PC. You can read more at http://www.PlayDropzone.com/.