5 things that would make No Man’s Sky much better 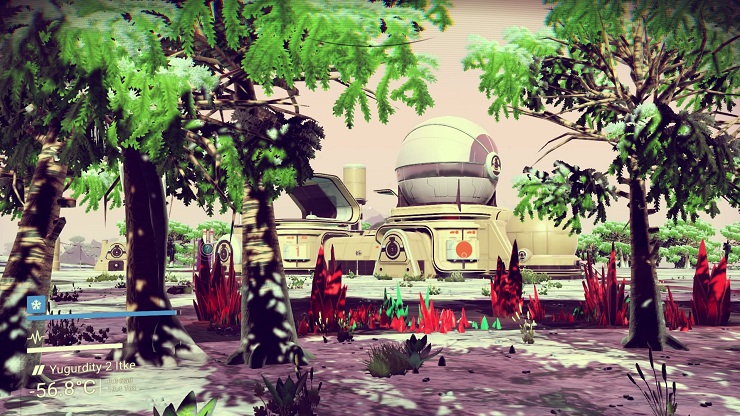 No Man’s Sky has been met with some pretty harsh criticism, with many complaining that there’s little to do in such a huge universe. It’s an absolute joy flying across star systems and exploring the tiniest fraction of all 18 quintillion planets on offer, but it does feel hollow, no matter how much you try and deny it. Staying power doesn’t seem to be the game’s strongest suit, so I’ve put together a list of some of the things I think would make No Man’s Sky a much better game all round. There will be DLC and updates over the coming months and it would be nice to see at least some of these things make an appearance.

Similar to Fallout 4, it would be cool to build a small settlement or base of operations on one of your favourite discoveries. I found somewhere that would’ve been an ideal place to settle on and it would have been nice if I could’ve called it home. Not only would it be an aesthetic improvement, it would mean somewhere to store all of the elements and items you pick up on your travels. We all know there’s little room in those exosuits, so having some place to dump everything would be a welcome addition. Essentially, having the option to fast travel between planets would be great, wouldn’t it? Say you found a really weird-looking species of animal that looked like a monkey had bumped uglys with a crocodile. Wouldn’t you want to go back and marvel at them? Wouldn’t you want to go and say hi to the weird hybrids you named inappropriately? It’s a laborious task travelling to space stations to trade, or going back to planets you knew had a high volume of the element you needed to mine, so wouldn’t it be easier to get there a hell of a lot quicker than flying there manually? It begins to grate after some time, and having the option to fast travel would surely alleviate the annoyance. If you’ve got to travel across the galaxy, how awesome would it be to wander around your spaceship like you’re captain of the Normandy or Millennium Falcon? Set up autopilot then go chill in your ship’s lounge area. Fancy a snack? Go whack on the space oven and toast a couple of crumpets. The ships are small and manageable at the moment, but I just think it would be better if you could pilot a bigger ship, capable of allowing you to do more than just sit in the cockpit when travelling great distances. No matter how much exploring, fighting, surviving and trading you’re free to do, it all feels a bit empty and lonely. The aliens you do meet are only in the same jaunts on every planet or galaxy. Why can’t we have them wandering around the planet too? Why can’t they be more animated when you do bump into them? I’d love to be able to interact to some NPCs at a trading station or even on a planet with a relatively safe ecosystem. What if it wasn’t just the sentinels who are hostile?

OK, so there’s been a bit of confusion in the run up to the game’s release about whether or not there would be any element of multiplayer in No Man’s Sky. Currently, there are absolutely no multiplayer or online features outside of the ability to upload your discoveries and it’s a damn shame. Please Hello Games, please Sean Murray, let’s make this happen! I know how big this universe is, and I know Sean has said how unlikely it’ll be that two players will ever bump into one another, but I’ve already found planets named by other players and there has been an instance of two players trying to meet on the same planet. I just think being able to explore the universe with a friend, or having a dogfight with a stranger or even seeing this huge galaxy populated with real people would make this game feel more alive. I love exploring on my own, but having these options available just opens things up a bit.